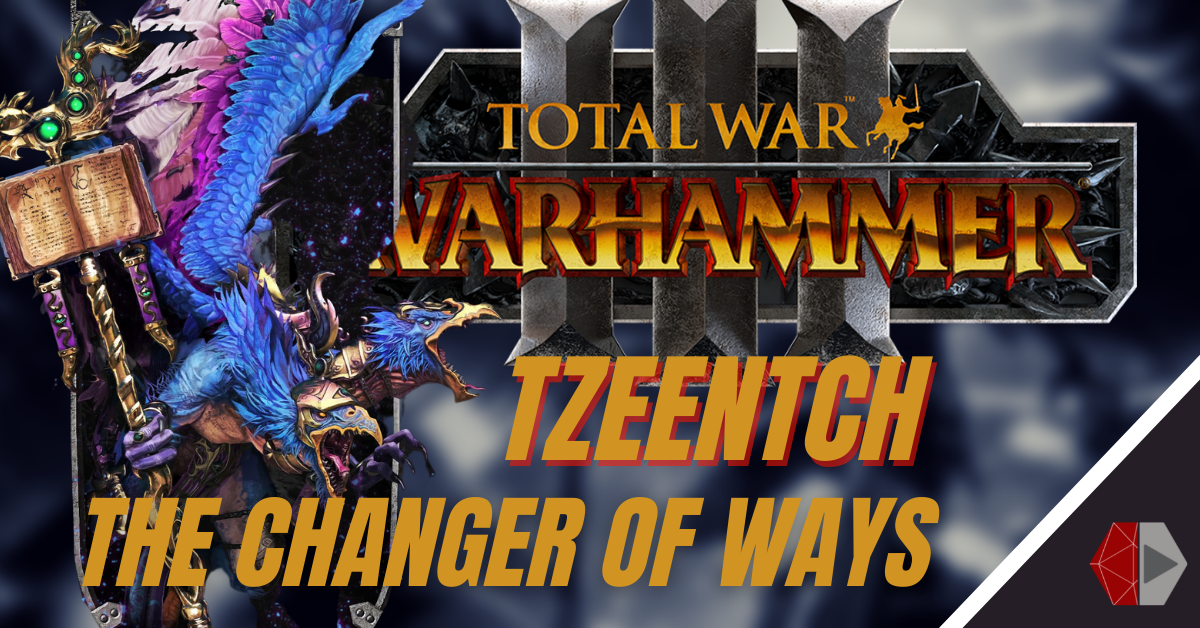 Tzeentch is one of the four Daemonic factions in Total War: Warhammer III. Tzeentch himself is the mastermind of all schemes and sudden changes in the mortal realm while Kairos Fateweaver the Legendary Lord of Tzeentch is a master of deception, magic, evolution, and manipulation. He is flux incarnate the God who truly embodies the endless, broiling change that is Chaos. It is Tzeentch above all who holds the terrible knowledge of fate and destiny in his talons. His grand scheme can alter the destiny of his ally and enemies. Let’s try to uncover the grand scheme orchestrated by the Master of Manipulator, the Changer of Fate Tzeentch. Read on for our Oracles of Tzeentch Overview!

Kairos Fateweaver, the Legendary lord of the Oracle of Tzeentch, is the only playable character in the Tzeentch faction. Kairos is a master of deceptions, manipulation, and a supreme spellcaster. This Legendary Lord wreaks havoc on the empire of Grand Cathay with his army and powerful spell unique to his factions: the Lore of Tzeentch.

Here is the list of spells in the Lore of Tzeentch

Tzeentch – the Changer of Ways – is the Chaos God that schemes his way to victory. The Tzeentch faction can manipulate the diplomacy of any faction and can even break their alliance when needed. They can also manipulate the magic in the land to increase magical reserves in battle. Tzeentch can influence the action of your enemy and ally by transferring a settlement, halting an enemy movement, or revealing the enemy’s plans. Basically, the Tzeentch game style is to weaken enemies by forcing them to fight someone, or by changing their course of actions. In the campaign map, you will want to plot, deceive, betray, and manipulate your way to victory. However, when everything fails you can still defeat them in the old-fashioned way of brute force fighting.

Tzeentch armies have barriers that can be generated or replenish when depleted. Have I forgotten to tell you that most of their units are capable of dealing ranged damage? Well with the barrier plus and missile supremacy, you can dominate your army by ranged bombardment. Then when they are near you can distract them for a bit with your land or flying cavalries. While your enemy is distracted you can run or reposition your ranged unit for a better shot. Once in position, you can now command the cavalries to run and replenish their barrier in preparation for the next assault. You can repeat this process until your enemies flee.

Magic Manipulation enables you to influence the Winds of Magic in the region. This is a great mechanic for Tzeentch because almost all your units will benefit from it. You can maximize the Wind of Magic to the region you are most active in and lessen it in an area where you are not. This could greatly benefit your spellcaster as they can cast more spells in battles.

Changing of the Ways

Changing of the Ways is a unique mechanic in the Tzeentch faction. With this, you can easily disrupt your enemy’s and ally’s actions. This feature will be the centerpiece for all the grand schemes you will do during the playthrough. Here is the list of what you can do to your enemy and allies.

As chaos corruption spread throughout the mortal realm, you will get a chance to establish a cult in a faraway land. This will happen by chance if you are not using Slaanesh. Within these cults, you can construct a special infrastructure, buildings that generate resources passively. These are the buildings you can construct in the cult of Tzeentch:

Tzeentch’s tech tree is a bit more complex like a spider web, spreading out from a center. Nothing the Master of Change and Manipulation does is ever simple or straightforward. Each area of the tree is unlocked by one of the central techs, and then has a couple of looping paths that lead to the final tech. Well, you can just click the final tech you want to research. This will automatically create a path to research your desired tech and all of its pre-requisite.

As a Master of Change and Manipulation, one can assume that you can manipulate the diplomatic relationships of your faction. However, you can only influence some of the diplomatic ties of the other factions. Yes, you can change the ownership of an ally or enemy’s settlement once every 10 turns, or force them to break their current alliance with another faction. Yet, no matter how you manipulate them they won’t alter or change their relationship with you. You can befriend all other Chaos Factions, but the human faction especially the Grand Cathay will never stop fighting you until either one of you perish from the map.

The Changing of Ways in Tzeentch mechanics is so overpowered that when used right, you can easily destroy an entire faction without sacrificing any of your units. With different ways to alter the movement and action of enemy factions as well as your allies. You can easily avoid any undesirable battle combined with the Teleport Stance that is only available to the Tzeentch faction. Allowing you to also easily ambush any unsuspecting foe. This makes the game feel more like a battle of wits rather than a battle of might.

That’s it for our Oracles of Tzeentch Overview. We hope this will provide you with useful information should you try the faction out. You can also check out our other overviews below: