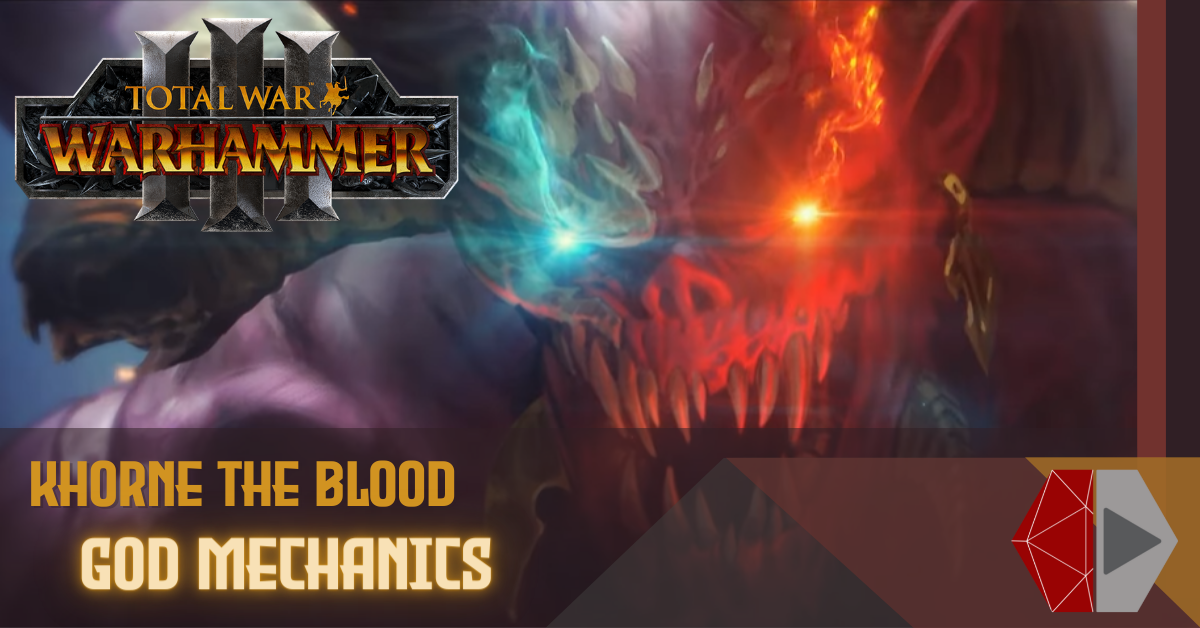 Want to pledge your life to the Blood God? Then here’s our Total War: Warhammer III Khorne Guide!

There are 8 factions you can choose from in Total Warhammer III; Daemon of Chaos, Grand Cathay, Khorne, Kislev, Nurgle, Ogre Kingdoms, Slaanesh, and Tzeentch. In this article, we will talk about the faction of the Blood God Khorne. In Total War: Warhammer III’s Khorne campaign, you will play as Skarbrand the Exiled One, the Greatest Daemon follower of Khorne. Skarbrand was banished from the service of the Blood God and cast out from Khorne’s domain. Tormented by his downfall, Skarbrand now wanders the mortal realm and kills everything in his path as an offering to regain Khorne’s favor. With that here’s our Total War: Warhammer III Khorne Guide.

If you are a warmongering person, then Khorne’s Faction will be the best choice for you to start your Total War: Warhammer III experience. Khorne’s unique traits and skills are all focused on one thing only, and that is WAR. In the early game, all you need to do is kill every enemy you see. Khorne’s unique ability is that after you successfully raze an enemy-occupied city, your armies will regain all of its movement so that you can proceed to attack another army or city. Every victory you achieve will only make you stronger. So yeah, basically, Khorne’s general playstyle is that you fight, kill, pillage, raze, kill again, fight again, and last but not least is fight again.

Skulls for the Skull Throne

As you can see technologies in Khorne’s faction will require you to offer some skulls to research them. Most of the technologies are about how to strengthen your armies, like giving a buff to your blood host, buffing your units, making them cheaper, faster recruitment, and faster replenishment rates. You can also gain Skulls per turn in return for everyone hating you, but hey, why would you need to befriend them anyway when sooner or later you will offer their skull to the Blood Lord.

Blood host is the armies that spawn when you raze a settlement. You can’t change edit the contents of the armies that spawn. These units will deteriorate over time so treat them as expendable units. The size of the Blood host depends on your leadership skills and technologies. The Bloodletting also applies to the spawned Blood host. Even if you can’t add or remove any unit in the blood host, you can still merge their unit to lessen your upkeep.

Khorne’s army has a good roster of melee troops but they lack range units. As such a special mention to the only ranged unit, in the Khorne army, the Skullcannon. Due to the lack of ranged units, Khorne’s forces will need a lot of mobility to outrun enemy missiles and minimize casualties.

As chaos corruption spread throughout the mortal realm, you will get a chance to establish a cult in a faraway land. This will happen by chance if you are not using Slaanesh. Within these cults, you can construct a special infrastructure, buildings that generate resources passively. But the most important feature of this Cult for Khorne’s faction is that you can build an arena that allows your faction leader and his army to teleport to the settlement. This allows you to attack or wage war with factions out of your reach.

Khorne can still ally with other daemonic factions but there are always rivalries within them, The people in the mortal realm do not fancy the chaos invader and will declare war as soon as possible. As such, this faction will have a difficult time managing diplomacy because everybody hates them. They also have a deep hatred towards the Slaanesh faction. Though, why would you bother being diplomatic when you’ll raze their cities anyway.

The Khornate faction is difficult to use if you prefer to be passive. Khorne requires you to fight endlessly and will punish you if you are not fighting for a prolonged period of time. Blood host combined with the Bloodletting is too overpowered in the early game, and almost no one can face your combined army. As you attack their settlement early game, your army will grow larger and larger as you raze settlement after settlement. To choose Khorne is to choose endless battle, so if you wish to pledge to the Blood God, be ready for the road ahead. That’s it for our Total War: Warhammer III Khorne Guide.

We’ll also be looking into the other factions and doing a full review of the game as well. So, stay tuned!