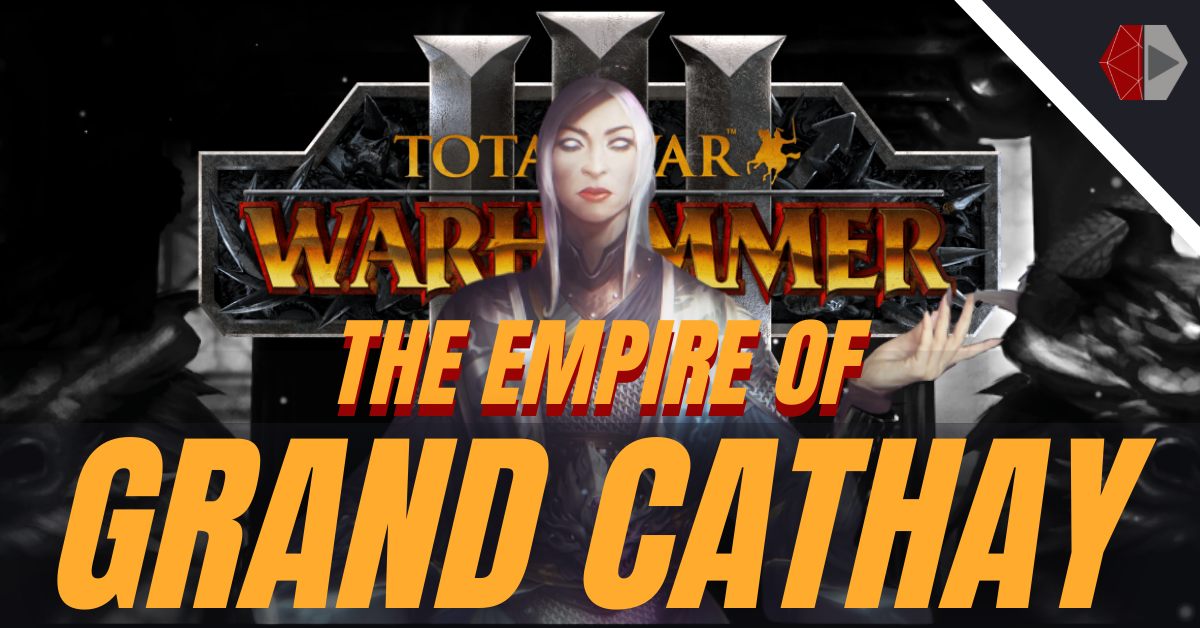 One of the two playable human factions in Total War: Warhammer III is Grand Cathay aside from Kislev in the West. They are a human faction with dragonic powers in the northern province that fight against the chaos forces. They defend the Great Bastion in the north to prevent them from wreaking havoc in the empire. Sounds familiar? Yes, because they are inspired by Chinese lore and traditions. Let’s have a look at this powerful faction that defends humanity from Chaos. Here’s our Total War: Warhammer III Empire of Grand Cathay overview.

Grand Cathay has 2 Playable characters in the campaign and multiplayer mode. These two lords help each other in defending the Great Empire of Cathay. Miao Ying defends the northern province against chaos forces while Zhao Ming defends the west against the Ogre Kingdom.

Here is the list of the spells in the Lore of Yin and Yang and also the Lore of Life and Metal.

Grand Cathay has more focus on a defensive-style of gameplay due to the relentless onslaught its cities receive. The Great Bastion in the North relentlessly besieged by the forces of Chaos while the Green Skins and Ogres assault from the west. Despite this though, they have an easy time defending their territories because they possess one of the best missile units in the game, the Sky Lantern. As you protect your territories, you will want to consolidate your empire by waging war on your brothers or sisters or by simply subjugating them. Having harmony in your empire and securing your trade route is the best way to prosper and battle the invaders.

The Great Bastion is very similar to the Great Wall of China in our universe. This wall serves as a giant barrier that repels the chaos forces from invading the Grand Cathay. The loss of this place means a relentless onslaught of the chaos factions in your cities. The Great Bastion has three gates that you need to defend: the Snake Gate, Turtle Gate, and Dragon Gate. You must occupy these three gates and protect them from enemies.

There are two types of chaos forces that will try to attack you. Firstly, the chaos faction living outside the wall. Second, the incursions of the various factions that will attack when your Great Bastion threat bar reaches its peak. This is what will pre-occupy most Cathay players as invasions will keep on coming unless they continue to defeat the rogue armies beyond the wall.

Ivory Road is a powerful mechanism in the Grand Cathay arsenal. This allows you to send merchants in the old world to receive money upon completion of the trade. The further away your trade route is the more dangerous its path will be, but the more bountiful the returns. Your Caravan will get hit by bandits as it traverses a dangerous route. Along the way events may happen that can help or hinder your Caravan’s journey.

When you hire a Merchant, they already have a set of units attached to them that you can’t change by normal means. The only way to make them stronger is due to various events happening along their path without our control. Merchants don’t have any upkeep so you can hire as many as you want. But, you can only perform a maximum of 3 trade routes.

The Wu Xing Compass harnesses the winds of the magic to bring prosperity to Grand Cathay. Directing the compass fills the energy reserve and will give great buffs that decay over time. There is nothing overly special from the Wu Xing compass aside from the buffs that you get when you set it in the direction you want. It does provide you with the boosts you need depending on the situation you are in.

Harmony is Cathay’s dominating system that affects almost everything in your faction. The grand strategic goal to Cathay’s success is to maintain a balance between Yin and Yang. All lords, heroes, technology, and most buildings contribute to the Yin and Yang harmony. Obtaining Harmony will give you a massive buff that helps you in the campaign and battle. Each of these aspects (Characters, Buildings, Events, and Technology) will have its own Yin and Yang balance and you must achieve an overall balance between them all to receive the massive harmony buff.

The Grand Cathay is a very diplomatic faction, where you can be friends with almost anyone except the Chaos Factions. Trading with other friendly factions will give you that extra income to build and maintain your armies. Befriending the factions near you will be in your best interest so that you can focus your army on Chaos Invaders. You can also choose to consolidate the nearby Cathay faction thru diplomacy via confederation instead of wasting time, money, and energy subjugating them.

The Grand Cathay has a unique mechanism in their playstyle in the form of Harmony, as we’ve explained earlier. As such The Grand Cathay Tech tree can be categorized into two sets: the Yin and Yan Tech. Each tech can alter your harmonization, so be careful in choosing which one to research. The Grand Cathay technology varies from boosting your units by increasing their armor, strengthening their melee damage, or increasing their missile range. You can also benefit from the reduction of the army upkeep or increasing your building income. A good strategy to maintain balance is to alternate between Yang and Yin research.

Playing Grand Cathay is a little bit stressful, as you have the additional pressure of keeping the Great Bastion safe from Chaos Forces. Aside from that, I also had to deal with the Cathay rebels occupying more than half of the settlements in my empire. Consolidating them thru war or diplomacy still took a toll on my end. Dealing with enemies both outside and inside your empire is very hard early on.

However, once you have consolidated your empire and begin spreading your influence, the game will be a lot easier. Once you unify your territory, the next thing you need to do is secure the route of your Ivory Roads by clearing the Ogre Kingdom that lives in Mount Mourn. This will ensure your income can sustain the multiple armies you need.

With enough armies to defend the land and attack the enemy’s settlement, your Lord and their army can now focus on collecting the souls of the four Daemon Prince. The main objective in order to travel the maelstrom and fight in the final battle.