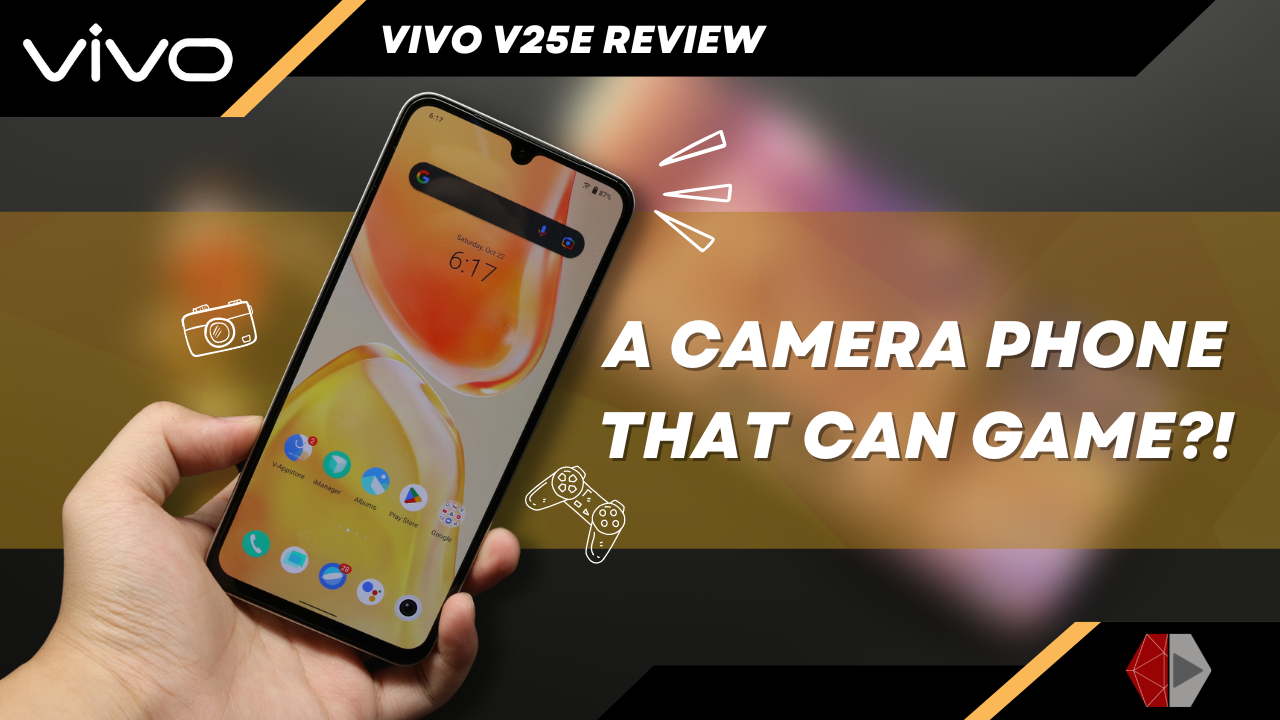 While vivo has its own dedicated gaming line already in the T series, that doesn’t mean their other phones can’t compete. Take the V-series for example, they have a deeper focus on camera and aesthetics but can still pack a punch. So, we took one of its members for a spin. Can it game or should it stay in its lane? Let’s find out in our vivo V25e Review!

If flashy is what you want to go for then you won’t go wrong with the vivo V25e or any other member of its family. The new additions to the V series feature a gimmicky yet fancy design structure, a color-changing chassis. The unit we held has the Sunrise Gold color scheme as such it changes color to match the phases of a sunrise.

Sound cheesy right? Despite that, you can’t argue that the device looks stunning and is one mighty eye candy. Take this out in public and you’ll surely turn heads every now and then. Even more so when it changes color as it reflects sunlight.

The vivo V25e not only looks good, it feels great to hold too thanks to its matte-type finish. We also appreciate that it doesn’t easily show fingerprints or smudges easily because of its color. Though, it is quite slippery so we recommend you handle it with care.

Thankfully we get a clear silicone case for better grip while still showcasing the body. We have to give props to vivo with the design of the V25 series though as they are truly elegant devices. Especially considering its price, which we’ll talk more about later.

Up front, we have a traditional AMOLED display at 6.44″ in 2404 x 1080 or Full HD+ resolution. There’s no fast response time here as that’s not the focus of the device though we do get a 90 Hz refresh rate. Even so, what you get is a crisp and clear display thanks to the AMOLED panel. The colors really pop and icons and images are sharp and detailed. So watching videos, movies, and even gaming are still enjoyable.

Audio is pretty standard as well, not entirely bad but nothing to be boastful of either. The mids and highs are good but the lows leave something to be desired. It can get pretty loud but you will notice a little loss in clarity at max volumes. Either way, it will still be enough for games that don’t require precise audio cues such as FPS or Battle Royales. If you do plan on playing those then we recommend plugging in some audio gear. Luckily, you do get some earphones out-of-the-box so you at least have that covered.

Powering the vivo V25e is MediaTek’s Helio G99 processor paired with the Mali-G57 MC2 GPU, 8GB of RAM with an additional 8 as virtual, and 256GB of storage. These are respectable specs for a phone at this price point. We subjected the device to synthetic benchmarks and here are its results:

These scores are what you’d expect from this setup. Nothing too powerful but not underperforming either. This translates to smooth performance for mundane tasks such as web browsing, general navigation, and social media. It can even do light video and photo editing without problems.

The V25e being a camera-centric phone will, of course, have no hardware to aid in gaming. However, and surprisingly, it does have game-assistive software, in the form of the vivo Game Center. This is the same one we have with the vivo T1x, as such it has the same bells and whistles. Such as an app store dedicated to games, game space, and management options for downloads and updates.

If this is your first time using game space it basically records how long and how often you play your games. You even have graphs to illustrate your playing time. We still don’t know where you’ll use this data for. Although, at least you know you have access to it. Lastly, you can directly open your games here listed from most played to least.

With the Game Center also comes the Ultra Game Mode. Which gives players a slew of options to improve their gaming performance. The Ultra Game Mode settings tab have notification muting, call muting, game surround sound, ear-customized sound effects, and a few more. We also have that game sidebar, though this one is a little limited compared to what we got with the T1x. We only get access to notifications and call muting, screen recording, autoplay with screen off, brightness, Esports mode, and screenshots.

Plus the three additional modes to tweak your phone’s performance — Battery Saver, Balanced, and Performance. Sadly they still don’t support all game genres. Much like with our experience in the T1x, mostly Esports games such as PUBG Mobile, CoD Mobile, League of Legends: Wild Rift, and so on can make use of it. Which is kind of a bummer as the sidebar does provide some much-needed tweaks if you want to game undisturbed.

Now, let’s see if a phone built for photography can provide the performance to still play games. Like always, we run some benchmark tests on the device as well as some gaming tests to fully gauge how it fares in gaming. Check out the synthetic benchmarks below. We also compare it to the results of the vivo T1x, a phone more dedicated to gaming for about half the price.

The benchmarks score the V25e got aren’t too shabby plus looking across the board it does perform better than the T1x. By this comparison, we expect that the V25e can handle games at higher graphical settings in acceptable or even good frame rates. So does it? Let’s take a look at the gaming benchmarks.

As you can see, the V25e can comfortably manage light to medium games at their highest settings possible. Battle Royale and MOBA titles reach and maintain 60fps all throughout our gaming sessions. However, it did meet its match in more demanding games such as Genshin Impact and Diablo Immortal. Where it struggled to maintain 30fps at both games’ highest settings possible. It didn’t even support Diablo Immortal’s 60fps setting.

Yet it performed a whole lot better than the T1x, a device that can only achieve 60fps on similar games if they are set to their lowest graphical settings. We do believe the V25e can hit more than 60 fps in some of these games once they support it or by tweaking your settings. Either way, the V25e can surely handle light to medium gaming at its highest settings. For heavier games, you may have to tweak the graphics a bit to achieve that sweet 60 or higher.

Now we don’t usually feature the camera in our reviews as we mainly focus on gaming, but this is what the V25e is supposed to be good at. So is it a great camera phone? It actually is, even more so considering the price. If you’re a gamer who also vlogs or stream using their phone, then the V25e’s cameras will suffice. It captures images well with good color accuracy and sharpness.

Apart from that, the camera software will also be able to cater to your different needs, whether you’re at a gaming convention or event. Especially ones with little or dim lighting, it can adapt to such while still providing good quality shots. The front camera isn’t too bad either, so it will be serviceable if you plan to use it while also streaming with the device. Overall, it does live up to its promises in this department.

If there is one thing that surprised us the most is how the V25e maintains its temperatures. Even at prolonged gaming sessions it never reached high temps, both internally and externally. When playing we only ever reached a maximum CPU temp of 40.7° and a maximum battery temp of 34.2°.

What was even more shocking though is that these are the same maximum temperatures we got during the stress tests. Externally you’ll barely feel any heat, it does warm up ever so slightly around the camera area though nothing too noticeable. As for throttling, during our tests, performance drops to about 91%, which is impressive.

Apart from the amazing camera performance, the vivo V25e also has a pretty good battery life. What we have under the hood is a 4,500mAh battery, that’s 500mAh lower than its T1x brethren. During our PCMark battery test, it lasted a good 17 hours and 15 mins, quite far from the 26 hours and 19 minutes of the T1x but still impressive.

As for real-world performance, it lasts about a day and a half to two with minimal to medium usage. Then about a day during heavy usage and gaming. So, you can still comfortably bring this with you on outings and travels without worrying too much if it’ll drain quickly.

The vivo V25e is a different type of package. It has an eye-popping, head-turning design combined with a great camera system and impressive performance. It can handle light to medium games with ease and even manage heavy ones with a little bit of tweaking. You’ll lose out on some game-centric features as even the software we get is a little trimmed down. Yet, on the performance side, it can still deliver your gaming needs. What it offers in return though is a more complete set of mobile tools.

Especially if you’re not just a gamer but also a budding photographer. Even if it’s not your profession if you’re the type who likes to also be able to take photos and moments with your phone then the V25e is a good choice. After all, this is a camera phone that can game for just Php 17,999. However, there is no arguing that there are better alternatives out there for gaming at a lower price. Although, we can assure you it won’t be as dazzling as this one.

Reasons not to get