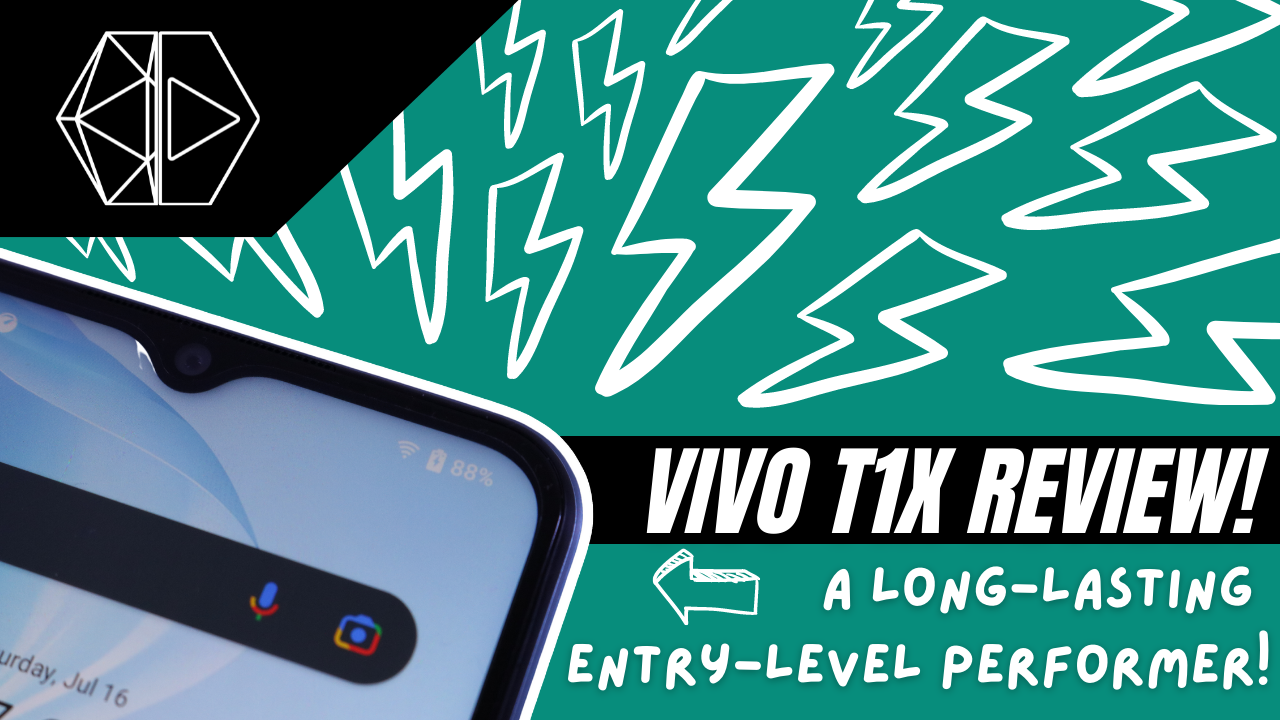 A few weeks back, vivo released a pair of new gaming phones aimed at a more budget-conscious audience, the T-series. One of the two is at the sub-Php 10k entry-level side, the vivo T1x. Does it still perform well despite its price or will the budget internals not cut it? Let’s find out in our vivo T1x Review!

Simple yet elegant is what you can tell from the vivo T1x the first time you look at it. You won’t even have guessed that it’s a game-centric mobile device. It doesn’t feel too hefty in the hands making it easy to hold. Over at the back, we have a frosted style design, it shines beautifully under light which is where the phone’s elegance mainly comes from. However, that also makes it one hell of a fingerprint and smudge magnet. Overall the vivo T1x looks good despite its budget and game-centric nature.

Handling the vivo T1x’s display needs is a 6.58″ Full HD+ screen with a 90 Hz refresh rate. A pleasant surprise as high refresh rate displays are usually reserved for more expensive devices. You have the great color reproduction and accuracy thanks to the IPS panel. Making games with colorful sceneries such as Genshin Impact and Pokemon Unite pop out. Provided you crank the settings to eye candy levels. It’s also perfect for watching movies and videos. It can go bright enough outdoors but there will still be some reflections.

On the audio front, you have standard phone speakers. No extra features such as Dolby but there are some surround sound options on the software side. While they do go loud they provide just average audio quality. Mids and Highs are present and okay but lows are nonexistent. Also, at max volume levels, you lose some clarity and at times audio comes out sounding like a tin can. So, for the best audio experience, we recommend you use some earphones or headphones.

Managing the heavy lifting for the vivo T1x is Qualcomm’s Snapdragon 680 processor, 4GB of RAM, and Adreno’s 610 GPU. Then for storage, we’re getting a measly 64GB. These are the kind of specs you expect from entry to mid-range level devices. For synthetic benchmarks we got the following scores:

These aren’t high numbers and are about the range you expect for entry to mid-range level mobile devices to perform. However, it’s still enough to provide smooth operation for mundane tasks. Web browsing and social media consumption are quick and smooth as well as general navigation. You can even do some light video and photo editing without a hitch.

While the vivo T1x does perform well for general tasks, it does have one problem — the small storage. Sadly, there aren’t any other variant with bigger storage or higher RAM in the Philippines yet, so we’re stuck with 64GB. It may have been more than enough a few years ago but not anymore. Especially when games are getting bigger and bigger in storage size. We’ve actually had to delete some of them to make room for others to test.

Games and apps aren’t your only problem too as of course you’ll still be using the phone for pictures and videos. Luckily there is support for microSD expansion if you don’t want to micromanage your storage by moving stuff to external devices or the cloud. However, you will still have storage problems for games and apps as those can no longer be stored in microSDs. So, sadly, you will have to decide what games and apps you want to keep or you have to rotate every so often.

Any phone can game provided it has powerful enough internals. However, what separates a gaming phone from a standard one is its game-centric features. Whilst the vivo T1x doesn’t have any game-centric hardware like shoulder buttons, it does have some software.

First up is its Ultra Game Mode, which also has a sidebar you can use when playing. You have a few options in the settings menu of this mode. These include notification muting, call muting, game surround sound, ear-customized sound effects, and a few more.

As for that game sidebar, there are some settings that can help you focus and enhance your gaming session. The option to mute notifications is still here but you also have screenshots, screen recording, locking brightness, and so on. The feature I love the most is the ability to quickly split my screen, though it doesn’t support too many apps. Actually, it only supports Facebook and your default messaging app.

Plus, you get three additional modes to tweak your phone’s performance — Battery Saver, Balanced, and Performance. While all of these are welcome, sadly not all games are supported by the sidebar. It mostly supports Esports games such as PUBG Mobile, CoD Mobile, League of Legends: Wild Rift, and so on. Which is kind of a bummer as the sidebar does provide some much-needed tweaks if you want to game undisturbed.

The other software you have is the Game Center. Now, there isn’t really anything here to aid you directly in gaming but it provides some information. The app has its own store dedicated to just games. Complete with its list of top and trending titles to download. However, the other unique feature it provides is game space, found under the tools tab of the app. This tab also has management options for your downloads and updates.

Now, back to game space, this section of the app provides data on your playtime. It basically records how long and how often you play a particular game. Including which ones you tend to play the most. I’m not entirely sure where you can use this data but just so you know, you do have access to it. Apart from that, you can open your games directly here and it conveniently lists them from most played to least.

Alright on to the beefy part, if the vivo T1x is a gaming phone, can it really game? Well, the answer is actually yes, however, there is a but. While the T1x can definitely play games, you will have to be content with the bare minimum. Let’s check out synthetic benchmark scores first.

Once again in this area, we got the scores we expected from the Snapdragon 680 and Adreno 610 combo. Don’t be too shocked or concerned with the low number, it doesn’t mean the T1x can’t perform. Again, it can actually game as long as you don’t expect to play everything at its best setting. Now let’s take a look at the gaming benchmarks.

As we’ve said, it can play games just not at settings higher than “low” or “lowest”. It can definitely handle less-demanding games with ease, maybe even at their highest graphical settings. However, once you go to heavier games like Pokemon Unite or Genshin Impact, you will have to stick to just the lowest preset if you want these games to even be playable. Actually, for Genshin Impact, it’s more of bearable than really playable as there are times frames drop to 20 and below. Yet, if you mostly play Esports titles like MOBAs, Battle Royales, or First-person Shooters then you can still comfortably play at good frame rates.

As you can see PUBG Mobile, CoDM, and Wild Rift all performed relatively well on the T1x. Granted, the settings are still at their lowest, but at least you won’t have to worry about performance issues. So, the vivo T1x can definitely game just don’t expect to enjoy eye candy gameplay. It’s also sad that you won’t be able to fully take advantage of that 90 Hz refresh rate screen on high-demanding games.

Okay, we know that the vivo T1x can handle gaming but can it maintain its heat? Well, surprisingly it actually does and really well too. Internal temperatures are kept real cool and they never really reached high levels. During gaming, battery temps only reached about 33.2°, while CPU temps got only as high as 45.2°. Stress test temperatures aren’t that far off too. Battery temp reached around 36.5°, while CPU temps were at 49.8°.

The same goes for external temperatures, the phone never warms up to the point where it can even make your hands sweat. You will feel it heat up near the camera area but nothing too significant. I only ever felt the back go warm during stress testing but realistically you won’t be able to hit those temps. This also translates to thermal throttling. Since the phone maintains good temps there is no significant throttling. During our test, performance dropped to only about 89%, which isn’t much of a decrease.

What is a gaming smartphone if it can’t last right? This is why battery life is also a crucial component in what makes a phone great, especially one for games. Well, lucky for us the vivo T1x kills it in this department with its 5,000mAh battery. In our PCMark battery test, the phone lasted a long 26 hours and 19 minutes, which is astounding. It’s even longer in real-world instances with just light to moderate gaming.

The phone lasts a day and a half to two if we just use it without any long gaming sessions. Three days even if we just really use it minimally. It can last you a day with heavy gaming sessions of about 5 to 6 hours. Even then you’ll still have enough for some multimedia consumption before the need to plug in. It charges quickly too, taking only around an hour and a half to two to fully charge from zero.

The vivo T1x really surprised us, despite its position in the market. This is an entry-level phone geared towards gamers, consumers who need oomph in their devices. As such, it must be able to provide what gamers need and it does but with exceptions. The phone has a great display with high refresh rate, a weight that is easy to handle, a battery that lasts days, and internals that provide just enough.

You won’t be able to play games at their highest settings but if your goal is just to be able to play at good frame rates, then it has you covered. Plus, you get some nifty game-centric software that helps maintain your focus when gaming and then some. Once you temper your expectations then the vivo T1x is a perfect companion for a gamer on a budget. After all, it does check all the boxes albeit on the lowest spectrum and is one long-lasting entry-level performer for just Php 8,999.

Riot Games, Among Us Collaboration Coming in the Second Act of Arcane