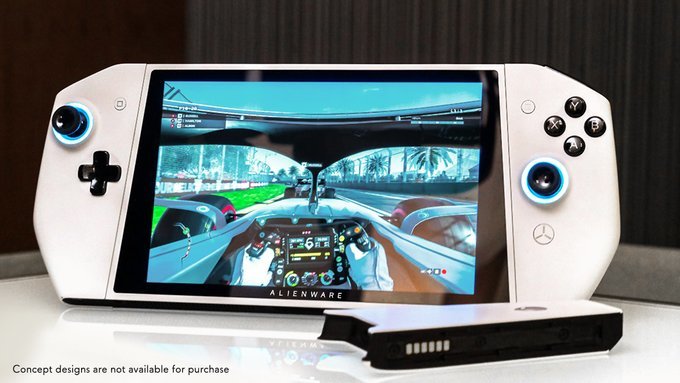 Another year means another chance at unveiling new tech innovations and CES 2020 is the best place to do so. This year Alienware turned heads by revealing their newest portable gaming project — Concept UFO. The brand’s answer to a truly portable pc gaming machine. Although, the official unveiling isn’t for a few hours, here’s what we know so far.

The very first thing that’ll stand out is probably the device’s resemblance to the Switch. Like Nintendo’s Hybrid, Concept UFO has a main screen where you attach the controllers to. In a similar fashion to JoyCons, these controllers are inserted at the sides of the device. Although in a more direct manner since it snaps magnetically. The release mechanism though resembles that of the JoyCons.

Not only that, but we’re also teased to a grip attachment should we wish to play in tabletop mode. Unlike the Switch though, the stand of Concept UFO is its entire back panel. The controllers, however, looks closer to an Xbox one rather than the JoyCons or a DualShock. We’re not limited to just handheld or tabletop gaming as the device will support external monitors and even keyboards and mouse.

Spec-wise we’re looking at an 8″ 1920 x 1200 display, only an inch larger than that of the Switch, though a step further in resolution. As this is still currently a concept there are no concrete details regarding the internals. However, what Dell did reveal is that it is running on 10th generation Intel Core processors, with support for WiFi, Bluetooth, and even Thunderbolt. Then Handling the OS is, obviously, Windows 10.

A possible release date nor pricing is yet to be revealed. Dell will be holding a keynote in a few hours, showcasing their latest innovations, this includes Concept UFO. You can watch the live keynote here. Be sure to check the rest of our CES 2020 Coverage.

The Steam Summer Sale 2019 is upon us