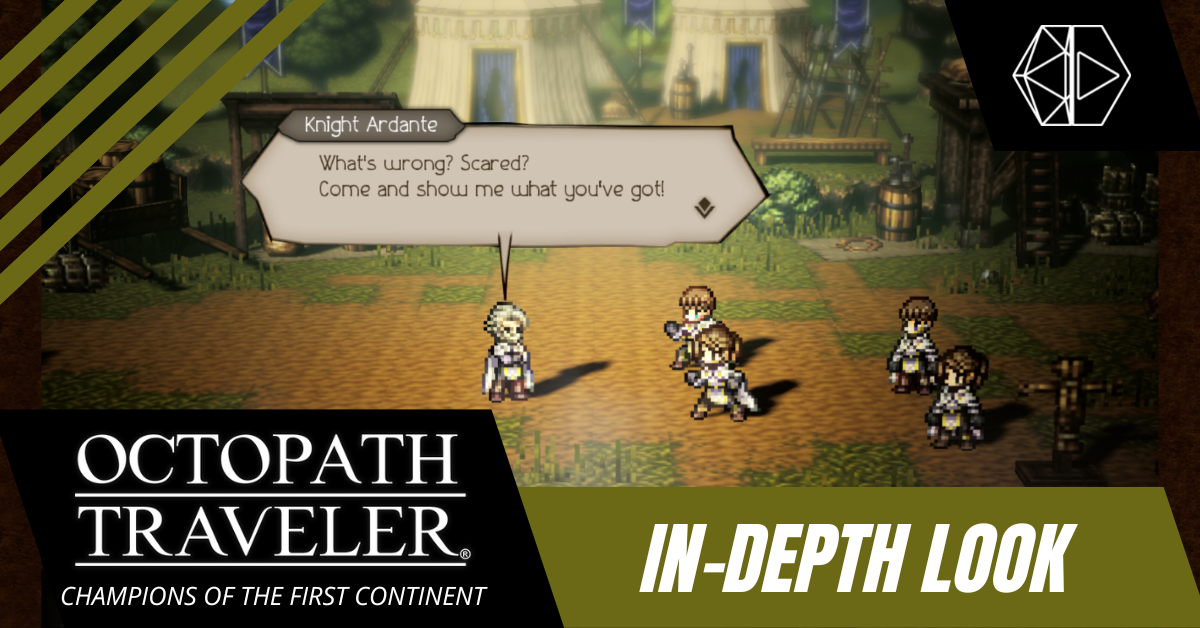 Octopath Traveler: Champions of the Continent (CotC) released about a few days ago to mixed reactions from fans. Those who were able to play had high praise and are already having fun. On the other hand, we have some who were met with disappointment as the game was apparently region locked.

Most of the Dice gang we’re actually part of those who got locked out. Luckily, one of our contributors in the US had time on his hands so he was able to check it out. So, here’s our Octopath Traveler: Champions of the Continent first impressions.

Octopath Traveler still but with some twists

Champions of the Continent is Octopath Traveler through and through. Most of the gameplay systems of the original carry over to this mobile iteration. The first of the major changes is how you move around the map. It’s not as tedious as you might think actually and requires very little touch input since you have some sort of auto-pathing. No, not auto questing like idle games but auto-pathing as in you can click on a spot on the map and your character will go to it.

Combat is pretty much the same as enemies still have weapon and elemental weaknesses. Exploiting these will still break and stun them for one turn while also lowering their defenses. The boost system also makes a return but this time you can simultaneously boost all your party members. However, the main difference from the original is that instead of a party of four, you now have a party of eight.

Sadly no, you don’t get to actively use them all in combat but rather switch between them. Only four of the eight will fight at a time. The upside to this is you can cover almost all enemy weaknesses now since you have wider access to weapon types and elements. Plus some characters have skills when placed in the back row, adding another layer to party management.

One of the unique aspects of Octopath Traveler is that your characters or travelers as they are called have special skills outside of combat. There are those who can interrogate NPCs for information or even fight some of them for rewards. That system returns in CotC although a little more streamlined. Instead of needing to have a particular member in your party, you gain permanent access to three actions dubbed influence — Wealth, Power, and Fame. These have their own levels, which dictate if you can use their respective interactions on NPCs.

Oh and much like the original if you fail interactions 5 times, you won’t be able to interact with any of the NPCs until you reset your reputation at the tavern. Characters aren’t entirely left out of the system though as they provide the points you need to level up your influence. Other ways to increase your influence are by doing quests and getting achievements. Another feature staying with CotC is quick travel. So, much like the original, you get to easily jump from dungeon to dungeon or town to town.

You have three main plots for Champions of the Continent, based on the influences. So, stories focused on Wealth, Power, and Fame. Progression is still a little bit freestyle and linear. Linear in that you do follow a path with the main quests but you will be able to play any of them without restriction. Similar to how you can choose to continue any of the story quests of your characters in Octopath Traveler whenever you like. Which is nice as you get to play freely at your own pace. By the way, the main quests are also your largest source of Influence points.

If you’ve played the original you are familiar with how the skill system in Octopath Traveler works. During fights in the original apart from EXP your travelers also gain JP or job points used to unlock skills. Now, JP is also present in Champions of the Continent although you no longer get them in fights. Instead, you get one JP every time a traveler levels up. Which you then use on a skill board to not only unlock skills but also some stat boosts and influence points. This actually reduces the grind of the game a bit as you now only have to worry about EXP. Apart from the other character growth features but more on those later.

But also a Gacha through and through

Now. while CotC is a single-player game, Square Enix sprinkled it with some gacha dust. Meaning, you get all the quirks of that infamous model mostly used in mobile games. There is no energy though so that’s great as you get to play as long as you want. However, you are met with the rest of the package such as pulling/summoning for characters and doing some grinding. Oh and of course the in-app purchases.

Here it is, the dreaded feature of gacha games that’s very similar to loot boxes and gambling. If you aren’t familiar with gacha, it’s basically a system where you use currency to randomly get equipment or characters. For Champions of the Continent, it’s the characters you guide (their term for summoning units), luckily there are no equipment gacha. Don’t hold out your breath though equipment has its own twist in this game. Now, we haven’t progressed too far yet to say if you will hit a paywall or if you’re going to absolutely need certain characters to clear content.

Right now, our party is still able to progress at a steady pace without any major hurdles. It’s also nice that they give you a 5* unit as your starter, so at least you have a carry that isn’t a fluke like most free starters in gacha games. You also sometimes get seals in some of the quests which are items used to guide units. So, you’re not left with just farming the premium currency to pull for characters. Again, we can’t say for sure yet but it looks like you can still play the game completely free without any major drawbacks.

Remember how we mentioned there are grinds involved? Yeah, so normally in a single-player game you only do grinding for EXP or maybe some powerful optional gear. In Champions of the Continent, you will have to occasionally fight mobs as they will be your main source of equipment. Why? because Square Enix has now introduced a crafting system in the game. Yeah, it’s not just going to the next town and buying their best gear here anymore like the original.

You do have interaction options with NPCs, where you can buy materials from them, fight for the materials, or convince to hand them over. However, your main source of materials will still be mobs. Oh and, no you don’t always get new gear every time you enter a town. Most of the really good ones are unlocked by getting their material first from monsters. To make matters worst, so far we’ve only seen accessories in premium bundles. So, it looks like that type of equipment is behind a paywall.

Another iconic feature in gacha games is further improving your units beyond their base stats and skills. Most games commonly call these limit breaking or awakening. For CotC limit breaking increases the level of your units, while awakening unlocks more skill slots and bigger stat bonuses. The usual formula here is you need some materials and more often than not duplicates of a unit in order to limit break or awaken them.

For CotC, you don’t necessarily need duplicates of the units to do these but they do make upgrades easier. Now you may see there are 3* and 4* variants of characters. Sadly, no there is no way to upgrade a 3* character to their 4* variants or a 4* to a 5*. The difference between the versions is that the lower star-rated one has a lower level cap but it will still have access to the max awakening potential of its higher star-rated variant. An interesting yet weird system if you ask me.

We haven’t unlocked this feature of the game just yet as it requires the completion of the first three chapters of each storyline. However, these are basically dungeons where you can grab some much-needed loot. The rewards include leaves (the money in the game), exp, and more importantly guidestones to limit break and awaken your units.

Our thoughts so far

If you give Octopath Traveler: Champions of the Continent a chance then you’ll be in for a treat. Get past all those gacha quirks and you will be greeted with a refined turned-based strategy much like the original. All of the good things from the first game are here with a few changes that are actually quite nice. Especially having those eight units as you now have a lot of flexibility in parties.

Thankfully we also don’t have an energy system allowing you to play at your own pace. You also won’t be pressured to blaze through the content and don’t have to worry about any competition. Plus the story of each main plot is quite intriguing too. Honestly, it’s literally just Octopath Traveler in mobile but with the gacha. Yet so far, we’ve been having lots of fun with it.

Perhaps the only drawback of the gacha system is if you don’t get enough units to create a diverse party. There’s also the fact that you may get jealous of other players steamrolling content thanks to getting lucky. Either way, Octopath Traveler: CotC is looking to be a solid game despite having that gacha tag. We’ll just have to wait and see how generous Square Enix will be in giving players resources. If you wish to check the game out you can download it below: