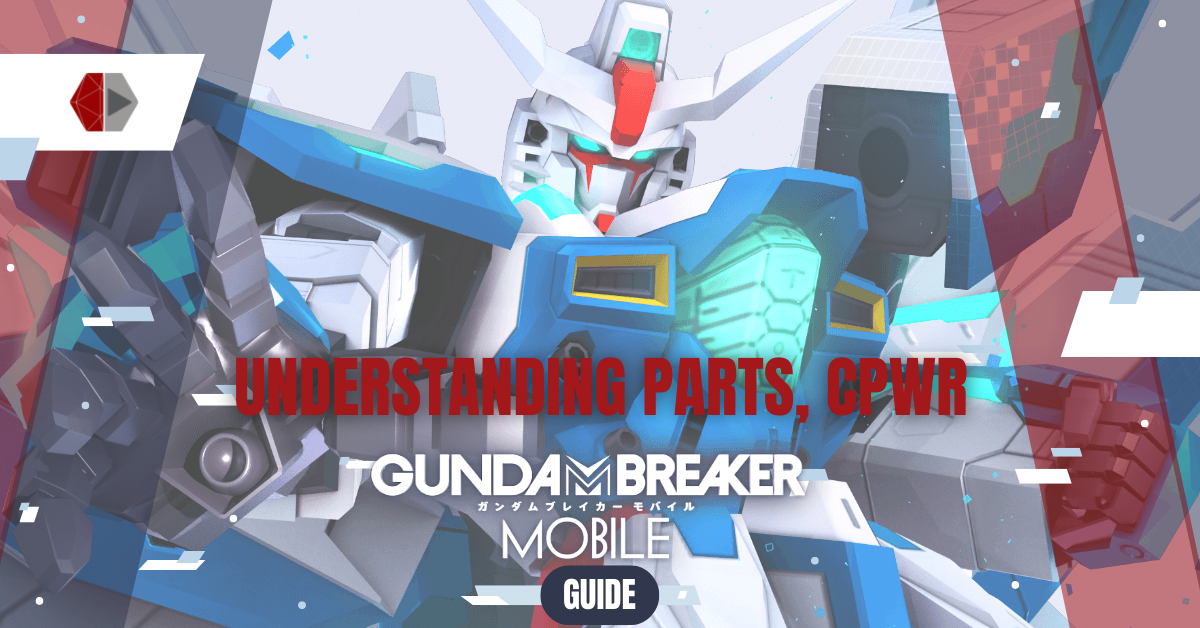 How do you build your Gunpla to better increase its combat power?

Gundam Breaker Mobile (previously known as Gundam Battle: Gunpla Warfare) released about a week ago to the delight of Gunpla fans. It introduced us to virtual Gunpla building with some battles and missions on the side. While the game does have a tutorial system to teach you the ropes, there are a few details that they missed. More so when it comes to understanding how Gunpla parts translate to CPWR or the game’s rating for power.

If you actually dive deeper into the Gunpla building mechanic, you’ll be surprised that there are a lot of factors that affect your build and ultimately a Gunpla’s combat power (CPWR). Not to worry though, we’re here to help you out in understanding what part does what and everything in between. So without further ado here’s our Gundam Breaker Mobile Build Guide.

Author’s Note: This Guide was meant to help explain to players the different aspects of a Gunpla build in Gundam Battle. It is not in any way a guide on what are the best parts or pilots to equip.

First up is understanding Attributes, which are Speed (S), Power (P), and Technique (T). A part will belong to either one of these categories, denoted by a letter on the upper left portion of its icon. They work in a rock-paper-scissors system, much like a weapon triangle of sorts. Meaning one attribute is better or weaker than the other. The triangle works like this — Speed beats Power, Power beats Technique, and Technique beats Speed. Generally, you’ll have an advantage over Gunplas with a weaker attribute and a disadvantage over those with a stronger one. So, how do you assign an attribute to your Gunpla? By equipping five or more parts of the same attribute.

A Gunpla can also have a neutral attribute, meaning it won’t be affected by the rock-paper-scissors relationship of the three. This is as long as you don’t equip five parts that share the same attribute. The biggest advantage of this is that it makes certain missions easier. Since enemy Gunplas also have their own attributes, denoted by a symbol on the upper left of their icon during sortie. Attributes won’t directly affect your combat power but will play a vital role during combat. If the battlefield is too crazy to check which Gunpla you’re facing up against, then look at the color of the target cursor. Blue means you have an advantage, Red means you have a disadvantage and, White means neutral.

Another aspect in a Gunpla build are Word Tags, which has a direct effect on CPWR. Once activated, these tags will trigger certain effects. These effects can range from increasing your melee or shot attack to increasing your melee or shot defense and even provide additional stamina. Activating Word Tags works much like how you get an attribute, by equipping five parts with the same tag.

You can view a part’s Word Tags at its overview screen (via long-pressing it). This will also show what effects you’ll unlock if you ever activate them. Activated Word Tags can be seen just below your Gunpla’s EX skills or at the sortie screen. You can only have a maximum of three tags active at any given time. As a last note, Pilots also have their own tags, so you’re not limited to just the parts.

Apart from having Word Tags, Attributes, and Ex Skills, parts and even pilots can also have various traits. These are listed and can be seen over at a part’s overview screen. Part traits work differently from Word Tags and Ex Skills, since some activate when you meet certain criteria. For example, the Nu Gundam head part boosts Beam EX Skill power by 17% but this bonus only triggers on Beam EX Skills. There are part traits, however, that just provide outright bonuses such as the Wing Gundam’s arm, which buffs Melee Damage by 8. Part traits directly affect your Gunpla’s CPWR.

This is another aspect that you can easily overlook since there is no tutorial prompt. Rather, there won’t be an arrow that’ll guide you to the proper screen. However, the game will teach you how it works once you manage to navigate to it. That and there will be a warning sign over the text box underneath your Gunpla’s CPWR. Alright, to change your Pilot’s license all you have to do is click that title box. You’ll then be prompted to the Job License screen.

The license currently equipped by your pilot is most probably All-Rounder, since that’s the default. Anyway, Job Licenses are basically the classes in the game. Each pilot will belong to one of six different licenses, each having their own unique effects and skills or as the game calls it “Limit Burst”. All Pilots though, have access to the All-Rounder license, which is basically the basic class with no bonus. Limit Bursts have a Job Gauge that fills overtime during missions and is activated like EX skills. Job Licenses have a direct effect on your Gunpla’s CPWR.

The different Licenses and their effects are as follows:

The sad truth about 3-star and 4-star base parts

Gundam Breaker Mobile is a gacha game through and through. Meaning there will be parts that are certainly more powerful than others. It’s nice though that we are given the chance to upgrade our 2-star base parts to 5-star with a lot of effort and grinding. Sadly, 3-star and 4-star base parts will still be innately stronger than 2-star parts when maxed out.

This is why even if you have a 5-star or 4-star complete build that came from a 2-star base, you’ll still have lower CPWR than a build that started from 3 or 4-stars. So, the next time you may wonder why you have lower CPWR or Stat parameters than another Gunpla build, despite having maxed-out levels, this may be the reason.

You may also notice, in some cases, that even when you have bloated CPWR your stats may be lower compared to other Gunplas with smaller CPWR. This is because having high CPWR doesn’t always translate to amazing stats. Sadly, we’ll once again go back to the points we made above. That the higher the base star of a part the stronger it is. So, it’s very possible for you to have a 50k CPWR 3-star base maxed out Gunpla that has lower stats than a 4-star base 25K CPWR one. As a final reminder, be more mindful of parameters rather than total CPWR.

Because at the end of the day, combat will be dictated by these stats rather than your overall CPWR. And that’s about it. These are all the aspects that affect your Gunpla’s build and, ultimately, its total CPWR. If you have additional questions, we got any information wrong or missed some points, do hit us up in the comments section below. Happing building everyone!