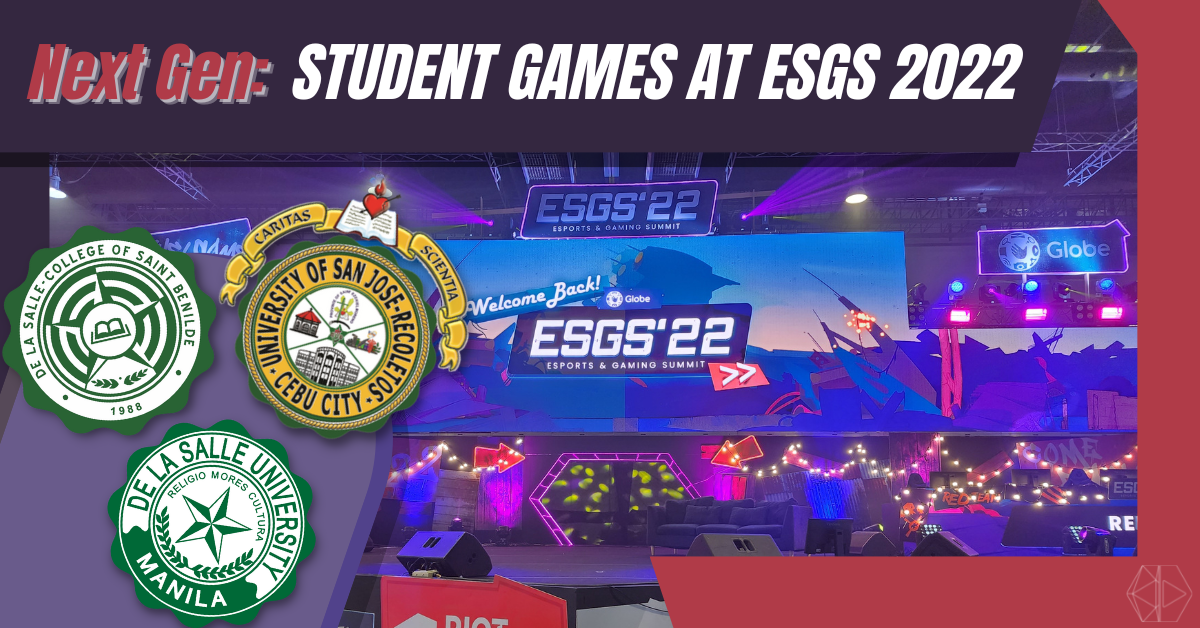 The Future is now, old man!

ESGS often showcases the biggest brands and products in the video game industry. In 2019, Nintendo and MaxSoft showed up with a massive demo booth for fans to try out Pokemon Sword and Shield. This year, Riot Games flaunts a 3-in-one show floor— Valorant and LoL: Wild Rift exhibits, combined with an esports stage.

But If you peel your eyes away from the giant LED screens, the endless stream of cosplayers, and salespeople handing out brochures, you’ll find the Indie section. To many, the games here are dull, with forgettable graphics and unoriginal mechanics. But for me, indie and, in particular, student-made games are quite exciting; there’s nothing more magical than a student’s first foray into the art of game development.

So with all the focus on established brands, how about some love for the next generation of game developers? Here are some of the student games that caught my attention at ESGS 2022.

First up, from DLS-CSB comes Little Routines, a pixel-based life simulation game. Your goal is to prevent Alex, a college student living on her own, from burning out. Alex has five self-care domains: physical, social, mental, fun, and environmental– its game over if one of these goes to zero.

Each level takes place in Alex’s apartment and consists of a week in her Life. To progress, she needs to complete major tasks, such as grocery shopping or paying bills. She also has the option to raise her self-care stats by doing minor tasks like chores or playing video games. Each of these tasks takes time, so take care of everything before the next week starts.

To beat the game, you must get Alex through four weeks of her life. There are even multiple endings, depending on her self-care domain values at the end. So, there’s certainly some replay value.

Overall, it’s a cute simulation game that permits a decent number of winning action combinations. I just wish that there were some element of randomness in the task rewards to spice things up. It’s a good start, though, and I look forward to what the team adds next.

Relics of the Labyrinth – University of San Jose – Recoletos (USJR)

Next, we have Relics of the Labyrinth from USJR. Relics is a platformer with RPG elements, based on Greek Mythology. You play Daedalus’ son as he investigates the mysterious behavior of the Greek Gods, allegedly caused by the demigod Perseus.

Being a Percy Jackson reader during my tweens, I was immediately drawn in by the story’s premise. The game features references to greek culture and design, with monsters like the Minotaur and the use of Greek letters to denote important objectives.

Each level consists of a series of puzzles, with a boss waiting for you at the end. Movement options here are plenty: you can run on walls and fly later in the game. As with most RPGs, you have access to a variety of weapons, skills, and attribute points to aid your journey.

Relics takes the challenging approach of combining a lot of movement mechanics and weapons with platformer puzzles. Unfortunately, I didn’t have time to go through the whole game, so I wasn’t able to test out the flying mechanics. I also foresee a lot of balancing issues with this approach due to the sheer amount of mechanics at play. Nevertheless, the interesting plot and variety of movement options should make for an interesting game.

The last student game from ESGS is Eureka: A Serious Game for the Promotion of Chemistry from DLSU. Eureka is a digital card game, featuring elements and compounds as monster cards. In its current state, you play against computer-controlled monsters, and you lose when your health drops to zero. You start out with eight element cards, a certain amount of health, and catalysis points.

Also, you draw two random cards from your deck at the start of each turn. Each element (or compound) monster has a set attack and health. It dies when its health drops to zero. Some elements also have special effects, such as oxygen, which heals you each turn. Each element’s design is also based on its real-life applications: Nickel looks like a battery and Carbon looks like a plant.

On their own, elements are weak, but you can create more powerful monsters by fusing elements together. The end results are compounds, and the fusion formulas are based on chemical formulas. For example, you can form water (H2O) by fusing two hydrogen cards with one oxygen card. It doesn’t stop there: you can create more complicated compounds like sulfuric acid (H2SO4), Nickel (II) Chloride (NiCl2), and Methane (CH4). You can also guarantee that you draw certain cards on your next turn by using lab instruments. Each instrument comes at the cost of sacrificing two monster cards, but gives you three set cards, instead of your usual random draw of two.

For instance, the “Electrolysis” instrument lets you draw two hydrogens and one oxygen card next turn– perfect for making water. To summon an element or compound, simply place it on a Petri dish– you have nine dishes in total, arranged in three columns– and pay the catalysis cost. Here’s where I encountered the main issue with the demo: the catalysis costs were too low. It felt like I was too free to form as many compounds or elements as I wanted, without having to think about my catalysis points.

During the computer’s turn, it will deal damage to one of your monsters and (at higher levels) heal by a certain amount. It scores a direct hit against your health points if at least two columns of Petri dishes have no monsters.

As a physics major and chemistry enjoyer, Eureka has to be my favorite student-made game at ESGS. While it suffers from balancing issues, it’s a fun, educational game that will get you thinking about chemistry.

All of the student games at ESGS are the thesis projects of college students in Game-dev related programs. With the gaming industry being as cutthroat as it is, these students need our support to thrive and keep video games fresh and interesting. It’s also nice to see students exploring a diverse array of game concepts and genres.

While ESGS 2022, wraped up on October 30, 2022, you can still champion student games by attending showcase events or by buying their games on platforms like steam. Trust me, your support will go a long way in shaping the next generation of gaming.

Check out the rest of our ESGS 2022 coverage here!

All the Juicy Tidbits from the September 2022 State of Play