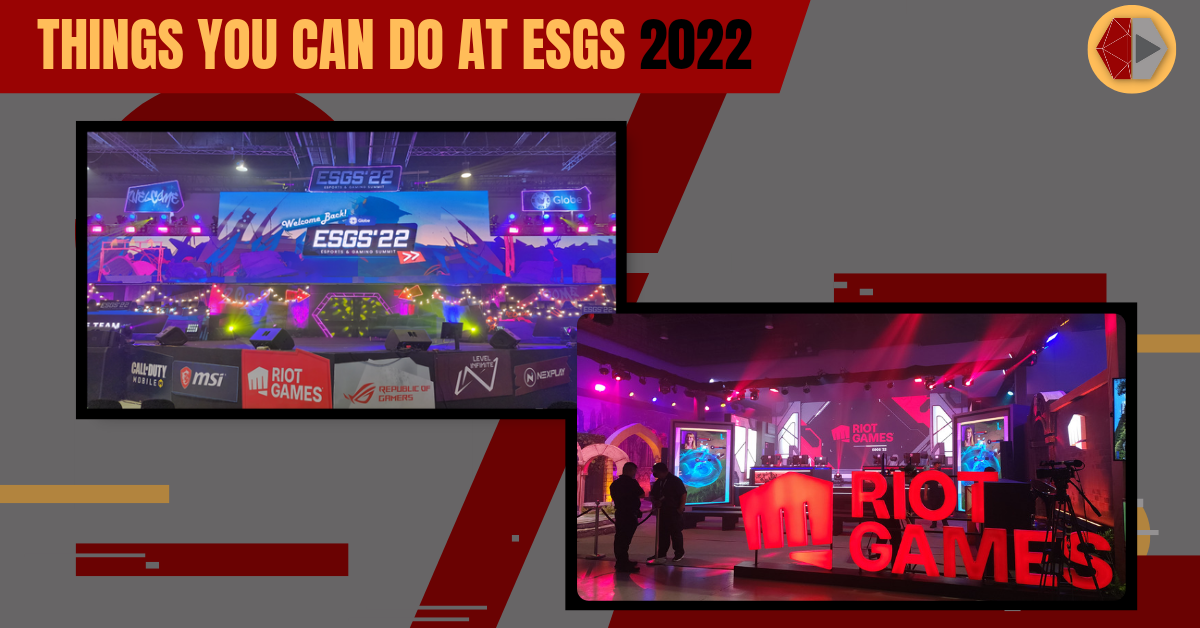 The Electronic Sports & Gaming Summit is finally underway and the come back is real for the largest Philippine gaming convention. The big return marks three days of events, presentations, games, and more. If you plan on attending or don’t know what to do with the ticket you bought then don’t worry we got you! Here are the things you can do at ESGS 2022.

One of the main attractions of ESGS 2022 is its exhibitors. From known gaming brands to indie companies and even gaming institutions. This is the best time to pay them a visit to know more about their products or what they offer to the gaming table. Other than that, all of these exhibitors will have their very own in-house events and giveaways.

Not to mention, event exclusive discount or even sneak peeks on their products. What we love the most here though is visiting those indie developers or institutions as they have lots of surprises to give. So, there are a lot of things to take home here from knowledge to goodies, and even just the chance to get to know more about the people behind the gaming industry.

Arguably the biggest exhibitor of this year’s ESGS 2022 is Riot Games. As such, it would be best to pay them a visit if you’ll ever be attending or maybe even make them the reason to visit if you’re a fan. They have their own mini showfloor with exhibition matches of their Esports titles. Then there are activity areas where you’ll get a reward after completing a set of tasks.

Walk around the 0917 District

Joining Riot as another major exhibitor and partner is Globe with their 0917 disctrict. This area of the showfloor has various booths with different activities you can participate in. Completing these tasks, as always, will reward you with some goodies. There are also mini programs every now and then that includes giveaways and raffles.

As we’ve mentioned earlier exhibitor booths all have their own in-house events even ESGS itself actually. These range from tournaments to mini games, and even a build your own keyboard area. Not to mention tons and tons of giveaways and raffles. This is your best shot at getting a lot of loot to bring home for free or with just a little bit of time and effort.

Play Games, Both Old and New

What is a gaming convention without games right? Well, lucky for us the ESGS showfloor has tons of areas where you can freely test games. Whether you want to just relax or casually challenge your friends. There are some designated fighting arenas where you can test your mettle with others in games such as Tekken and Street Fighter. Exhibitor booths, on the other hand, have gaming setups you can try games on.

There are others though that let you try recently released games or even demos of soon to be released titles. Like the Sega booth where you can test out Sonic Frontiers and play Persona 5 Royal. If you fancy a blast from the past, RGCP has a play area set-up with old school consoles. Then there are others who even give you freebies by testing out their setups and games. Either way, you’ll have no shortage of games to play or test out.

ESGS 2022 is a gamer’s paradise not just because of the events and games you can play but also because of the goods you can buy. So, better console that wallet of yours as it will take a beating for sure. The most obvious items you’ll be spending that cha-ching on are upgrades or additions to your gaming gear. As we’ve mentioned, brands have event exclusive discounts on their products.

We’ve got monitors, laptops, keyboards, mice, headsets, you name it and they’ve got it. More importantly, these are on juicy price cuts. So, if you’ve been eyeing a particular item for a while now then you may get that score here. There are other goodies as well, such as stickers, clothes, action figures, and even old school consoles. There is definitley no shortage of things you can splurge on.

More than the games and the booths, ESGS 2022 also lined-up some official events, presentations, and competitions to tune into. Such as their very own official Esports tournaments, a cosplay tournament, and presentations from various exhibitors. There’s even a concert later today by Mayonnaise courtesy of Acer Predator. We also have panel talks for Esports career related topics. You can check the official schedule of these events over at the ESGS Facebook Page.

Take a break and grab a bite

If you ever find yourself wanting a break from roaming around the venue or maybe just to take a breather then why not pair that with something to eat or drink. The showfloor has its own dedicated eating area. Whether you need just a quick bite or a full meal you have quite a few selections, heck Mcdonalds is even in here to indulge your guilty pleasures.

That’s about the big things you can do while roaming the showfloor of ESGS 2022. If you’re a first time attendee we hope you enjoy the experience and if you’re on the fence whether to go or not, we hope we helped you in deciding.

Now is a great time to build a gaming PC