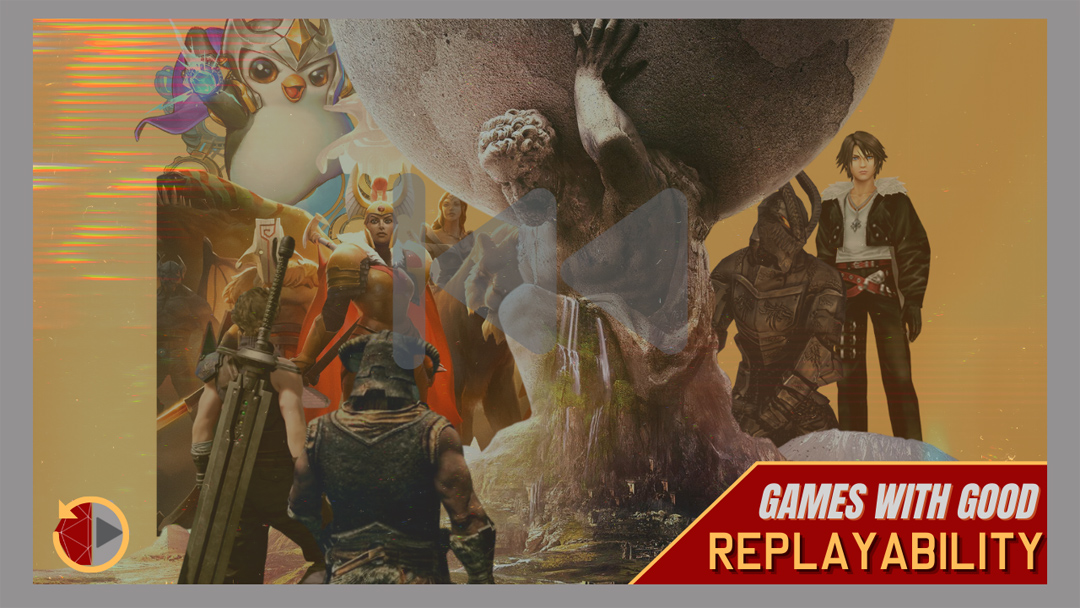 Finishing any game make you feel all sorts of emotions, but only a few are really good for a repeat playthrough. Today, we’ll guide you on games with good replayability that will definitely make you want to play for more. Let’s begin!

This is undeniably a no-brainer choice in the list. Each match allows you to practice and master your chosen heroes, analytical skills, and game sense. Since it was released last 2013, the game never ran out of players.

Up to this day, the game’s community, players, and supporters are continuously enjoying the game, especially its e-sports scene. Apart from its main game mode which is a 5v5 match, Dota 2 also offers custom maps inspired from its parent — Warcraft III: Frozen Throne.

In my experience, with a total of more than 1000 hours of playtime, I still come back to this game from time to time. Overall, it is great for gamers of all ages.

The Elder Scrolls franchise is no stranger to games with high replayability. Given that these games are in the role-playing genre, you’ll know that each title has a vast world to explore. Two of the most popular games in the franchise are Skyrim and Morrowind. Bethesda also made it a point that you can explore however you want and at the same time, do whatever you want.

Apart from the usual adventure, there are also game-breaking bugs and glitches that you’ll discover — accidentally or intentionally. It’s actually more of a “play at your own pace” rather than an RPG with progression. Even though the games do have a story you can follow, most people just hop into it to live their fantasy life.

I had fun playing Skyrim and I’ve taken different routes and choices each time I play it. Up to this day, I always have the urge to replay it and would probably start a new adventure soon.

Music and rhythm always bring good replayability value in games. If you are into this genre, then Osu is your best bet as this brings joy to any music lover all over the world. There are four different game modes that vary on your playing preference — osu!, osu!mania, osu!taiko, and osu!catch.

Personally, I play the first two the most given that they each bring different hand-eye coordination skills to the test. osu! lets you use your mouse or pen tablet while osu!mania is basically o2Jam that requires you to use a keyboard to play.

The community and modders are also active so whenever there are new songs that come out, you can expect that it’ll be in the game anytime soon. Overall, I would prefer to play this with friends as it brings a more competitive feel to the game. Not to mention, it has a worldwide ranking system that is connected to the account that you’re using.

Civilization types of games are always a fun thing to play if you’re into strategy and politics. Civ VI, in particular, brings your strategic thinking to the test. I remember witnessing our EIC, Zelestiv, playing a single match that ran for more than 12-hours non-stop. For me, it was exhausting, but for them, it was very immersive. The good thing about this is that its replayability is great given that there are different types of civilizations and maps to play in. Plus each playthrough will most definitely be different than the last, whether you are playing against AI or with friends.

Try it out and see how addicting it can be when you start playing it alone or with friends.

Do you want an action dungeon crawler game that relies on randomness and comes with awesome voice acting? Well, Hades is the game for you. I really enjoyed playing this despite it being a single-player game.

You take control of Zagreus, son of Hades, as he attempts to escape the realm of his father. Random powerups are up for grabs each time you get into any instances. You also gain permanent abilities and weapons based on which playstyle you use.

The replayability of Hades is great as the game’s design is for you to die and repeat the levels over and over again. It was practically built to be repeated.

Star Ocean: Second Evolution is arguably my favorite single-player RPG ever. This game introduced me to a whole bunch of decision-making dilemmas.

The game has a good replay value because finishing the game will make you curious as to which characters you want to power up and get. Overall, it’s a really fun game with a good storyline and combat system.

You won’t be surprised to see Left 4 Dead 2 in the list if you’ve read my previous article on why this game is a timeless masterpiece. I have mentioned a lot of factors there including an active community and a good selection of mods to choose from.

What makes this a great game to play is that you’ll never be alone in this game — quite literally. Even if you’re playing on your own, you’ll have other AIs playing with you. Finishing a campaign will give you a great sigh of relief while the fear still lingers within you. These things will stick with you no matter how long you stopped playing this game.

In the end, after all these years, you’ll want to play the game again but this time, with more confidence than your previous playthrough.

This goes without saying, the longest-running video game RPG franchise in the world. By Final Fantasy Series, I meant all of the games are included here even the critically acclaimed MMORPG — Final Fantasy XIV.

Replayability-wise, the game already lets you choose the path that you want to take and which ones you would want to power up. Aside from the rich lore of each game, you have the liberty of doing what you want for as long as it takes. (ehem… Want to play cards?). In my experience, I have repeated and finished Final Fantasy 7 and 8 more than 10 times already.

Nevertheless, if you are new to the Role-Playing Game genre, then browsing through the Final Fantasy library will help you get started on your journey.

Much like with its sister game, The Elder Scrolls, every game in this franchise (Apart from Fallout Shelter) lets you explore and do anything that you want in the game. Kill enemies and loot everything? Go ahead! Kill friendly people and loot them too? Sure, why not! This really broadens your horizons and makes you want to play the game over and over.

Of course, you’ll also get to taste some of the iconic glitches and game-breaking bugs found in each game. I recommend that you check them out once you’re done with your normal playthroughs of any of these games.

Now now, I know some of you will be mad for not including the main LoL game, but I prefer DOTA over League in terms of long-term aspects of gaming. However, I can safely say that Teamfight Tactics is the better chess-like game mode over DOTA Underlords.

The variety of character combinations and abilities to try out in this game is fun and exciting. Meanwhile, the dynamics of the item effects and the randomness of each one of them make you want to play it over and over. Not to mention, the amount of theory team crafting you can do as mixing each trait is harder than with other auto chess titles.

If you’re not familiar with chess-like games and would want to try them out for yourselves, this game is the way to go. The Dice gang is currently addicted to Teamfight Tactics. If you want to play with us, hit us up or leave a comment below.

“Ah sh**, here we go again.”. The list wouldn’t be complete if we didn’t include the GTA series here. Our go-to game to just roam around and wreak havoc. This gives us a lot of fun and happiness even for a short while. The most popular titles include Vice City, San Andreas, and GTA V. The latest in the series provides more variety as modded game modes and cosmetics are available here. What’s better is that it has an online multiplayer system and lets users connect with each other. Basically, extending the road rampage antics to a broader scale

The most popular GTA V role-playing server is NoPixel. Famous Twitch and YouTube streamers hang out there so you might want to check it out for fun.