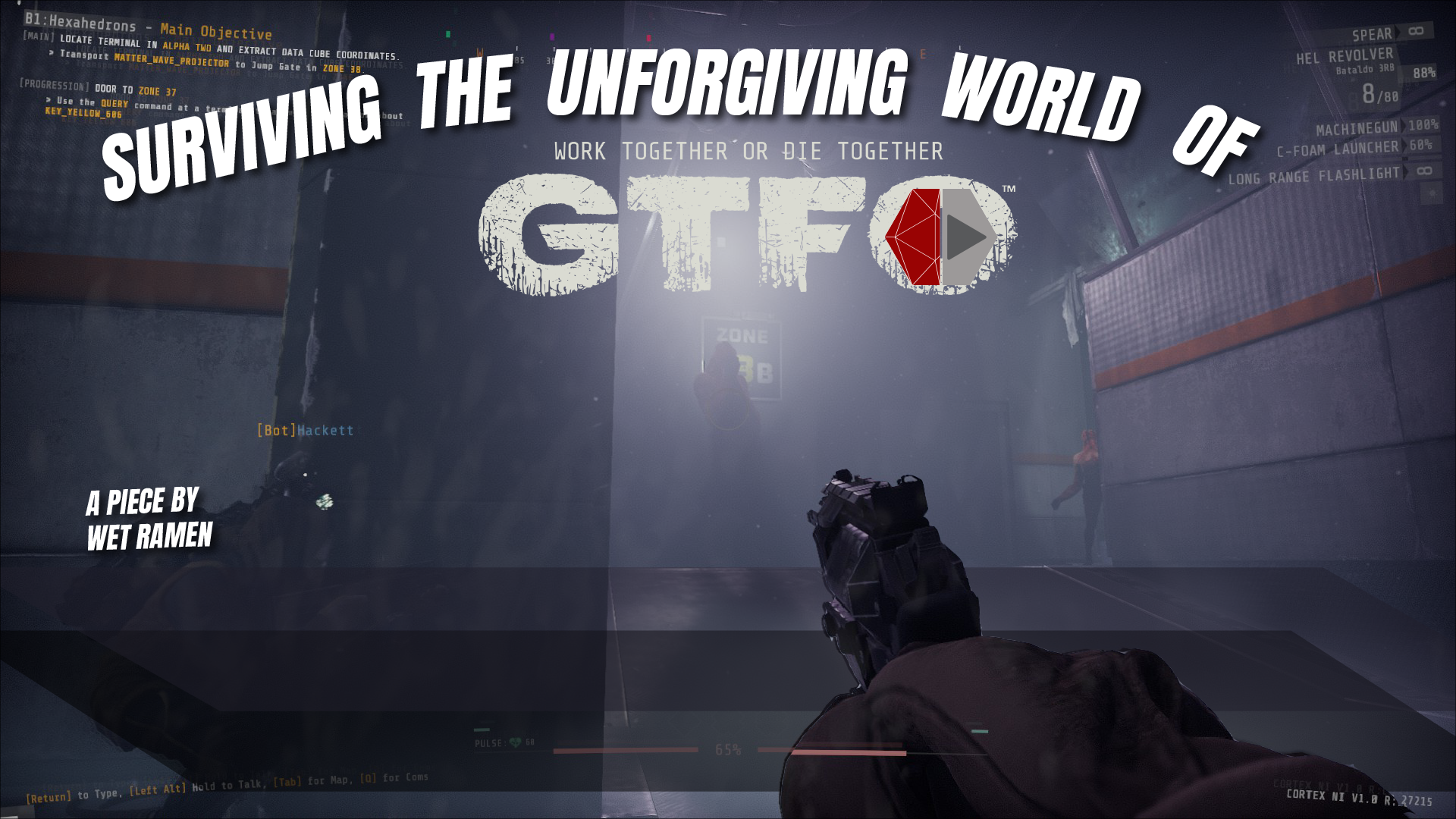 by WetRamen in January 10, 2022January 10, 2022
Feature Guides
Tweet
Contents hide
Know your equipment
Into the unknown (check your maps)
Sneaky beaky or Guns out?
Stealthy
Guns Out and loud
Gotta know your enemies
SLEEPERS
SCOUTS
BIG VARIANTS
Resource management
How do I operate the terminals?
Check points and Extraction

GTFO is a horror survival first-person cooperative game created by the Swedish indie studio 10 Chambers Collective. It was released back in December 9, 2019 in Steam as an early access game. 2 years and 6 rundowns later, it finally went onto the next phase.

The entire premise of the game is for you to run certain objective-based explorations called Rundowns. These rundowns could last from 30 minutes up to 2 hours, depending on your playstyle and how long the rundown actually is. So make sure that you have plenty of time before you decide to play.

In GTFO you are presented with different equipment at the lobby of every game. There are no limitations to the weapon choices that you can take. You can choose among pistols, SMGs, rifles, shotguns, and revolvers. You also have the option to equip rifles on both hands or revolvers, or any mix of any weapon types.

The most important part of the equipment line are the utilities and melee weapons. Before release, the game only had different types of blunt weapons with the same charge and damage output. However, after the new update, they released multiple melee variants such as spear, knife, club, and hammer.

The utilities, on the other hand, are what could make or break the game for you and your team. You can choose among different kinds to specialize in either defense or offense. The most useful tool that you should always carry is a Bio tracker as it can check and ping enemies. As for what else to bring, it is better to experiment with your team.

Into the unknown (check your maps)

Another survival tip is to know how to use and what to use the map for. It looks complicated, but it’s actually easy to learn. Your entire team can drag and draw on the map, and it is visible to all team members. This is vital as you need to check the map from time to time when you plan your route or to check where you’ve been.

The map is as basic as it gets, you just have to figure out which doors lead to where. Always remember that you don’t always need to open all doors as long as you can find the objective early. You can also check the map for any cases or lockers that you have missed. Utilizing the map is essential as it can provide you with the most optimized route for your game.

Sneaky beaky or Guns out?

This is the part where you have to choose your playstyle, although there is no “true” way to play GTFO. Your play style depends on you and your team’s preference. These are merely suggestions on how you could play the game.

Since the resources are scarce in the game, you pretty much have to rely on being sneaky. In stealth, you have to coordinate with your team on when to move and kill. This is essential to conserve ammo and reduce the fights that you get into.

Going Stealthy guarantees that your team is most likely ready with resources for when mandatory fights occur. Another benefit is that you learn more about the game as you get to enjoy it at a slower pace. The only downside here is that a playthrough could last longer (an hour or two at most) as you really need to take everything slowly.

Guns Out and loud

Perhaps stealth isn’t your thing so you just choose to run and stab. This is a bit dangerous since you can trigger random spawns which should only happen during alarms. The only upside here is that you can brag to your friends that you beat a rundown while gunning it. Although, there are certain levels in which run and gun is the only way to go.

The only upside to going guns out is the fact that you can fast run the entire game. However, it is full of downsides as you will spawn multiple enemies per room. Also, expect your resources and ammo to run out before the game ends. But again, bragging rights.

We won’t be going through every single one, but we would list the most common and note-worthy enemies. That and the fact that this new rundown may have new foes that we haven’t encountered yet. Knowing what kind of enemies you’re up against will help you plan on what route or playstyle to take.

The most common enemies you will encounter. There are striker and shooter variants of them. They are easy to kill, a full charge hit to the head could kill them. They tend to stack up though, so having a squad to help you will make it easy.

Scouts are giants with tentacles protruding out of their heads. If you or any teammate touches its tentacles, it will retract and trigger an alarm that will attract enemies. It can also attract sleepers and all other variants in your vicinity, and nearby rooms. One tip here is to have someone foam it then melee or just kill it with a sniper.

Basically, larger variants of sleepers and shooters. These are tricky to kill as it requires an entire coordinated team to execute them. Failing to kill them in time means that someone will take huge damage from any variant. If this happens, you should always pull out your best gun and shoot.

Keep in mind that you start every run with less than 100% of your resources. You will find ammo and tool packs to refill your weapon and equipment. While tools such as glowsticks and fog resellers will help in making a room much visible. Managing your resources could mean life and death for you and your team.

You can always use a terminal to check how many items exist in your current zone. Another trick is to check your mini-map for unopened toolbox and lockers. Sadly, enemies do not drop any loot or resources, so don’t go wasting your precious ammo. Always make sure to loot each and every toolbox or locker you can find.

How do I operate the terminals?

Terminals are the trickiest mechanisms to operate in the game. Terminals offer data of items available in their respective zones. You can use multiple commands which help you in your quest. For the sake of this guide, you will only be needing “LIST”, “QUERY”, and “PING”. These three will help you locate and check for loots in various zones.

Another use of this is for in-game progression. Some levels require you to operate a terminal to disable alarms or activate doors. The commands for these are usually displayed on the objective terminal, so no need to worry. Just be mindful that some of these commands need to be inputted within a certain amount of time.

During the early days of GTFO, (I played it since it first came out) there were no checkpoints. You could spend an hour or two and get wiped making it all go down the drain. However, in the latest update of the game, there are now checkpoints that really do make the game easier. The wonderful thing about this is that everything you ever encountered is where they are after respawning. This means that there’s no more worrying about objectives and monsters randomly popping up.

To end the guide and the game, we have the extraction zone. This is where you get to safety where the goal is to survive. Even if there is only 1 survivor inside the zone, the game will end with everyone finishing it. This is why resources are important, as each extraction zone gets harder and harder. Hopefully, this short guide is enough for you to survive and beat the game.

If you want to purchase or know more about GTFO, please visit these links below

Contents hide
Know your equipment
Into the unknown (check your maps)
Sneaky beaky or Guns out?
Stealthy
Guns Out and loud
Gotta know your enemies
SLEEPERS
SCOUTS
BIG VARIANTS
Resource management
How do I operate the terminals?
Check points and Extraction