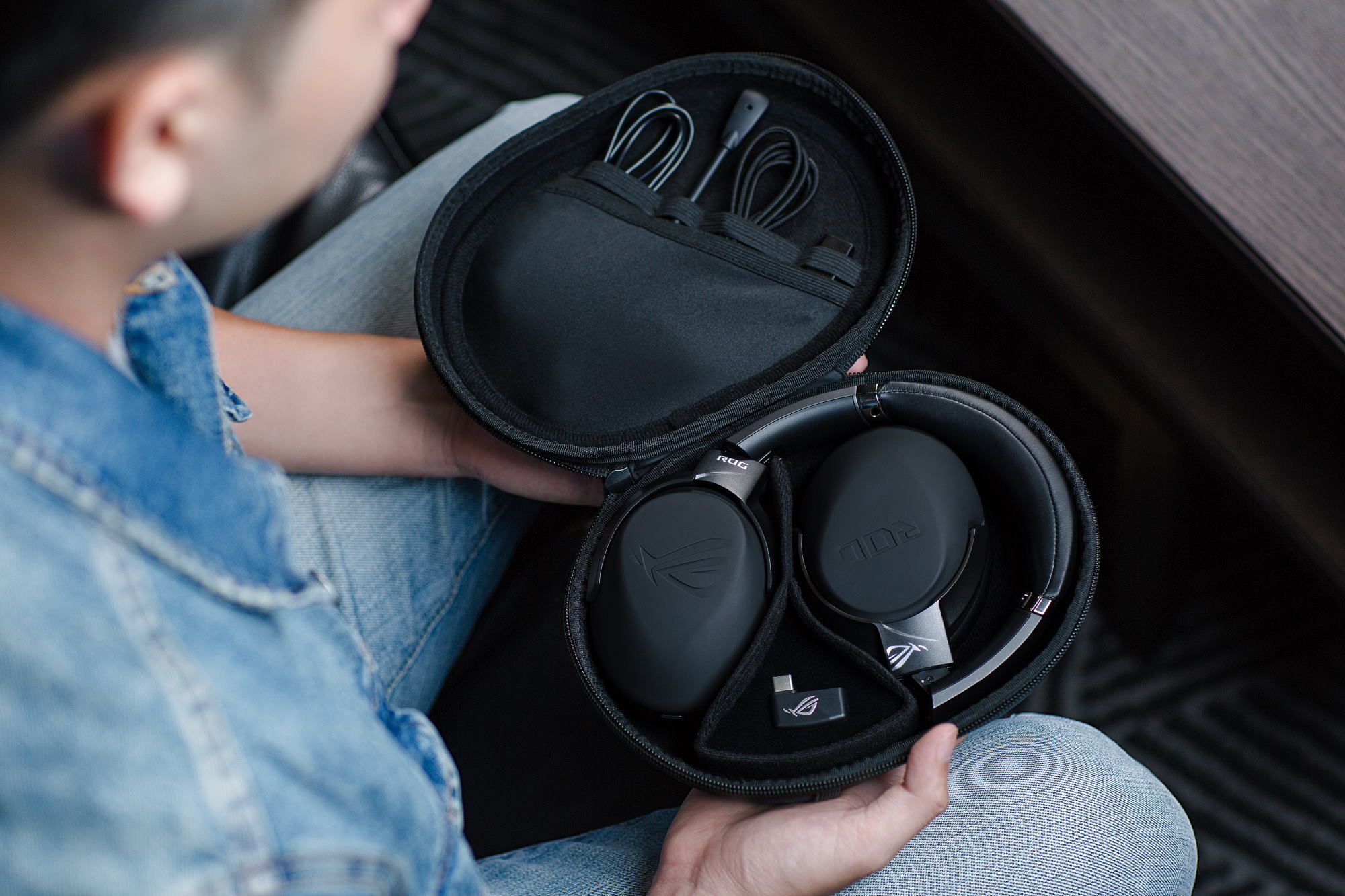 Accompanying ROG’s line of monitors, laptops, desktops, and components are their peripheral line. This CES 2020 there’s no shortage of successors and newly announced members joining those line-ups. So, let’s take a peek at ROG’s CES 2020 Peripheral line-up.

First up, let’s take a look at the new keyboard joining the ranks of ROG’s Strix line.

ROG’s Strix Scope line is getting a little bit crowded now with all these variants they keep on releasing. Even so, it seems they’re not about to stop as they yet again introduced a new member to the family, the Strix Scope TKL Deluxe. Just as the name suggests, this time around we’re getting the tenkeyless treatment. The TKL Deluxe will come with a variety of Cherry MX switch options — Red, Blue, Brown, and Silver. Then, of course, we’re not about to lose RGB customizability, which extends to the logo, the glow effects, and even each lock indicator. That’s not all, ROG also included a light bar underneath the front edge, packed with 26 RGB LEDs. Just in case the key lights aren’t enough.

You’re not left with just light customizations though, as macros and profile editing are also possible. The on-board memory of the Scope TKL Deluxe allows for up to one default and five custom profiles, that can easily be toggled via the Fn key or the Armoury II utility. Losing those ten keys means we have a smaller form factor that’s easier to store. To further aid with ease of transport, the Scope TKL Deluxe has a removable braided USB Type-C Cable. Lastly, for additional comfort with long hours of gaming, ROG included a magnetic padded wrist rest that easily snaps to the keyboard. Pricing and availability are yet to be announced.

Next up, is the latest entry to ROG’s ever-expanding headset portfolio.

ROG’s Strix line of headsets is still quite young when you compare it to other competitors out there. Even so, that didn’t stop the brand from releasing quality headphones in the past years. This time, they’re going to dabble more into the wireless market with the ROG Strix Go 2.4. The headset was built with portability in mind as it weighs at just 290g and is bundled with its very own travel pouch. To up the ante when it comes to compatibility the Strix Go 2.4 comes with a USB-C transceiver that’s compatible with any Type-C device (Phones, PCs, Laptops, and even the Nintendo Switch). It doesn’t stop there as we’re also getting USB 2.0 and 3.5mm adapters so the headset can be plugged in almost all devices.

Sadly, ROG decided to forego Bluetooth support, so you’ll be forced to use the dongle and its adapters. Handling the audio-side is a pair of 40mm ASUS Essence drivers. Communication-wise, we’re getting a detachable bi-directional boom mic aided by AI noise canceling and an additional one hidden in one of the ear cups. The battery is rated at up to 25 hours of continuous use, we have support for fast charging using either USB-C or USB 3.0. The volume controls, as well as the three-function media buttons, are found at the left ear cup. Pricing and availability for the Strix Go 2.4 are yet to be announced.

Lastly, we’ll look at the new mouse offerings of ROG, the peripheral with the most announcements this CES 2020.

Perhaps one of the most unique gaming mice we’ve seen thus far is the ROG Chakram. Sporting a rather unmissable joystick, the Chakram aims to provide gamers with a little more flexibility in certain genres. The mouse offers two modes — Analog and Digital. Each of these modes changes the joystick’s functions. Analog is more beneficial for games that require a little more finesse (racing, flight sims, etc).

Meanwhile, digital mode turns the stick into a four-way controller allowing games such as FPS and RTS quicker access to certain commands. You do have the option of removing the joystick and replace it with a socket cover or change its size. Another thing you can’t miss is the translucent matte finish plastic chassis of the mouse, which reveals tidbits of its insides.

The internals are easily accessed as the main buttons and palm rest are magnetically held. That palm rest area houses the included USB dongle. ROG is boasting DIY customization as the Chakram’s Omron switches can be swapped with other compatible clickers. The mouse supports D2F and D2FC-series models. As for aesthetics, the ROG logo badge at the rear of the mouse can be swapped for a blank customizable one.

The mouse’s DPI range is also quite expansive, offering a range of 100 up to 16,000, which can be increased in increments of 100. As for battery life, the Chakram is rated for 48 hours with the RGB LEDs active or 79 if without. You’ll get even more juice when on Bluetooth with a rated 53 hours of life with LEDs and 100 without. There’s also the option of using it wired as it charges. Pricing and availability are yet to be announced.

The ROG Strix Impact II introduced last year gets a cordless variant in the form of the ROG Strix Impact II Wireless. This time around we’re getting almost triple the max DPI at 16,000 as the wired one capped at 6,200. Easy swapping of the sensitivity is available through an on-the-fly dedicated button. Running the wireless show is a 2.4GHz connection though there is an option for wired operation while charging.

Similar to the Chakram, the Impact II Wireless also supports Omron D2F and D2FC series replacements, should you wish to customize. The mouse is also compatible with ROG’s Armoury II software for further fine-tuning and control options. Pricing and availability are yet to be announced.

ROG’s ambidextrous mouse, the Pugio, released back in 2017 finally gets an upgrade. Say hello to the ROG Pugio II, the wireless semi-customizable successor of the Pugio. ROG’s ambidextrous offering of 2017 had a rather aggressive design, with intricate cuts and lines on the palm rest. All of that changed with the Pugio II as we now have a more rounded aesthetic. The mouse did retain the four side buttons, all of which can be removed and tucked away if they’re not needed.

We’re also offered wired and wireless operations (Bluetooth or via a 2.4GHz RF dongle). Battery life is rated at about 40 hours with lights and 100 without, then charging takes about two. Similar to the Impact II Wireless, the Pugio II also has its own blank customizable palm rest badge. Of course, the default ROG logo one is still there should you wish to use it. As with all the previously discussed mice, the Pugio II also has Armoury II support for further fine-tuning.

DPI maxes out at 16,000 and can be adjusted further using the aforementioned software or via the DPI-on-the-scroll feature. To use the latter, press and hold the DPI button and scroll the mouse wheel, the RGB lighting will indicate the DPI level. Alternatively, you can just click on the DPI button to cycle through 4 presets. The Pugio II is also equipped with Omron Switches, out of the box you have the D2FC-F-K and D2F-01Fs but it supports any D2F- or D2FC-series switches. Pricing and availability are yet to be announced.

And that’s about it, these are the current peripherals ROG has announced this CES 2020. Most of these will hit the market probably Q1 to Q2 this year. Be sure to check out the rest of our CES 2020 coverage here.

Cuphead for the Nintendo Switch announced