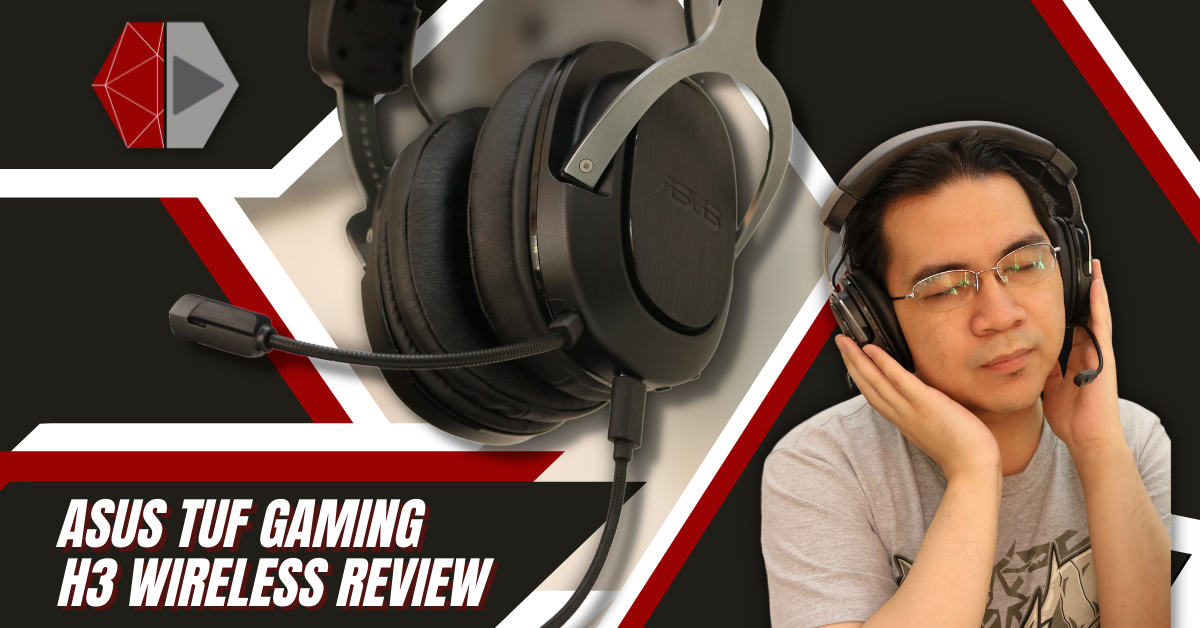 Wanna know if going wireless will break the bank? Time to find out in our ASUS TUF Gaming H3 Wireless Review!

ASUS is slowly but surely growing their peripheral ecosystem from their ROG line down to the budget-oriented TUF Gaming series. To keep up with the trend the brand is expanding to the wireless territory. We saw it in ROG with this year’s Gladius III Wireless.

Of course, they won’t leave their budget audience hanging so TUF Gaming also got some love. One of those products is a wireless variant of the highly regarded H3 Headset. So, if we remove all the wires on this one, is it still worth the bumped asking price? Let’s find out in our ASUS TUF Gaming H3 Wireless Review.

Discreet Blackness All throughout

The ASUS TUF Gaming H3 Wireless retains the subtle and discreet design of its wired counterpart. A simple matte brushed metal for the ear cups plus the TUF Gaming name and logos on the headband. There isn’t even a hint of lighting on this one. We got no RGB, not even a basic red or blue glow. The wired H3 did have a few color options for the metal on its headband.

However, we got none of that on the H3 Wireless. Instead, we’re left with just the minimalistic Gun Metal, the simplest of all those choices. It even took discreetness a step further by replacing the TUF Gaming image on the ear cups with just the plain ASUS logo. As far as design goes, we got zero aggressiveness and bling just a clean, simple, and professional look.

Surprisingly, the TUF Gaming H3 Wireless is a comfy and lightweight headset. Despite the additional weight of a battery, you can go on long gaming or work sessions without feeling any fatigue. It’s also easy to lug around as it won’t drag you down. However, the ear cups don’t fold inward, so you may have problems squeezing the H3 into your bag. The memory foam ear cushions though are a joy and snug your ears perfectly. So when it comes to comfort, the H3 Wireless doesn’t disappoint.

Removing all the cords means dropping space for a button dongle. ASUS’ solution to that is cramming all the buttons and ports you need on the left ear cup. We’ve got the power and mic mute button along with the volume wheel and USB-C port. All of these buttons, despite residing on just one side, are easy to reach and access. Plus it removes the need for you to memorize which button is on which cup.

An adequate Microphone with a catch

The mic on the H3 Wireless won’t blow you away but it’s not too shabby either. You may not be able to use it for music or record productions but it’s more than enough for casual streams and voice chats. Plus you have virtual noise cancellation and adjustments courtesy of ASUS’ Armoury Crate. However, do lessen breathing into it as it’s sensitive to those, as well as whistling.

Now while sound quality is not a problem, the mic itself might be. That’s because it’s not detachable and you don’t have an included windscreen. The screen is not a deal-breaker as you can remedy that with a 3rd part purchase, but not being able to detach it might. Despite being flexible enough to be bent in different angles it will get in the way at times.

Underneath those ear cups is the star of the show, ASUS’ very own 50mm neodymium Essence drivers. These are the same ones found on the wired H3, which performs admirably. It won’t revolutionize your gaming experience but it will surely aid in catching noises such as gunshots and footsteps. You’ll more than enjoy OSTs, combat music, and the sound of virtual mother nature of games such as RPGs, simulators, and others that don’t require pinpoint audio. Listening to music is also well above average, thanks to good mids, highs, and lows.

It won’t wow an audiophile but for the average gamer, the 50mm ASUS Essence drivers are more than enough for gaming and the occasional sound trip. Oh, by the way, this headset can go really loud and we mean really loud. At its peak, audio will definitely leak out of the cups and maybe too much to some. You won’t lose any clarity and there aren’t any cracks but do proceed with caution when you adjust the volume. The levels are also independent from your system, meaning you can only adjust it through the wheel on the left cup.

You’re not left with just the default settings when it comes to adjustments, like with the microphone the sound drivers have access to Armoury Crate. The software provides a ton of audio tweaks, from preset profiles to equalizers and even virtual 7.1 surround sound. You also have a channel mixer and bass boost, compressor, and voice clarity sliders. So, if you wish to further tweak your audio experience you do have a variety of options.

Not completely wireless but that’s okay

While the headset is called H3 “Wireless” you don’t have the complete cordless package. That’s because our only connection option is through a USB-C 2.4GHz wireless dongle. So, you don’t have any Bluetooth connectivity option here. While the 2.4GHz wireless is definitely better in terms of ease of connection and low latency, you do lose a little bit of wireless freedom. By the way, don’t worry about the dongle using a USB-C connection, ASUS did include a Type-C to USB-A converter in the package. However, it will leave you with a rather long and bulky setup.

Thanks to that converter though, and the native USB-C connection, the headset is able to support connections to gaming consoles. These include the Nintendo Switch, PlayStation 4, and PlayStation 5. It will to some degree also support mobile devices but your mileage may vary. Plus the shape of the dongle isn’t really suited for phones. As for coverage, ASUS certifies a 25m wireless range before you experience any hiccups. That will hold true unless you have walls between the dongle and the headset. In which case, you might experience drops in connection.

Going wireless means needing to plug in every once in a while to juice up the battery that powers your device. ASUS claims a battery life of about 15 hours of continuous usage and a maximum of about 8 days of casual use. The 15-hour rating sounds about right as we had a day and a half to two days charging cycle. This was on an average of 4-8 hours of non-stop work or gaming. However, the longest we got without the need of charging with minimal use was only about 4 days. So that 8-day rating may be for just an hour a day of usage. Overall though, we’re pretty happy with the battery life of the H3 Wireless.

The TUF Gaming H3 Wireless certainly has what made its wired counterpart great. You have outstanding comfort and weight, commendable audio quality, easy-to-access buttons, and a subtle yet professional-looking design. On top of that, the software adjustments are wide and varied, further improving an already amazing experience. Now, it may be great but is it worth the price? For Php 3,490 it most certainly is, the headset is probably one of the more affordable wireless options out there.

What’s even more surprising is that despite the relatively low price tag, the H3 Wireless didn’t seem to cut that many corners. It performs almost as well or even better than its more expensive competition. Now, if you’re not looking to go wireless then you may save a few bucks grabbing the wired version instead. However, if you are in the mood to transition into wireless, then this one is should be on the top of your list. That about concludes our ASUS TUF Gaming H3 Wireless Review, will you grab one? Let us know in the comments down below!

ROG Claymore II Review: As versatile as ever