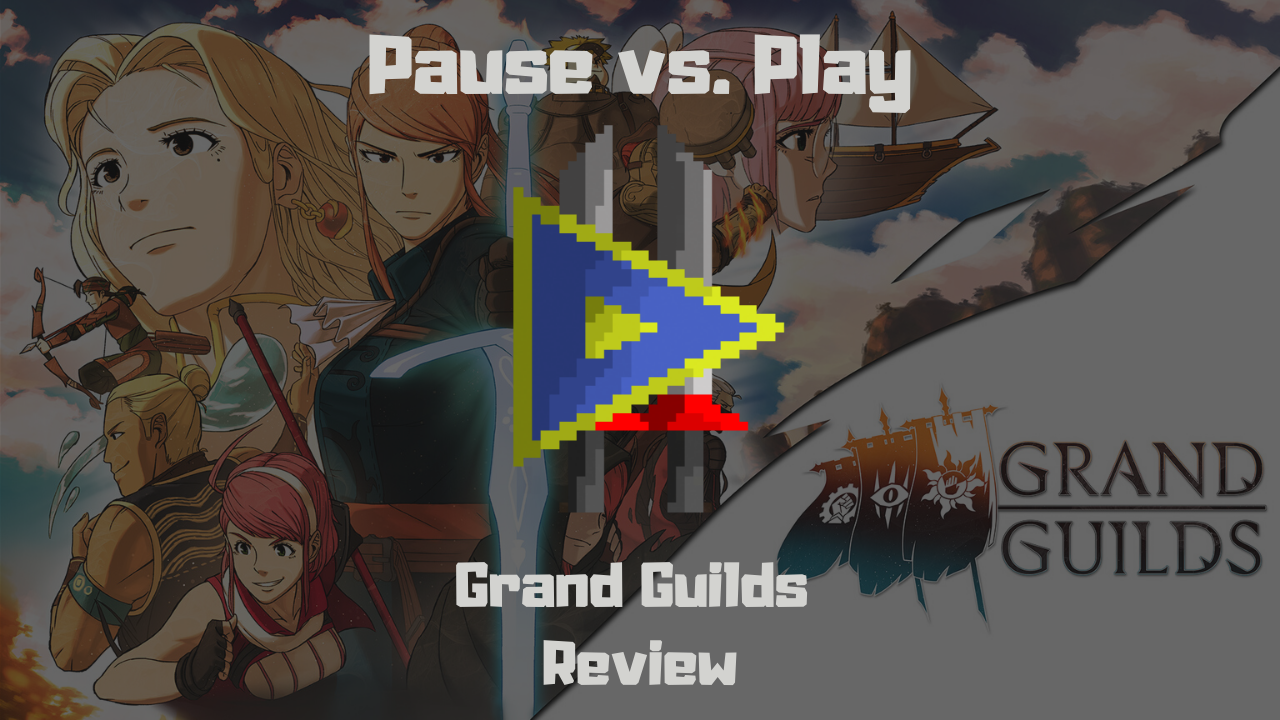 What does Grand Guilds offer in the already populated tactics genre?

Finally, after a year and a half in the cooking pot, Drix Studios and Keybol Games‘ turn-based tactics RPG is ready for the world. A purely Filipino made and developed game, Grand Guilds aims to capture the hearts of the genre’s fans. Can it though? Let’s find out in our Grand Guilds review!

Pause vs. Play: Would you even bother playing Grand Guilds?

Before we head on to talk about specifics, let’s take a step back and check if Grand Guilds even piques your interest. This is our “tl;dr” portion of the review. Although, if you want to better understand these factors then please read on!

What are the features and draw of Grand Guilds that may want to make you play it?

On the flip side, what are the factors that may turn you away from Grand Guilds?

Right then, on with the review proper!

Grand Guilds features 3D models and animations. The closest game we can compare it to in terms of graphics is Adventure Quest 3D. Although, it does have far better visuals than AQ3D, they just have a similar vibe. Those are for the sprites, cutscenes, and combat maps. As for the artwork of the characters, they’re actually pretty good. Their drawings in conversations have a certain appeal and they even have changing facial expressions, which adds quite the flare in certain exchanges.

There were a lot of work put into the combat maps too. From bystanders to burning buildings to oozing swamps, and even characters clashing. Not to mention, dead enemies often die in quirky and laughable positions. Sometimes they even fly off the map too, depending on how grave you defeat them. Overall, the graphics may not be the best we’ve seen on the market but it has its merits.

Now if there was something we wished Grand Guilds offered more is its audio. There are partial voice-overs, both in combat and in cutscenes, but that’s not where the problems lie. The problem is with dead air cutscenes, which you’ll encounter every now and then. These scenes have no sounds at all, not even background music or basic sound effects such as footsteps, air breeze, and the like.

This leaves you wanting more in some scenes, where you definitely could feel the need for audio cues. Some conversations too are left feeling dull because of only partial voice-overs. There are witty combat lines though, when characters use their skills or when they kill an opponent, so at least fights are lively.

Grand Guilds’ story takes place in a familiar fantasy landscape with swords and magic. You’ll feel confused at first at what’s happening or why it’s happening and it takes a while to really pick up. Although, as you progress deeper you’ll feel that storybook pull, thanks to its twists and turns and witty characters. You’ll definitely get that feeling of “what the hell is going to happen next, I wanna know!”, something TV series and books are well-known for.

There are times though when some scenes feel dragging due to the constant exchanges of some characters that take a tad too long. Oh, just a fair bit of warning, there are small hints of profanity here and there. While it made me burst in laughter more than a few times, it may require some parental guidance for younger players. One thing’s for sure, Grand Guilds’ story is definitely well written and worth the experience.

Right, as we mentioned earlier Grand Guilds is a turn-based tactics RPG. Although, it veers away from the usual formula we see with the genre. That’s because it employs a different kind of combat system, which is actually quite simplified. If you’re a hardcore fan of tactics though, the combat might leave you wanting more. Since most of the conventional features we’re accustomed to aren’t present here.

Right, we mentioned that the combat system of Grand Guilds is rather simplified. Even though that’s the case it still has a lot to offer in terms of depth. For starters, we have a card-based system in place, something not entirely new to the genre but somewhat rare. So, instead of shuffling through a menu of skills and actions, units make use of cards. Since we have cards, that means we also have decks or more specifically, deckbuilding.

A character’s deck will have a maximum of 15 cards. In the beginning, you’ll only have access to a handful of default cards for your characters. As you progress to the story you’ll unlock more. So, no, obviously you can’t immediately grab a character’s most powerful card. They’re also not free and must be purchased. Thankfully though, you can plan in advance as all of a character’s potential cards are there for you to view.

Another restriction is that you can only have a maximum number of a particular card in a deck. This ranges from just a single copy to as much as four copies. Apart from the monetary costs, a card will also have an accompanying AP (action point) cost. We’ll get more into what that is in our combat section. Lastly, if you find yourself lacking the Trils, the game’s currency, to buy cards, you have the option to take on side quests. These are open for you to grind if you wish to unlock more options for your units. You can create multiple specific builds using a character’s card pool. Such as either making Eliza a defense-focused or offense-focused unit. So deckbuilding isn’t just a straightforward affair.

Apart from their decks, characters are also aided by passive skills. Like decks, passives are customizable and have costs. Basically, characters are given one passive slot every 5 levels. Passives provide raw stat bonuses and unique bonuses depending on the character. This adds another layer of customization for your heroes.

Okay, let’s talk combat and how does that card-based system really work. First off, your party will comprise of 3 members of your choice or depending on the story requirements. Each member will be given two cards at random from their decks at the start of quests. You’ll have some sort of control over these cards as you can “mulligan” or redraw up to three from among the six. Something common in card games, including physical ones. After which, each turn your character draws an additional card. You are also given the option to redraw cards midfight. How many you can redraw depends on your character’s skills and passives, the default is just one per turn.

During fights, characters have 5 Action Points per turn to consume for their cards. Remember how we mentioned cards have AP costs? That’s where this system comes into play. As long as a character has AP, they can continue using cards, so there’s no real card usage limit in combat. That limit will come when a character uses up their entire deck. So, there will be instances when characters still have AP left but no cards to use. Worry not, they won’t be cardless as the deck will be reshuffled. Plus, each character has a basic attack they can use, meaning you always have an option to deal damage.

The reason why we treat Grand Guilds combat system as simple is that it doesn’t have a weakness or strength system. So, there are no weapon triangles or elemental weaknesses here. Replacing those is an Armor and Resistance feature. Basically, a character can buff themself with Armor or Resistance to repel either physical or magical attacks. Naturally, there will be attacks that can pierce through armor or resistance. Then we still have status ailments such as poison, bleed, burn, and whatnot.

Plus buffs to strength and intelligence to increase physical and magical damage. So, there are still some options for you out there. There aren’t any items here either, so say goodbye to those potion saving moments. You’ll notice though, as you get accustomed to the card system, that there are character’s who complement each other. Such as characters aiding those requiring specific debuffs to take make full use of their most powerful cards. However, that’s about it for the complexity of the combat system.

There is one thing hardcore fans of the genre might enjoy — the game’s difficulty scaling. Don’t get us wrong, Grand Guilds may have a very fun and quirky cast but it can be quite challenging. There will be fights where your tank gets shredded like paper or instances when you don’t even have a beefy character to use. We only played on Guildmate (Normal) difficulty, partly because we wanted to finish the game faster for the review, but we already encountered hard-hitting stages. So, those looking for a challenge will not be disappointed here, especially when you play at Master difficulty.

Another fan favorite tactics feature missing in Grand Guilds is a class system. Characters actually don’t really even have classes to begin with. What they do have are roles, though even those are not exactly defined. You’ll just notice that character cards are leaning towards a specific purpose. For example, Eliza’s cards are geared more towards tanking and Rasmus’ are for healing.

Like any other game, Grand Guilds ain’t perfect. We noticed a few bugs here and there during our playthrough. Most are not game-breaking though and are actually quite hilarious. Such as that time Rei kept walking or running even after here normal movement or teleport skills. One annoying bug we encountered was when our opponents became permanently invisible when we restarted a quest. Not because of some skill, we still see their HP bars but their sprites are missing. This was only with one quest, so it may be isolated.

There is one game-breaking bug we encountered though, when we used pushing skills. There are times when enemies fly in a different direction and proceed to be untargetable or get stuck at an unreachable portion of the map. After which, we were forced to restart the quest and not use our push cards for that encounter to avoid having to repeat the quest over and over. So far, these were the only bugs we encountered, apart from small animation quirks here and there.

Grand Guilds is a beautiful indie game despite its simple systems and visuals. However, it’s not without quirks. Particularly in the audio department as some scenes have dead-air and the partial voiceovers are sometimes not enough. It also doesn’t feature much of the intricate mechanics’ tactics RPGs usually offer. Yet its card combat still has enough depth and customization.

What makes the game truly shine though, is its story. We truly enjoyed the twists, turns, surprises, and comedy of Eliza and her crew’s journey. There are enough “ooh”, “aaah”, and “wtf” moments that’ll keep you at the edge of your seats. If you won’t be playing Grand Guilds for its visuals, audio, and combat at least play it for its story. It is truly a storybook experience.

Grand Guilds is available on the Nintendo Switch and PC. It’s currently 10% off on Steam until April 3rd. Links below: