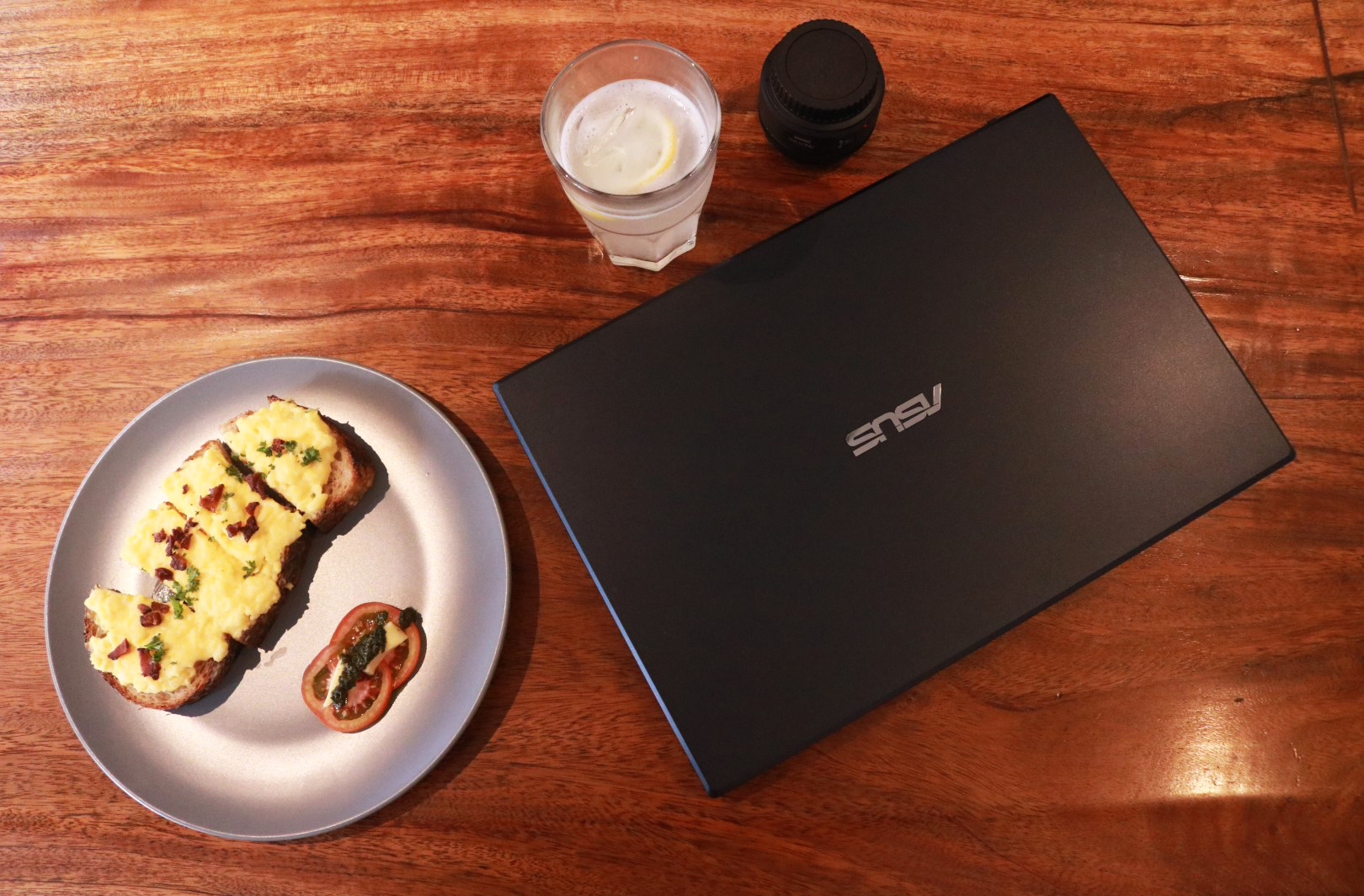 Late last year, ASUS introduced a contender in the budget gaming laptop scene — the “Gaming” X571 or K571/N571 depending on your region. It took on the likes of Lenovo’s L340 and Dell’s G3, to name a few, as a bang-for-your-buck gaming option. Is it truly a worthy contender or perhaps even the best option at its price point? Let’s find out in our ASUS X571 Review.

Despite being heralded as a budget option, the X571 is not without its own sprinkle of elegance. There are those uniquely designed exhaust vents as well as the dark blue hue color scheme that offers a bit of sophistication. We are thankful that the entire laptop shied away from the traditional red and black gaming theme. We also have the ErgoLift hinge mechanism added into the mix. If you’re wondering what that is, it’s basically a feature similar to the Zephy line’s Active Aerodynamic System (AAS). However, unlike in the Zephy’s where a portion of the chassis opens up, ErgoLift just, well, lifts the entire upper portion of the laptop for a bit more breathing room.

Although to take advantage of this, the display must be pushed all the way back. Meaning, you’ll most probably be operating at a weird angle. The chassis itself is smooth, glossy, and feels premium to the touch despite being entirely plastic. However, one caveat is that it’s a smudge and fingerprint magnet up to the point where a dry microfiber just won’t cut it. Build quality-wise, the chassis only has little display and keyboard flex. It’s also surprisingly light at just 1.8kg and thinner than most of its competition at 21.9mm in height.

High refresh rate displays on gaming laptops are now the norm. Thankfully, the X571 has a variant with a 120Hz option. Sadly, the Philippine market was left out in this regard as we’re only getting the 60Hz panel variant. Either way, it’s not too shabby at Full HD resolution in an IPS panel, so viewing angles and color reproduction are quite good. Productivity and content creation aren’t too much of a stress on the device.

Great audio isn’t something you necessarily associate that much with laptops, especially budget ones. Yet, audio is one of the strong suits of the X571. Rightly so as ASUS partnered with Harman Kardon in the development of the laptop’s speakers. Mids and Highs are clear and good while lows are slightly present. The quality is astounding as we enjoyed all of our music and video consumption. If there’s one thing it’s quite lacking in its intensity, it can still go quite loud though but not as much as the previous laptops we’ve tested.

As we’ve mentioned earlier, the X571 takes on a different route from the red and black of gaming. This translates to the white keyboard lighting along with the white outlined keys. What we have here is a traditional chiclet keyboard with short key travel and good tactility. Our typing experience was rather enjoyable and typing was quick and easy. There’s another feature we loved about the X571’s keyboard and those are its function shortcuts. Particularly the inclusion of a quick screenshot key and a camera toggle. The quick screenshot “fn” key is programmed to quickly access Snip & Sketch, which is pre-installed in the laptop.

We got a very generous trackpad with the X571. So, navigation and gestures are quite easy. We have a matte finish surface where gliding isn’t much of a hassle either. There’s also a welcome feature in the form of a fingerprint scanner embedded in the top right-hand corner of the trackpad. It’s accurate and works well for quick sign-ins with Windows Hello. There aren’t any divisions for the left and right clicks though.

There’s nothing much to say about the software that we have in the X571. Unlike its ROG cousins, we don’t have the Armoury Crate or any other game-centric programs. So, you’re left with an almost vanilla Windows 10 experience. Apart from some ASUS apps and the aforementioned Snip & Sketch software.

Powering our X571 review unit is the 9th Gen Intel i5-9300H and Nvidia GTX 1650. There is a variant out there packed with an i7 but the Philippine market only got the i5 version. Then we are treated with 8GB of RAM and a 512GB SSD.

The i5-9300H has been around for quite a while now and has already proven itself to be quite the mid-range powerhouse. As expected we got good results with scores ranging from 820-835 in Cinebench R15. As for the 512GB drive, despite being an SSD the read and write speeds aren’t what you’d expect. Couple that with the small storage capacity, which we easily erased thanks to the file sizes of Triple-A games nowadays. You’ll either have to add another drive in there or purchase an external one for our storage needs. However, as the drive is already an SSD despite its speeds, startups are quite zippy.

Unigine scores are what you’d expect from the i5-9300H and GTX 1650 combo. Not overly impressive but not disappointing either. Do note that these are all in the extreme preset.

3DMark results came in just about as what we expected too with the current CPU and GPU setup. Despite being a newer card the GTX 1650 isn’t part of the RTX line. So, testing for DLSS and Ray Tracing can’t be done. Although, it was able to run most of the 3DMark tests.

Let’s move on to gaming performance. As the X571 is slowly becoming a laptop full of surprises, here comes another one. To get proper metrics in our gaming benchmarks we played each title for about 15-30 minutes, unless it has its own benchmark tool. FPS Recording was done via FRAPS, we also used the program to cross-check during internal benchmarking of some games. To keep a uniformed format, all games are set in their maximum settings with V-Sync turned off. The GTX 1650 is truly proving itself to be the king of the budget segment as it was able to achieve amazing numbers during our testing.

While it did not reach the 60 fps sweet spot it wasn’t too far from it in most of our games. This means, with a little graphics settings tweaking you’ll be able to achieve that sweet spot. Judging from the numbers, it will be able to hit 60fps in medium to heavy games at about high settings. Now, if you happen to have the chance to grab the 120Hz display variant then you may have to further reduce graphics settings to hit that mark. Either way, the i5-9300H and GTX 1650 combo is no slouch and is more than enough to handle Triple-A gaming.

The out-of-the-box configuration for the X571 is kind of limited. For the Philippine market, we only have the choice of the 8GB + 512GB SSD config or the 4GB + 1TB HDD one. Our review unit is the former, as such we have but little wiggle room left in upgrades. We have two RAM slots, with one already occupied with your soldered out-of-the-box option. The laptop can accommodate up to 16GB of RAM. For storage, you get a 2.5″ SATA drive slot and an M.2 PCIe x2, which our model already occupied with a 512GB SSD. Still, it’s good to know that there’s an option for dual-drive storage.

The X571 was able to keep its GPU thermals in check with the GTX 1650 only reaching a max of 80°C across all tests. The i5-9300H, however, is a different story reaching as high as 97°C. The reason why the CPU reached such a high temperature is that the laptop doesn’t lower clock speeds as temps rise. The i5-9300H maintained its boost clock of 4.0GHz all throughout our testing. While it may be good that there is no thermal throttling involved, its still quite dangerous to expose the components to such high temperatures for a prolonged time.

While internal temps for the CPU are quite toasty that did not translate to external temperatures. The only noticeable heat on the chassis is at the upper portion of the keyboard near the rear exhaust vents. Despite that it’s only ever warm to the touch. Even the bottom panel wasn’t all that hot. Much so that we were able to play heavy games while the laptop was, well, on our lap.

This is where the X571 goes a bit overboard, acoustics. The fans of this unit are loud, we mean jet-engine type loud. It reached a max of 62dB, not even its speakers at max volume can completely drown out the blast. This is kind of a bummer as the speakers are great even for gaming. Sadly, if you wish to game we’re recommending plugging in your favorite audio gear. So your focus won’t be divided from listening to in-game audio to noticing sharp whistling sounds.

ASUS definitely has a winner in their hands with the X571. It has a unique yet simple design, great performance, amazing speakers, and some small yet quality of life features with the fingerprint scanner and keyboard shortcuts. On the flip side, we have a sizzling CPU, a very smudge and fingerprint magnet chassis, and jet-engine fans. However, the good outweighs the bad when it comes to the X571. Especially, when your asking price for the unit starts at just Php 39,995 (~$ 786). If you want a budget gaming machine with a punch and a sprinkle of elegance, then the X571 is a top choice.