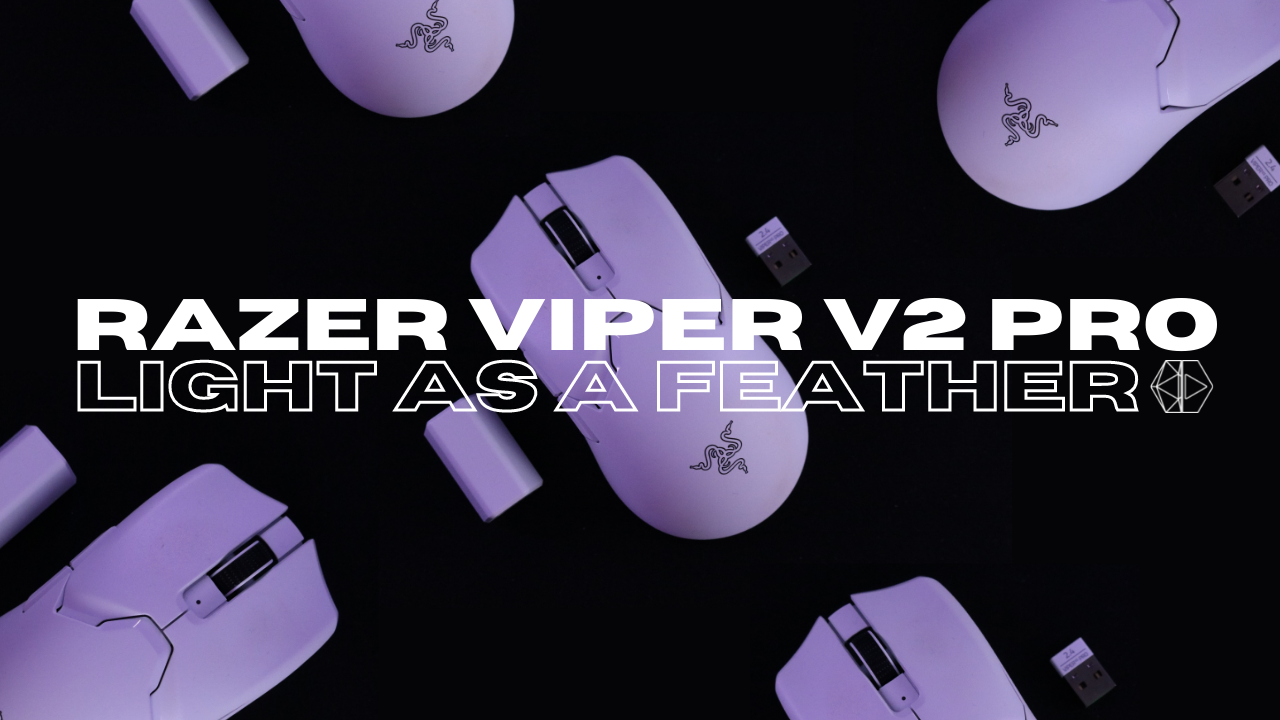 Razer added yet another entry to their older mice series with the release of the Viper V2 Pro. Staying true to the series’ niche, the new Viper is still a very lightweight device. Additionally, like its Ultimate brethren, it too is wireless. Does it have what it takes to separate itself from the rest of the competition? Let’s find out in our Razer Viper V2 Pro Review.

The Razer Viper line is one of the most basic looking the company has ever put out. Starting from the release of the 2019 Viper the entries in the series look remotely the same. Save for some with an ambidextrous setup, however, the Viper V2 Pro is perhaps the simplest of them all. It still very much adapts the aesthetic of the Viper line but unlike the rest, it just has the standard mouse setup. Meaning no extra buttons, no extra swag, no extra lighting, and no special version, well yet. The Razer logo doesn’t even have lights in it.

Even so, our review unit, the white version, exudes a kind of elegance thanks to its color. We can’t say for sure if the black one will have the same effect. However, despite having that elegance, it is easy to get dirty. After all, everything sticks easier and stands out more in white. Overall, we have no problems with how the mouse looks. At the end of the day you will still be using it for its function and not its fashion.

Built to Glide and Fly

Now the Viper series, as we’ve been saying, are a set of lightweight mice. The V2 Pro is no exception, however, this one does take it to the next level. Coming in at just 59g, this makes it the lightest one in the entire series. It’s also one of the lightest in the market. I am personally not a fan of lightweight mice as I prefer mine with a little heft or even weight control. Yet, to those looking for a lighter clicking companion, then the V2 Pro is definitely a choice on the list. From the moment I grabbed it I immediately noticed how light the device is.

You can even compare it to $5 to $10 brandless or weird mice you see around the market because of its weight. That’s not to say the Viper V2 Pro is made of cheap material. Far from it, it actually feels premium and well-made. It’s just the weight that can throw you off. Either way, at just 59g, you can easily fling the V2 Pro around your mouse or desk pad. It’s easy to lift and even easier to glide through surfaces. Pair that with a fast DPI and you’ll be twisting and turning at quick speeds in your games.

The Viper V2 Pro is not only the simplest looking one in the series, it also has the smallest amount of customization. Unlike the other ambidextrous options which has four thumb buttons, the V2 Pro only has your standard two on the left. Meaning as much as macro or reassigning buttons go, you don’t have much. You can remap the five buttons at your disposal which are the left and right clicks, the thumb buttons, and the mouse wheel (scroll up, down, and click). Though, there aren’t many instances where you’ll change the default function of the left and right clicks.

So really, the only choices you have are the thumb buttons and the three functions of the mouse wheel. Granted, most mice in the market have the same customization and after all, the main draw of the V2 Pro is its weight. Plus, while you do have a on-the-fly DPI button, it’s located at the bottom of the mouse. Meaning, you’ll have to lift it up and turn it around to change your DPI profile. Not the most convenient use of an on-the-fly option as you can’t really do that in the thick of battle in games like shooters or MOBAs.

Despite all that you still do have access to Razer’s Synapse 3 program for your customization needs. With no RGB lights to tinker with you are left with standard setting changes with the Synapse 3. That’s remapping the button functions, editing the DPI of the different on-the-fly profiles, and editing the wireless functions for sleep and low battery mode. Luckily you still get Razer Hypershift which effectively extends your button customization by allowing some form of overlap programming.

So at least you get a bit more breathing room despite the lack of physical number of buttons. Hypershift is actually the saving grace of the V2 Pro when it comes to button remapping, without that it wouldn’t have been enough. Lastly, while we do get Razer’s Gen-3 Optical mouse switches its not that easy to replace on your own. According to Razer though these switches boast a 90-Million click lifespan. Still, it would’ve been nice to have the option to change them.

While the Razer Viper V2 Pro offers very little in the looks and customization department over its predecessors it does have one edge — the Focus Pro 30k Optical Sensor. Razer’s latest optical sensor boasts a host of new features as the brand touts it to be the most precise of them all. Unlike the brand’s previous sensor the Focus Pro 30k brings with it the following:

Those extra customizations are all present in Razer’s Synapse 3 program. Now are they all just gimmicks? Well, not really as you do get the advertised features. Whether or not you’ll have the scenario to make use of them, it’s nice to know they are there.

As for the performance of the sensor itself. Suffice to say its one quick mouse. Couple the max DPI, IPS, and acceleration of the Focus Pro 30k with the weight of the mouse and you have no problems when it comes to speed. Plus you only have an RF 2.4GHz connection so it was smooth sailing as far as wireless connections go. In-game performance is definitely noticeable.

For fast-paced games such as shooters, MOBAs, and even competitive RTS you will definitely feel the speed and ease of moving your mouse around. However, again, as I am more accustomed to heftier mice I had to find the perfect DPI to match the weight of the mouse. In any case, I did feel the difference of quickly being able to turn in corners or move through maps thanks to how light the V2 Pro is.

Battery that lasts for days

For wireless devices there will always be the question of how long can it last before I have to plug it in. Well, for the Viper V2 Pro, Razer got it right. They promised a battery life of around 80 hours max and during my usage did get around that same run time. I was able to keep it running for around 4 days where I use it on average around 8 to 12 hours daily.

Of course, when its not in use it automatically sleeps saving juice though I never once turned it off manually during my time with it. Meaning, if you do turn it off instead of letting it sleep you’ll have an even longer use time than 80 hours. Charging time on the other hand is around 3 to 4 hours, which is not too bad as you can still use it wired. So, all in all, I am pretty happy with the Viper V2 Pro’s battery life.

The Razer Viper V2 Pro stays true to its series’ niche providing just enough while staying light and functional. You have a very simple aesthetic as the mouse focuses more on function than fashion. There isn’t much in the way of physical button customization but Razer makes up for it with their Synapse 3 program. Then, you have smooth wireless connection, great battery life, and a sensor that performs as advertised. Plus it is similarly priced as some of its brethren while providing better internals. Yet despite all those great things we do have one tiny problem with the Viper V2 Pro, its price. At Php 8,990 I expected a bit more, even if not for the physical buttons but at least for switch swapping.

I know, I may be nitpicking here but for the asking price there are a lot of other competitors that offers a bit more in the way of flexibility while weighing close to the V2 Pro. Don’t get me wrong, there isn’t really anything bad with the mouse other than its price. So, as far as lightweight wireless mice with just the right amount of flexibility goes, it can definitely separate itself from the competition. That’s it for our Razer Viper V2 Pro review.

ROG updates their gaming portfolio with the Meta Buffs lineup