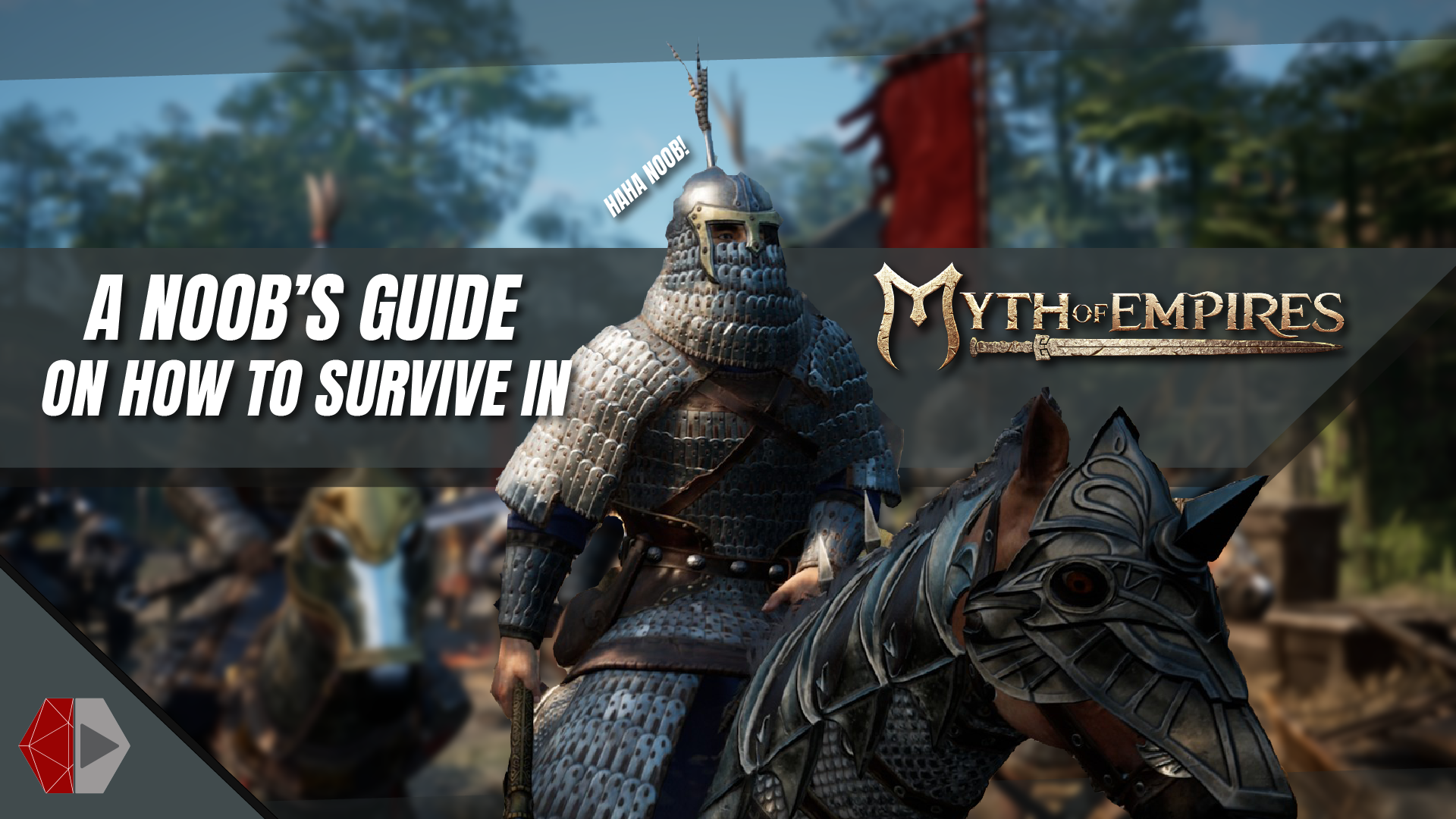 This is a guide and short review of Myth of Empires (MoE) from a newbie’s perspective. MoE is a multiplayer survival sandbox RPG set in 3rd century AD China. Developed by Angela Game, the alpha test was initially announced on April 7, 2021. The closed beta was released last October 2, and it is now in early access.

Just a disclaimer before we continue, this is my first survival game ever, so don’t expect a detailed guide. However, I will be giving tips and tricks for fellow noobs on how to survive in-game.

Where are the tutorials?

Most survival games don’t really have a tutorial, it is more of a learn on your own basis. I can only imagine the confusion when you first drop in the game. Controls are pretty basic, WASD to move and the mouse to perform actions. You also have a crafting system for the most basic items when you open your inventory.

As for how to build, you can always check the required items once you hover over a recipe. Although unlocking and progression comes from leveling up your character. You gather experience by hunting, gathering, crafting, and fighting. Basically, everything that you do gives you exp, so have fun and go nuts.

With the basics out of the way, you now face the question of what to gather? The first thing that you’d have to consider is gathering enough sticks and stones to create tools. Sure, you can punch trees and rocks but that will take a long time. Another thing is to gather enough grass to make straw ropes. Now don’t gather too much items, your character still has a weight limit. Going beyond 50% will slow your character down, and 90% will stop any movement.

The only quick remedy for this is to craft or drop the items you gathered. You do have storage options in the form of chests and cabinets. Then there’s your horse for on-the-go storage as it can also carry items and it has a bit more weight. Do take note though that when riding your horse both of your weights are considered. Meaning, going above 50% and 90% weight will still slow you down and stop any movement, respectively.

I have to build what?!

For first timers such as myself, building is confusing as it requires a couple of processed things (E.g. straw rope). Don’t fret though, give the game time to sink in and you would be building like a pro. Your first concern here is to build a campfire, so collect all the stones and twigs that you can. Also, collect a couple more of wood since you’d be needing it as fuel.

Another resource that you need to keep an eye out for in the early game is clay. You can easily find this material near bodies of water, it is harvested with the use of a hammer. This material is used for creating crafting stations and forges for ores. As for housing, it’s pretty basic, gather enough wood and grass and you could create the parts for your home.

You also get a hunger and stamina bar in Myth of Empires. Hunger is depleted for every second you are in game, doing any action hastens the depletion. Meanwhile, stamina lowers when you run, or attack using any tools or weapons. A neat trick here is to take your armor off while running, you run faster at lower stamina cost. Another suggestion is to tame a horse and ride it.

Hunger is a bit of a tough one to deal with since hunting is a bit hard for newbies. You could gain frogs and locusts through gathering grass. You could also fight the wildlife here, you could use projectiles like arrows or stones to start the fight. Trapping works too, you can make small traps for rabbits and foxes for you to eat or domesticate.

Now that you have mastered some of the basics, next up is the fighting tutorial. Now my tip here is to “NOT FIGHT EVERYTHING THAT YOU SEE!”. It may look tempting to fight animals and villagers, but know that you are building hostility for every kill. Getting to about a Lv.10 hostility with anywildlife or NPC faction will make them aggressive towards you. So, just farm enough meat from time to time as to not build hostility or aggression.

This is the same for humans (NPC), you don’t need to attack everyone that you see. If you come across a Vagrant know that you have the opportunity to turn them into subordinates. This can be done by giving them the items they request such as food, stone, or other materials and equipment.

Oh did I forget to mention? you have to join a guild sooner or later, that or create your own. Being part of a guild has a lot of perks and a few disadvantages, I’ll just list a few down below.

Oh, I almost forgot, time to teach you how to tame a horse. Taming horses isn’t as easy as it sounds in Myth of Empires, this will test your skills and control. The first step is to craft a Fodder and Rein, just chop down trees and harvest grass for the materials. Once you have your fodder, just throw it near a horse, wait for it to start eating the fodder, and get close to it from behind. The easiest way to do approach it is by crouching and avoiding its line of sight. Always pay attention to the detection bar on top of the horse as to not spook it away.

Now ready the rein in your inventory and press “E” to ride the horse. This will toggle a mini game wherein you have to avoid the horse from hitting terrain. Another part of the mini game is for you to keep the horse calm by clicking the right mouse buttons. The trick here is to keep your horse going in a loop by holding down either the A or D button. Once you have your horse, all you need now is to make a saddle for it.

As for why it isn’t currently available on steam, the developers are facing a copyright claim. This triggered a platform-wide warning from the DMCA for anyone hosting servers or selling the game to temporarily delist it or end offering new services. As of writing Angela Game is in a legal battle to keep MoE on its feet. They will still continue pushing updates amidst all the chaos. However, we’re not certain about the fate of the game, though we do hope things get resolved as MoE is a fun survival title. Either way, you can still grab a copy of the game here should you wish to try it out.

I do hope that this guide will help you in your journey as a newbie in Myth of Empires. It may be hard at first, but grab a couple of friends and things will be easy-pz-lemon-squeezy soon enough. Well, until next time!

ROG bolsters their desktop portfolio with the Strix GA35, GT35, GA15, and GT15

Romancing SaGa 3 out now in the West

Contents hide
Where are the tutorials?
Gather everything(?)
I have to build what?!
I’m tired and hungry
Don’t fight that!
Join a Guild
Pros
Cons
Finally, Horse Taming!
Pending Copyright claims