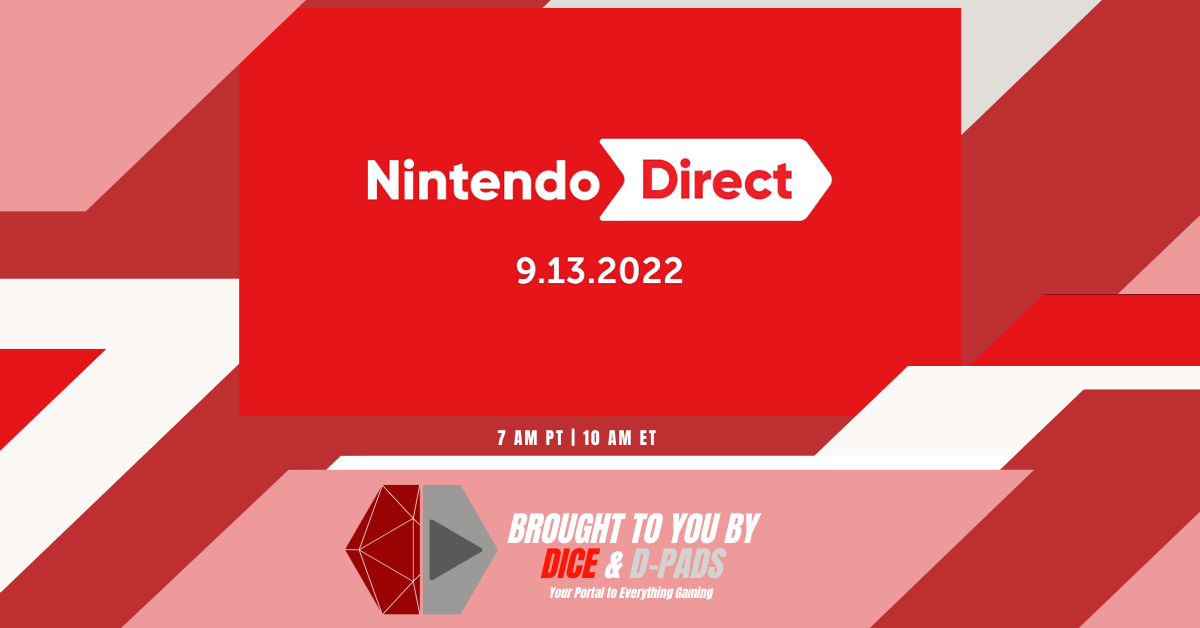 Despite speculation of delays, Nintendo went on ahead with this month’s Direct. Boy oh boy was it a spicy one as we got some pretty big announcements and reveals. If you missed out on tuning in or don’t have the time to sit through the hour-long presentation then we’ve got you. Here are all the major announcements from the September 2022 Nintendo Direct.

Starting off the presentation was the announcement of the next installment in the Fire Emblem series. Players are thrust into a new world called Elios and back into a more classical setting rather than a school one with Three Houses. The game will feature a unique new system dubbed Engage.

Basically, characters can equip rings that allow them to call upon and combine their powers with characters from previous Fire Emblem titles. Fire Emblem Engage releases on January 20th next year, which is actually just a few months away.

The Legend of Zelda: Tears of the Kingdom

The follow-up to The Legend of Zelda: BotW finally has a name and even a release date. All in one spectacular new trailer from this month’s direct. The title of what we’ve been calling BotW 2 is — The Legend of Zelda: Tears of the Kingdom. Apart from the title drop and the visuals we saw, Nintendo also dropped the release date. This one though is a little further away coming out on May 12th, 2023.

The follow-up to one of Square Enix’s newest RPG series is finally coming after almost 4 years. Octopath Traveler II brings back most of the gameplay system we have with the first title. However, we’re getting a new set of protagonists in a different and a little more bustling era.

Their stories still intertwine with one another although path actions now differ depending on the time of day. Much like Fire Emblem we only have to wait a few months as the game releases on February 24th, 2023.

After almost a decade since the release of its last title, we’re finally getting a follow-up to Pikmin. While we did get an enhanced port back in 2020, a sequel still hits differently. That might be the case with Pikmin 4, arriving sometime next year.

We would’ve liked a few more details though as we only got a quick trailer you see above. Nothing but a teaser of a garden then the Pikmin title. Guess we’ll have to wait and see in the coming weeks or months to get some more details.

After almost 9 years since the release of its last final fantasy sequel, Theatrhythm is getting a new game in the form of Final Bar Line. This time, Theatrhythym is going back to its roots featuring over 385 songs from the Final Fantasy series. The game will come out on February 16th, 2023. A digital deluxe edition will be available featuring 27 exclusive songs.

Another year means another Just Dance for us to groove to. This time though, we’re getting some brand new features such as Online Multiplayer and Personalized Recommendations base on your interests. Finally, we also have a revamped UI and, of course, updates whole year long for new songs.

A magical farming sim for 1 to 4 players is coming to the Nintendo Switch in the form of Fae Farm. Cultivate your own farm or have others help you along the way, online or locally. Use magic to aid in your farming needs and forge bonds with the residents of your island home, Azoria. This new take on the farming sim genre releases sometime in Spring 2023.

Atelier Ryza 3: Alchemist of the End & the Secret Key

Koei Tecmo is back with another Atelier Ryza coming sometime in 2023. This one is dubbed “Atelier Ryza 3: Alchemist of the End & the Secret Key” and will feature Ryza and her friends as they explore the sudden appearance of a mysterious group of islands.

Master Detective Archives: RAIN CODE is a new title from the minds behind the widely successful Danganronpa series. This time around players take on the role of Yuma, an amnesiac detective-in-training. The world of the game is divided into two factions, Megacorporations and Master Detectives, beings with unique powers. The game launches sometime in 2023.

Zack returns as players get to know the story before the events of Final Fantasy VII. Crisis Core – Final Fantasy VII – Reunion features a huge graphical update over the original including updated combat systems and new soundtrack arrangements. The remaster arrives on the Nintendo Switch on December 13, 2022.

The critically acclaimed two-player co-op title, It Takes Two will finally be coming to the Nintendo Switch a year after its release. The Switch port releases on November 4th, 2022

Dive back into one of the classics of the Tales series as Tales of Symphonia is getting a remaster for the Nintendo Switch. This has the same old story but with enhanced graphics and gameplay. The remaster will come sometime in early 2023.

About 14 years since its release on the Wii, Fatal Frame: Mask of the Lunar Eclipse is making a comeback with a remastered version for the Nintendo Switch. This one will include upgraded graphics while maintaining the gripping story it showcased all those years ago. The game releases sometime in Spring 2023.

Story of Seasons: A Wonderful Life

Harvest Moon: A Wonderful Life is getting a remake for the Nintendo Switch taking on the name Story of Seasons: A Wonderful Life. Much of what the game offered all those years ago will be coming back here along with a much-needed visual make-over. The remake will release sometime in 2023.

A remake of the 12-year-old 4-player Kirby title is in the works and is coming to the Nintendo Switch in a few months. Kirby’s Return to Dream Land Deluxe will feature the same good old gameplay of the original with visual and gameplay improvements. The game comes out on February 24, 2023.

XSeed’s Rune Factory 3 makes a comeback to the Switch in the form of Rune Factory 3 Special. Players will be able to enjoy much of the original’s gameplay systems alongside a new mode. That new mode is dubbed “Newlywed” allowing players to have more interactions with their spouses. The remake launches sometime in Spring 2023.

After 10 years, the Japanese Indie Horror title, Ib, is getting a remake for the Nintendo Switch. Players take control of Ib as they find items and solve puzzles to get through the story of the game. Much like the original, the ending will depend on the player’s actions and choices during their playthrough. Ib releases for the Nintendo Switch sometime in Spring 2023.

Remakes of two Front Mission titles are coming out in succession to the Nintendo Switch. Front Mission 1st: Remake will, well, come first this October 22nd followed by Front Mission 2 sometime in 2023.

And that’s it for all the big announcements and drops from the September 2022 Nintendo Direct. There were a few minor announcements regarding updates on current games which you can find here. If you want to watch the entire presentation then head on over here.