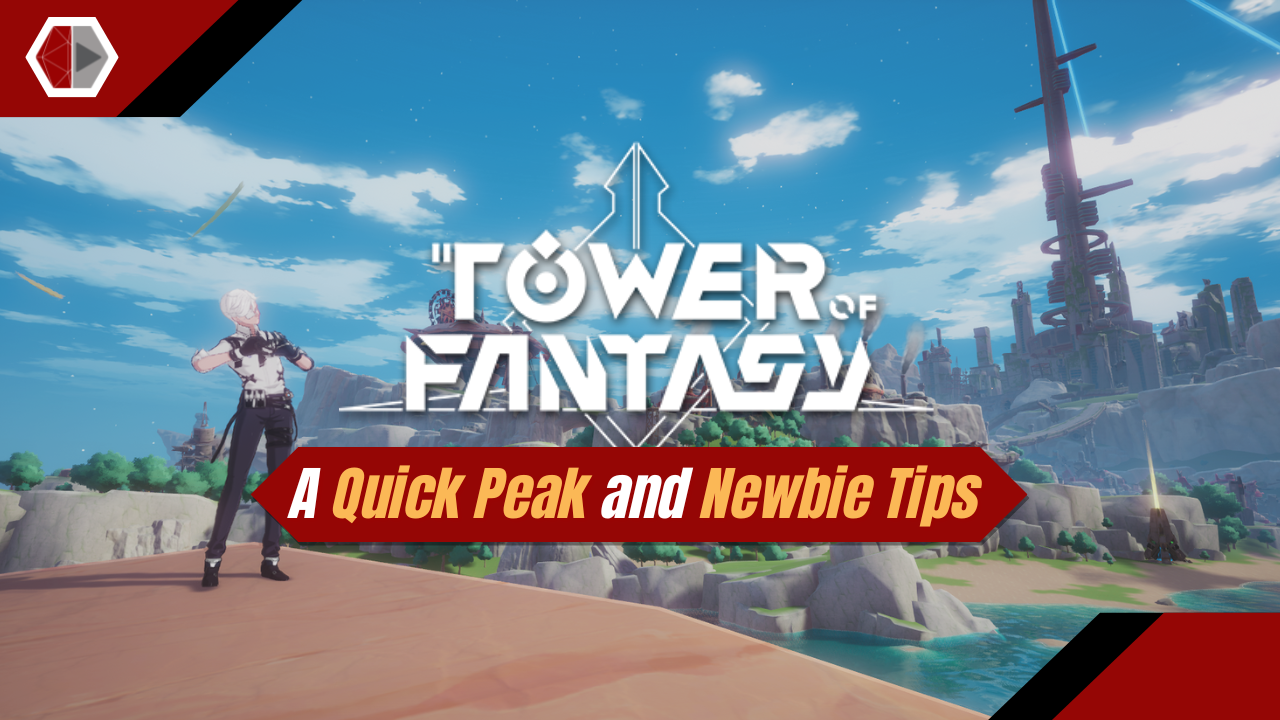 With high quality games headed to mobile devices, most of them carry a microtransaction system in the form of gachas. Some games are really punishing when it comes to the RNG. Meanwhile, some are more rewarding that it becomes boring. However, Tower of Fantasy hits that sweet spot of grinding hard and getting your reward as intended. Yet, more on the Gacha later, let’s dive in and find out about this new game from Perfect World.

Just like any RPG game, you are given a choice to customize your first character. However, the first-ever choice in Tower of Fantasy is whether you choose a male or female character. Character customization comes at a later time as you first need to learn the basics. You learn camera and character movement, weapon skills, and other basic mechanics before the game actually starts. Just a tip: make sure to gather the supplies at the starting area.

Character customization unlocks after you meet the first character of the main storyline. The system offers a variety of pre-made assets for your character to use. Do you fancy full customization? Then it’s possible as you can change almost every aspect of your character. From hair style and color to the iris and pupils of each eye, and even your character’s body type. Just make sure that you’re good with it as changing your character in the future is costly.

First things first, try and improve your suppressors by participating in daily activities. Once you’re all set, other areas are safe for you to explore and discover. Enable spacerifts for you to fast travel from one location to another, this also gives you exploration points. Exploration points are divided per area that you visit and explore. Hitting a certain exploration milestone rewards you with items ranging from weapon upgrades to clothing.

Check your minimap for any white blots or spheres, it means that a drop is near. I also suggest upgrading the flyer to rank 1 for it to stop consuming stamina. Also, set up your different weapon and relic slots as some drops can only be gathered with the right equipment.

The world of Tower of Fantasy is also riddled with puzzles. From the one-time puzzles of world exploration to daily co-op challenges. Solving or beating these trials gives experience and different rewards to aid you in your journey. However, don’t be deterred by co-op challenges as some of them are doable alone.

There are world bosses in the game, although they are hard to beat alone as they scale with your level. So party up or find active raids in the world chat so you can participate in one. You can hot join any available party and teleport, or just barge in alone. The world bosses’ supply box drops SR-SSR weapons and matrices. A tip here is to just join a party and teleport to them, as changing channels has a 30-minute cooldown.

Ruins are the generated dungeons in Tower of Fantasy. These places provide challenges and training for players in relation to their relics. Beating a ruin grants a relic or shards of it. However, be warned as ruins are hard and can only be challenged alone. So make sure to do some preparations.

Getting around Aesperia is going to be boring on foot, good thing vehicles exist. You will get access to your vehicle in an early part of the story mission. Vehicles can be upgraded to unlock different color variations. Also, you can get vehicle parts in world explorations and from certain field monsters. Just know that the drop rate for them are very low and may take hours to farm.

Gacha Have em all

Just like any popular open-world RPG, Tower of Fantasy also features Gacha systems or a luck-based equipment drop. You get a Black Gold or Base Chip for every pull. You can exchange these chips for weapons or items in the commissary. A Pity system also exists, this guarantees an SSR weapon or matrice to drop after a set amount of pulls.

The loots are divided as follows (from most probable to least probable):

The Gacha system can be played using 5 types of resources

You can save up your pity and use it when an update comes, especially for limited-time banners. The pity progress from one banner is transferable to the next one, so don’t worry too much about losing it. However, Black Flame Golds (another reward for pulling) are converted into regular Black Gold after an event. They are used to buy weapons and resources in the commissary.

Unlike other games, here you can equip any type of weapon without a penalty. Although, there is also no such thing as a weapon mastery system in the game. Tower of Fantasy replaced it with a Weapon Resonance Effect wherein you are given bonuses based on your weapons. Weapons are divided into three classes: DPS (Damage per Second), Support, and Defense style.

Equipping two of the same weapons or one of each gives you a particular resonance and bonus. Weapons also have different elements, so it is better to know your opponents beforehand, especially in challenges or events. Make use of the three weapon set slots as you can easily change your weapons there. A tip is to have one of each resonance type for each slot.

Aside from upgrading weapons, you can also attach Matrices to it. The way they work is you gain bonus stats based on the Matrices equipped to a weapon. They do come in sets, completing a 2,3,4 piece set will provide bonuses to your current weapon.

Matrices can also be upgraded to certain levels and advancements to improve the stats and bonuses given. You can gain them from daily rewards, world bosses, or in the Gacha. Since these drop from world bosses, you can check which world boss drops the Matrice you need.

As established earlier, instead of having characters with weapons specialty, the player is allowed to use any weapons. However, players are allowed to use the skins in Tower of Fantasy in the form of Simulcrams. Basically, the simulcrams offer no special bonuses for using a character’s signature weapons. You can give gifts to unlock hidden dialogues and traits. You can only activate one trait at a time though.

These traits can also be upgraded later on with more gifts. Another thing is that you can upgrade SSR weapons to their 3rd advancements (A3) to unlock the Simulcram’s advanced look. It doesn’t give any bonuses, other than showing off your achievement. If you’re only starting as F2P (Free-to-Play) I suggest that you focus on one or two simulcram traits.

Tower of Fantasy is a generous game when it comes to giving its players materials and currency. However, it doesn’t mean that you can get them easily, you still need to work for them. Most of these materials can be found in the daily activities list.

I hope that this helps you in getting to know Tower of Fantasy. See you in the land of Aesperia dear Traveller!

Valkyrie Anatomia - The Origin to be released Globally