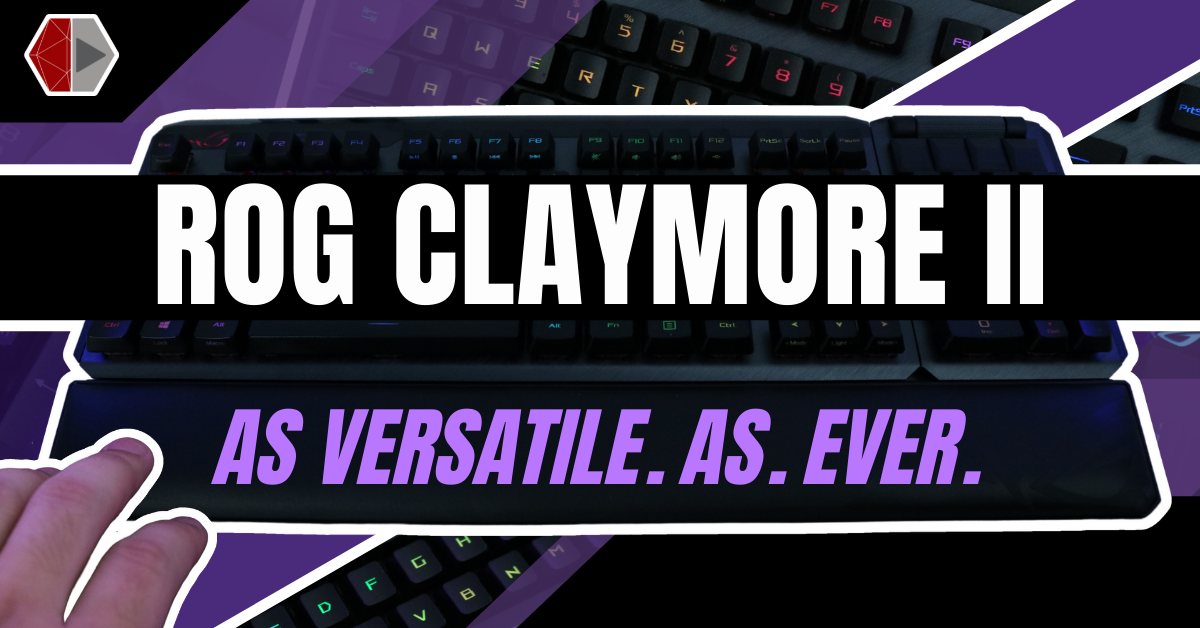 ROG is back with another versatile keyboard with the ROG Claymore II, is it better than the last? Here’s our review!

ROG is not one to let innovations die as such they are following up on one of their eye-catching peripherals, the Claymore. Although, it did take around 5 years for them to do so, better late than never I guess. The follow-up is aptly named the ROG Claymore II. This second iteration once again returns with that famous modular numpad design with the benefit of wireless connection. However, is being wireless and modular enough? Let’s find out in our ROG Claymore II Review.

The ROG Claymore II relatively has the same size as its predecessor although design-wise it does look a bit bulkier. That’s all thanks to the full bar we have on top compared to the bottom bezel we had with the original. It also weighs as much as it looks though that only makes it feel a lot more premium. Speaking of premium, the Claymore II moves away from the aggressive gamer look to a more sophisticated design. The keyboard made a shift from a black body with intricate linings to a silver one with a brushed metal aesthetic.

It still somewhat screams gamer, but more “elegant gamer” than “hardcore gamer”, if you get what I mean. We do, however, still have a few flairs. Instead of just a basic single notification light for the battery, we’re getting full-on bars on the upper right portion. Kind of like how digital fuel gauges work on cars. At full juice this light is green then turns red when it’s time for a charge, neat. Overall, I’m quite happy with how the Claymore II looks, though it will still somewhat be a burden to carry around due to its weight.

Even more versatile than the last

The Claymore made waves back in 2016 thanks to its modular numpad system. Making it one versatile keyboard that saves space but can still provide added utility. Now, the Claymore II continues that same system only this time pairing it with 2.4 GHz wireless connectivity. You’re not limited to just a wireless connection though, if you so wish you can still use it wired via USB-C. Plus you have an extra USB-A passthrough, so you’re not missing out on ports if you ever plan on going wired. Especially, since what you’re taking out is a USB-C port, so you essentially have an extra USB-A.

Oh and worry not, if you don’t have a type-C port there is an included adapter. This turns an already flexible system even more flexible and free. You can still position the extra numpad on either side of the keyboard. So it’s still both left and right-handed friendly. You also have some pretty neat extra controls thanks to a volume wheel and 4 customizable buttons. That’s 4 more buttons than the previous Claymore’s numpad. So, setting easy Macros for your games is now a reality.

While the original Claymore featured the widely known Cherry MX switches, the II moves away from them and instead uses ROG’s very own. What we have under the hood in our review unit are ROG’s Red RX Optical Mechanical Switches. Although, the keyboard also has a blue switch variant for those who prefer more tactility. Now, I’ll be honest I am not a fan of red switches or linear ones for that matter, it’s just not my style.

However, it doesn’t mean ROG’s RX Switches are bad, it’s just more of a personal preference. If you’re the type to not mind or even enjoy red switches then the one on the Claymore II is not too shabby. It performs the way red switches should perform with fast key travel, response, and silent presses. So these are still linear switches through and through.

Battery that lasts a lifetime (almost)

If there is one thing that truly impressed us with the ROG Claymore II is its battery life. This keyboard can last almost an entire week on constant usage before needing a charge. I for one am always on my laptop or PC using it more than 12 hours a day, constantly playing and/or typing. The Claymore II with my usage and activity, lasted for about 5 and a half days before it truly drained out.

That’s even more than what ROG advertised with their 43-hour rating with everything on. In comparison, my daily driver the Keychron K1 lasts about 2 days. So the Claymore II can squeeze out double the battery life of that. Charging takes roughly 3 to 4 hours when in use but is a little faster if you leave it off. I guess that 4,000mAh battery really paid off.

The Claymore II continues the greatness of its ancestor while offering more refined and additional features. The versatility is still there but even more so with the additional connectivity option and macro buttons. The design shift may not be for all though as while it did move away from being too aggressive it did make the keyboard look a bit bulkier. While all of this seems enticing and exciting you do have to shell out quite a bit for all those features and flexibility.

As it stands, the ROG Claymore II has a hefty price tag of Php 13,680 (~$266). Yet, the ROG Claymore II is a complete package offering both the freedom of space of a TKL board and the utility of a full keyboard. Not to mention you also have a magnetic locking wrist rest out of the box, offering you that bonus comfort right off the bat. So, if you can afford that much, then it’s safe to say that it’s worth every penny.