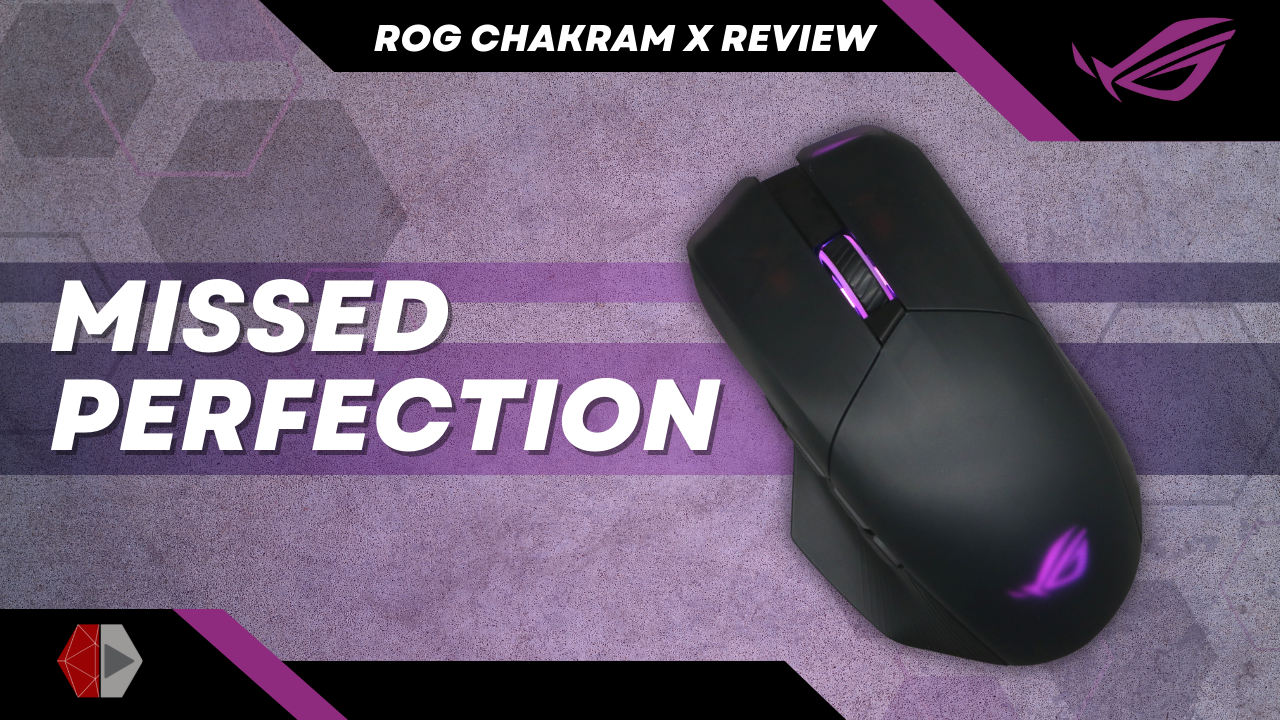 ROG is kicking it up a notch as they slap on more features to their Chakram gaming mouse line. We already have the stripped-down version Core, the standard wireless one, and now we’re getting the Chakram X. This one has additional buttons while retaining all the things the standard Chakram offers. However, is the price jump justifiable and do you really need those extra buttons? Let’s find out in our ROG Chakram X Review.

Contents hide
The same look but with more buttons
Feels solid and ergonomic
Buttons and customization galore!
Programmable buttons
Lighting
Performance and Mouse Surface calibration
Deconstructed mouse anyone?
The famed tri-mode connectivity
The ROG AimPoint Optical Sensor
A battery life that lasts a lifetime
Verdict
Reasons to Get
Reasons not to Get
Specifications

The same look but with more buttons

If you put the Chakram X side-by-side with the standard Chakram, you won’t notice too much of a difference. The curves are the same, the translucent buttons and palm rest are the same, RGB placements are the same, and you even still have that small joystick.

So what’s the difference? Well, the addition of two more buttons just below the traditional thumb buttons. If it weren’t for those two, you’d easily mistake the Chakram X for the Chakram. Looks-wise, it still very much screams gaming mouse with RGB bling.

I wasn’t lucky enough to review the standard Chakram but the Chakram X sure feels premium. I’m assuming this was how the original one felt in your hands too. Once you hold it you know it’s solid and has heft. It definitely feels like it can take a beating and is worth a lot of dough.

Though there is no way to control the weight, which might turn off those looking for a lighter or heavier configuration. Even so, it feels nice to the touch and can be used for prolonged sessions without feeling hand fatigue. That’s thanks to its curved ergonomic design, chassis materials, and thumb rest.

I’ve said it before and I’ll say it again, the Chakram X has a boatload of buttons. You have your left and right clicks, scroll wheel, joystick, and four thumb buttons. If you thought the Chakram was already flexible and versatile, well the Chakram X is even more. All of these are programmable through Armory Crate.

You have a wide array of choices from Windows functions to even controller inputs. You’ll be able to customize those buttons to do a number of things to fit your current situation. As for the joystick, you have options for vertical or horizontal movement patterns.

All of the buttons have great feedback and tactility, not just the left and right ones with ROG switches but even the sides and scroll wheel. However, one glaring problem is their size and positioning, at least for the thumb buttons and the joystick. All four of the thumb ones are a little too small making it hard to accurately press them in their time of need.

Such as when you use them for games like RPGs and MMOs for skills and shortcuts. More often than not, you may find yourself using the wrong skill or shortcut. Plus, the spacing between the joystick and the rearmost button make for awkward switching, which can even strain your thumb after multiple repetitions. So in the end, the two extra buttons became more of a nuisance than a welcome addition.

Being an ROG with RGB means support for its Aura Sync ecosystem. As such, the Chakram X has a lot of lighting options at its disposal. Including, the Aura creator which allows for even more shenanigans with your Christmas lights.

If you want to take light customization even further then ROG has provided the means to replace the ROG logo badge on the palm rest. We get a blank badge you can etch and create your own illuminated logo, icon, or symbol.

Lights and buttons aren’t the only things you can tweak with the Chakram X. The mouse also gives you control over how it functions from its DPI settings to its polling rate to its angle snapping and even angle tuning. For on-the-fly DPI, you have the option to choose between 4 presets by pressing a button at the bottom of the mouse. Alternatively, you can switch the mouse wheel settings to use the DPI-on-scroll feature for scrolling up or down for quicker access.

You can even adjust the mouse’s behavior on surfaces. There are preset to match the different ROG mousepads already in the market. Though you still have the option for manual configuration in case you’re using it on a different surface or mousepad. There’s even a setting to adjust the lift-off distance, which is a first and a big plus for me.

The Chakram X brings in another nifty feature from its predecessor, that’s hardware flexibility and customization. While the mouse already has ROG switches pre-installed you’re given a set of extra OMRONs, in case those don’t last the test of time. Replacing them is such a breeze as you can easily disassemble the mouse. The buttons as well as the palm cover are magnetic making them easy to remove.

All you have to do is lift at the right spot and snap it back in without the need for screwdrivers or other tools. The famed ROG push-fit switch socket design is also here, making it easy to swap out those switches. You’re given a puller in the box already. You can even slot in your preferred switch if Omron isn’t your thing. Even the joystick can be changed depending on the length you prefer or just close out its button area entirely.

Once again the Chakram X brings with it something from the first Chakram, that’s tri-mode connectivity. Whether you prefer to have your mouse wired or wireless, this one has you covered. We’ve got two options to go cable-less, that’s Bluetooth and via a 2.4GHz RF dongle. As always for the best wireless experience, you better go the RF dongle route.

The Bluetooth option ain’t bad but you will definitely notice some latency every now and then compared to the 2.4GHz dongle option. Going wired means you get to use the ROG paracord, a long braided and flexible cable to allow for smoother and faster glides. You can swap between the 3-modes with ease thanks to a switch at the bottom of the mouse.

ROG went in-house for the sensor of the Chakram X with the AimPoint optical sensor. This creation by the Republic boasts up to 36,000 DPI, up to 650 IPS, and an 8,000Hz polling rate. Though to achieve that 8k polling rate you need to be on a wired connection.

It performs as advertised with great precision, consistent tracking, and good accuracy. Making it a perfect match for fast-paced games such as MOBAs and FPS. Especially with all the customization you can do over at Armory Crate, which we talked about earlier.

A battery life that lasts a lifetime

One of the most impressive aspects of the Chakram X for me is not its joystick or plethora of customization but its insane battery life. ROG claims it can last up to 114 hours and they’re not wrong about that. This mouse hates getting charged as it lasts us about 5 days to a week tops. That’s with constant 12 to 16 hours of daily use in gaming and mundane tasks.

Apart from the amazing battery it houses, the auto sleep feature also contributes greatly to prolonging battery life. As it eliminates the need to turn the device off. Charging isn’t as long as expected too as it goes from zero to 100 in about 2 to 3 hours thanks to fast charging. You also have Qi charging support if you want the battery to last even longer than it already can.

The ROG Chakram X checks a lot of marks you’d want from a wireless gaming mouse. It has great feel and ergonomics, tactile buttons, a well-performing sensor, amazing battery life, and a ton of customization. You even get a lot of buttons and a joystick plus ease of access to swap out your switches. To top it all off you have an extra gimmick with the customizable badge.

Yet, despite all these strong suites the ROG Chakram X dropped the ball with the size and placement of the extra buttons. The factor that should’ve separated itself from its predecessor alongside its new sensor. However, we can still recommend the Chakram X over the original as you will only be paying an extra Php 580 for more buttons and a better sensor. Which is not too bad of a deal.

If you have the patience to look past its button flaws or really like having a joystick then Chakram X is a good choice. That is if you have the budget to shell out Php 8,580 (~$146). Sadly, there are more affordable, or even same-priced, alternatives out there that are wireless and have the same or more buttons that are functional. If only ROG nailed the button size and placement of those two thumb buttons then the Chakram X would’ve been a perfect wireless gaming mouse.

Contents hide
The same look but with more buttons
Feels solid and ergonomic
Buttons and customization galore!
Programmable buttons
Lighting
Performance and Mouse Surface calibration
Deconstructed mouse anyone?
The famed tri-mode connectivity
The ROG AimPoint Optical Sensor
A battery life that lasts a lifetime
Verdict
Reasons to Get
Reasons not to Get
Specifications