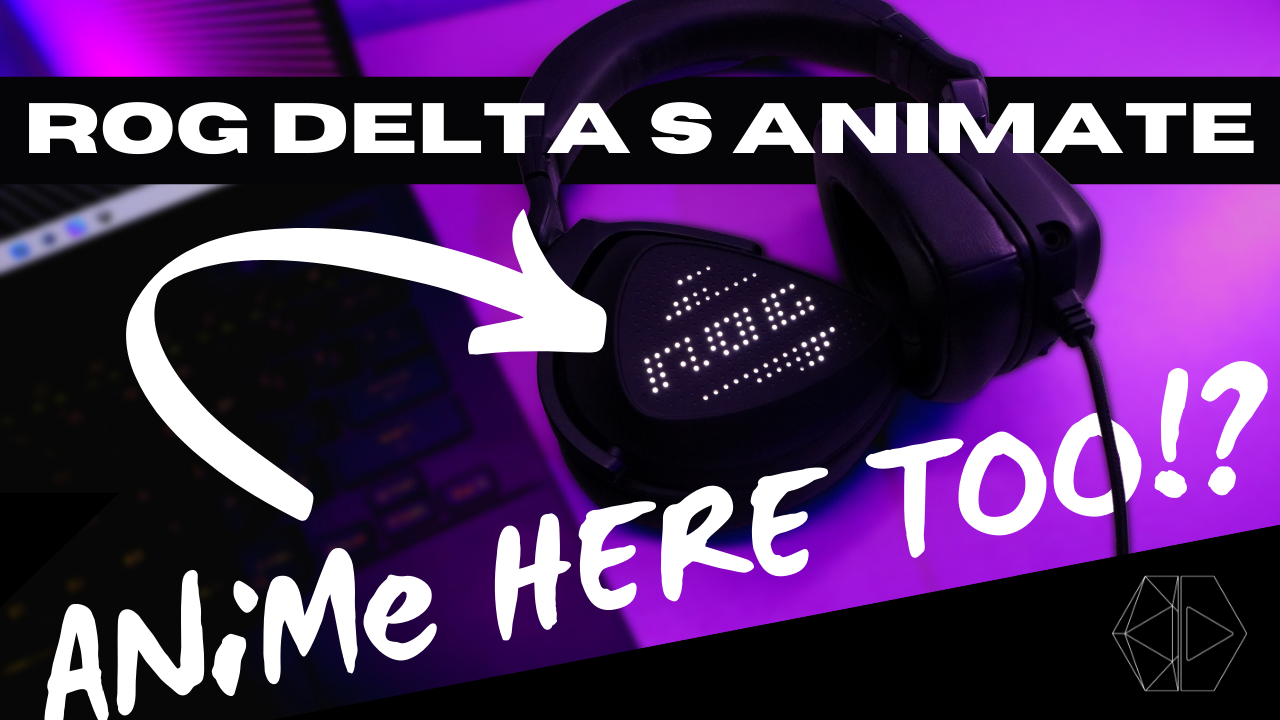 We saw it first on the Zephyrus G14, then it trickled down to peripherals such as the ROG Strix Flare II Animate. Now, ROG is keeping the AniMe streak alive as it introduces it to headphones too courtesy of the ROG Delta S Animate. Is AniMe the only thing it offers or can it give you more? Find out in our ROG Delta S Animate Review.

AniMe on some cans

The ROG Delta S Animate forgoes most of the recent headphone design trends and went for a more minimalistic approach. Save, of course, for the inclusion of the infamous AniMe Matrix. ROG did it again, as it seems they’ve been slapping their AniMe Matrix on anything and everything they’ve been releasing this couple of months. However, apart from the bling the customizable LED light display offers, nothing else stands out for the Delta S Animate.

That’s not necessarily a bad thing as the headphones still do look and feel nice. You have an all-black exterior all throughout from the earcups all the way to the headband. You may not have RGB here like what most headphones offer nowadays but you do get that AniMe Matrix flare. Granted, it’s not as customizable as what we’ve seen with the latest Zephyrus G14, but you still have a few options under its belt. Want a heart on both those earcups? You got it.

In terms of comfort, well at first the ear cups felt weird for me as it’s not the usual oblong or circle design. What you have here is more of a D-shaped style, which is still large enough to snuggle your ears. However, it takes a little bit of getting used to at first, especially if you’re coming from the traditional circle x oblong styles. Even so, once I got the hang of it the headphones are comfy enough for long hours of gaming. It’s also not that heavy, so it’s not tiring or irritating in the long run. Lastly, you do get replacement pads if you feel like the leatherette ain’t your style.

As I’ve said, the ROG Delta S Animate is as minimal as it gets not only in design but also in other extra functions. However, there’s nothing much you need from it really apart from the usual media controls. You have those on the left-hand side in a form of a short volume wheel that also doubles as a mic mute button. Then you have a quick light toggle switch with options to turn the AniMe Matrix on the cups on or off or have it sync with whatever you’re listening to.

Apart from that, there’s nothing else, you don’t have a dongle for the media controls as you already have it on the earcups. Plus there are dual audio modes to play with. So, while you do only have the basic media controls, that’s more than enough. However, you do need to get used to feeling for the buttons on the left earcup.

Headphone mics aren’t really stellar as that’s not really its area of focus. Yet, the mic on the ROG Delta S Animate is good enough for gaming and team conversations. I wouldn’t recommend it for streaming, even if it does feature the famous ASUS noise cancellation feature. It still has that tin can effect headphone mics are known for. Either way, you won’t need to get an external mic if all you plan on doing is talking to teammates and joining meetings.

The ROG Delta S Animate has ASUS’ very own essence drivers to handle its audio needs in addition to having the Hi-fi ESS 9281 Quad Dac amplifier and virtual 7.1. The result? Great audio with explosive volumes. The mids, highs, and lows are all present and it makes for an immersive experience whether in games or when consuming media. This is especially helpful when playing games that require precise audio cues. Like shooter games or puzzle games with sound challenges. Plus, you have some fine-tuning options via the Armoury Crate to further improve your audio experience.

However, you do have to keep the volume on the down-low at times as these headphones can really blast through your ears. In my time with it I never crossed the 25 volume level point as anything above that is just too loud for me. Although, if your goal is to drown out external noise then the ROG Delta S Animte’s got that more than covered. Just be careful exposing yourself to loud sounds for a prolonged period as it can damage your ears.

Probably an area where the ROG Delta S Animate will be most undervalued for is its support for more than one platform. Thanks to a USB Type-C main connection and an accompanying USB-C to USB-A cable, the headphones can connect to almost all devices. Including PCs, Cellphones, and even consoles such as the Nintendo Switch and PS4. The main cable though isn’t that long so you may encounter some problems if your plugs are quite far. However, that can easily be solved by the USB-C to USB-A extra cable we mentioned earlier. Either way, you have a bunch of options for the ROG Delta S Animate, so it’s not just a PC headphone.

The ROG Delta S Animate is a very unassuming headset with its simple and minimalistic design. Yet, it does still offer some flare thanks to the ever-so-infamous AniMe Matrix display of the republic. It may not be as customizable as other AniMe Matrix displays but it still provides its users with some bling. Although, the strongest selling point of the device is not in its customizable LED light feature but in its audio quality and device support. The ROG Delta S Animate has amazing audio drivers and an amplifier that can blow the roof.

It can certainly up your game, especially in titles requiring precise audio cues. Then you can carry all that goodness to other devices as well such as phones or consoles. However, while the ROG Delta S Animate may be a great set of cans that offers more than just an AniMe bling it will put a hole in your wallet. So, unless you have Php 16,500 to blow on a set of audio gear, you may have to pass on this one.