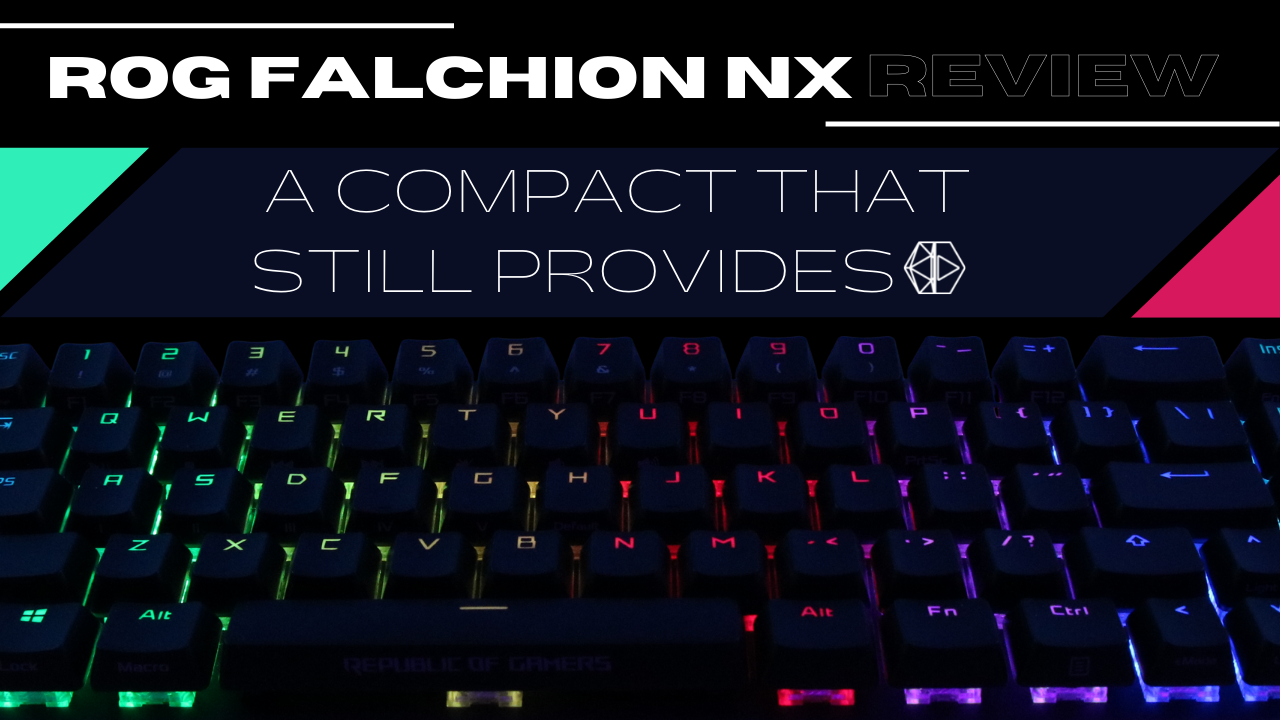 The already loved and adored Falchion receives a newer version this 2022 with some ROG NX treatment. It keeps much of what its predecessor has to offer but with some switch upgrades. Will you still love and adore it? Find out in our ROG Falchion NX review!

Still compact, still has no compromise

The slogan for the original Falchion was “Compact, Without Compromise” and that statement still holds true for the ROG Falchion NX. As we’ve mentioned earlier nothing was really changed on the outside for the Falchion NX. It’s still a 65% keyboard with a compact, easy-to-carry frame. Still looks as simple as it gets until you load it up in its keyboard cover case.

At which point it now looks like a game-ready battle station that provides protection from the elements. Lastly, I do appreciate that it retained the small stands as I like my keyboards at an upright position, even though those pegs don’t elevate it much. Overall it’s a simple keyboard that leans more toward function than fashion. We do have RGB though, so there is still some bling to it.

Having a compact frame means you’re without much of the other function buttons a TKL or full keyboard can provide. Yet that doesn’t mean you don’t have access to those anymore. As with the original Falchion, some of the NX version’s keys have double outputs. With a flick of a button, you can transform the 1 to + keys to their function (fn) counterparts. You also have access to some media controls with the Q, W, E, R, T, Y, and U keys.

Of course, it’s still way easier to have outright access to these keys for ease of access. However, knowing you still have access to them despite the small and compact nature of the Falchion NX still puts you at ease. Couple that up with an innovative programmable side touch panel and it’ll feel like you’ve lost none of the functionality of a bigger keyboard.

Now, the Falchion NX is basically still the Falchion except for, well, that NX tag. ROG’s been pumping out keyboards now armed with their own proprietary switches, the ROG NX. We’ve had the pleasure of playing around with that from our previous time with the Flare II Animate and Claymore II. Suffice to say, if you’re very nitpicky with switches then maybe you can feel the difference between Cherry and NX. However, for me personally, they have little to no difference.

Blue NX is still tactile and I still don’t like linear switches like the Red NX but they are still quick and silent. Plus, the ROG Red NX switches in our review unit have short key travel, good actuation, and are as linear as it gets. I still did enjoy my typing experience despite the switches being reds. If you aren’t too particular with who made the switches then you’ll have no problem adjusting to ROG NX coming from any other brand.

I’m going to sound like a broken record here but as the Falchion NX is basically still the Falchion from last year, it means we still have a wired or wireless connection option. No Bluetooth here as we only have the standard RF 2.4GHz connection via a dongle. For your wired connection, you have USB Type-A (for your laptop/desktop) to Type-C (for the keyboard). I noticed little to no latency with the RF 2.4GHz, which is normally the case with this type of connection. It would have been nice to have had a Bluetooth option though.

A battery that lasts long and still talks to you

The ROG Falchion NX still maintains the great battery life of its Cherry MX counterpart. It also retains that visual representation of the remaining battery with its side lightbar. So, in my usage I got around 4 to 5 days of game time without the need to plug in, that’s with around an average of 8 to 12 hours of use. A bit below the 450-hour battery life claim but still one of the best longevity in the market. Charging doesn’t take that long either with just around 1 to 2 hours depending on if it’s in use or not. So all in all, you’ll be using this one for quite some time before even needing a juice-up. Especially, if you don’t use it as much as I did.

There really isn’t much to say about the ROG Falchion NX but that doesn’t mean it’s bad. It’s just that it provides all that you need from a keyboard while maintaining a lot of function despite its size. As its slogan did say “Compact, without compromise”. Technically, this is still the same good ol’ Falchion from last year, which is one of the best 65% options out there. It has a small and easy-to-carry frame, great battery life, and wireless connectivity for a reasonable Php 5,990 (~$120) price tag.

The only difference is in the keyboard switches, which if you aren’t that nitpicky isn’t much of a change. So really, you’ll still come to love and adore the ROG Falchion NX as quite frankly nothing has changed. If you’re a person looking for a 65% keyboard who doesn’t mind what switches their using, save for the type (blue, red, browns, etc.), then you can’t go wrong with either the original Falchion or this NX version.

Lastly for those looking to get the Falchion NX for free, ROG PH has an ongoing promotion you can enter right now through this link.