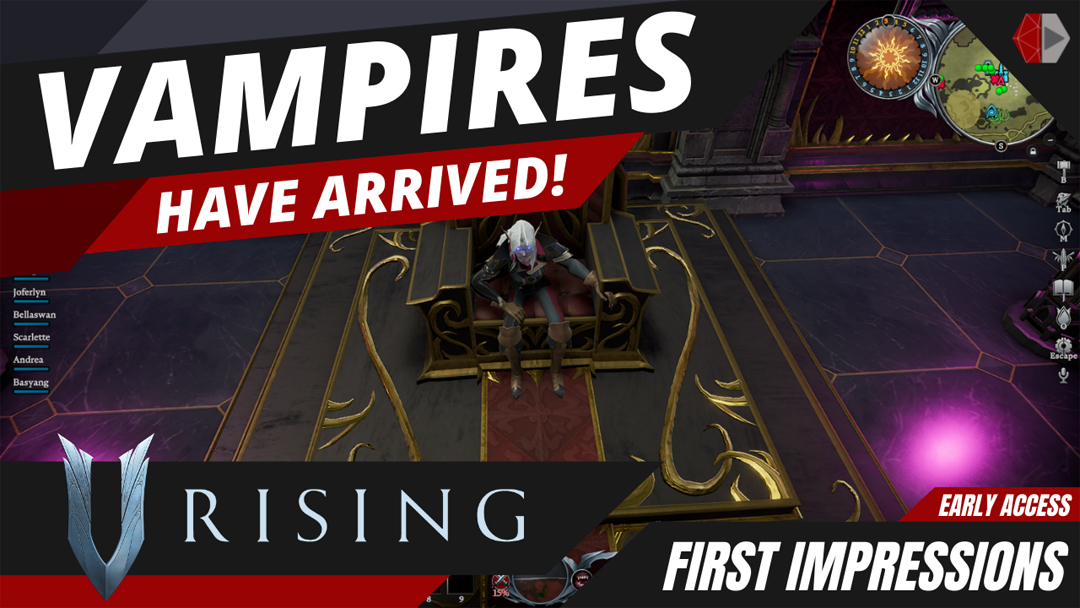 Survival games always exist in the gaming trend and it never dies down due to its core gameplay mechanics. Usually, this genre involves humans or other fictitious characters as the protagonists. However, V Rising made its memorable mark by making vampires as the star of the show. This did not fail hyping up its players who were waiting for its arrival. Now that it’s here, we got the chance to sink our teeth into this game. Check out what’s in store in this vampire survival game!

V Rising starts off with an opening cutscene that shows the domination of humans over vampires. This led the vampires to the brink of extinction but some managed to flee. They slept and waited for hundreds of years before finally waking up again from deep slumber. Your character starts with a weakened state trying to survive the harsh environment with a goal of rising back to your former glory.

V Rising In a Nutshell

The game has a mixture of various gameplay elements that we’ve seen in the genre. From what I’ve experienced, it has the elements from Albion, Rust, and Diablo. First, V Rising is a server-based game. Players can join or host a server via the developer’s official servers, player-dedicated servers, or a 3rd party hosted server like G-Portal.

There is also a game mode where you can privately host your own server and even play solo. Note that each server will only have 1 character per player. Importing other characters from other servers is not allowed. This makes a good feature given that it discourages people from bringing overpowered characters in a fairly new server.

Character creation in V Rising is decent giving players a good amount of variety to choose from. Given that it is a vampire-oriented game, the designs and look of each body part is on point and true to the theme. However, there’s nothing too spectacular here — just a regular character creation.

Overall, I like personally like the diversity of the characters in the game thanks to its numerous color combinations and hair styles. I took time in customizing my character and deciding which style I’d use in the game. In the end, I picked the common white-colored vampire look to make it more true to the tone of the traditional vampire concept.

After creating your character, you’ll immediately transfer to your coffin location. Instructions will tell you to wake up by pressing space and move using W, A, S, D. Movement, attack, and skills are straightforward and easy to follow. V Rising has a similar hub with Diablo which has labels on each hotbar to know what items/skills you’re using.

Movement is smooth and given that you are playing from a top-down view, you can see where you’re headed easily. You can also zoom in or rotate your camera for better field of vision. Overall, I don’t have much to say in this area given that they’ve done great in binding the default movement, camera, and controls in the game.

V Rising has an interesting combat system. Each weapon that you wield has different attack abilities that you can use. Making it diverse for players when choosing the most comfortable attack patterns in the game. Apart from that, there are also vampire powers and abilities. These are 5 categories for skills namely, Blood, Unholy, Illusion, Chaos, and Frost.

By default, you’ll have three available Blood abilities that you can use. The rest of those can be obtained by killing bosses and absorbing their V Blood. You will also have an item progression upon killing them so make sure to hunt them out. Vampire powers, on the other hand, comes with useful abilities such as transforming to a werewolf, controlling humans, and other more. Much like with abilities, these are attained by killing bosses as well.

What’s great in V Rising’s combat is it’s not plain and boring. You can actually kill stronger enemies using your dodging skills and knowledge of their attacks. Dodging in this game is *chef’s kiss*. It helps me as a player seeking more challenge in battling stronger enemies/bosses. The overall combat is smooth and it just doesn’t seem like an early access game for me.

Crafting in this game can be somewhat confusing given that there are a lot of structures dedicated for making things. There are a lot of things to take note here and if you haven’t placed them properly and orderly, it might take you a while to familiarize them. There are also different crafting stations that provide creation of low tier equipment and higher tier ones.

One interesting feature in this game is how you can build your own castle using the resources available around you. It’s only normal to have your own place if you are a vampire. You have to have a core structure called Castle Heart to keep things up and running. In Rust, you have to have a tool cupboard in your base to prevent your structure from decaying and getting destroyed. For V Rising, apart from upkeep, blood essence is needed to run the machineries that you’ll place in your territory. Enemies and animals drop blood essence when extracted or killed but you have other means to do so too as blood essence has its own crafting tree.

Building in this game is therapeutic due to proper presentation on how each building parts come together and form into your dream castle. Crafting-wise, resources are abundant but I still get confused on which one I need to access to craft certain items.

Apart from the aforementioned features, there are things that you need to know when playing V Rising. First, there is a Blood Pool which drains your HP if depletes to 0. This mechanics is the core survival element in this game. To fill your blood pool, you must consume the blood from living things such as rats and tainted/unsullied hearts. These don’t provide stats but sucking blood from wild animals and humans will give you various types of bonuses.

There are numerous blood types namely: Creature, Brute, Warrior, Rogue, Scholar, Worker, and many more. They provide various types of bonuses that will be helpful when fighting bosses and powerful players. Lastly, you can imprison other humans to practically have an infinite supply of blood with bonuses. We’ll discuss more of this in our full review soon.

V Rising is designed not only for PvE, but also for PvP. Clans exist in this game and those who are not within the same clan may attack other players. Not only that, they can also loot them, as well as raiding and destroying their castles. I like this kind of mechanic since I love the challenge of outsmarting other players using my skills.

Another interesting feature is the day/night cycle. Obviously, if you are a vampire, you’ll burn and take significant damage if exposed under direct sunlight. So the shade will be your best friend on day time. When night arrives, you can move freely anywhere which will be your staple adventuring time. There are also instances that the Blood Moon arises and this will boost your stats further.

Sink My Teeth or Swim Away?

Putting all of the aforementioned features of the game, V Rising is quite a well-established survival game. I personally could not believe that a game on an Early Access phase is already this well-built. Normally, I’d see frequent bugs and glitches but I barely had any during my 24 hours of total playtime.

Regardless of how solid this game has gotten, I still have some points for improvement. One would be the time it takes for your slaves to finish hunting an area. It takes a minimum of 2 real-time hours to a maximum of 24 real-time hours before finishing a single hunt. Not only that, the loot that your slave will get is quite lacking. I suggest to have a modifiable server settings to this so we can hunt more and frequently.

Next, some control binds are not within the bounds of my comfort zone. Interacting with crafting stations and cancelling them using the “escape” button opens the in-game menu. For me, this is quite intrusive as I can accidentally quit the game right there and then. Some of those are minor changes and doesn’t have much major effect in overall gameplay. Basically, they are more of quality of life (QoL) adjustments. I still look forward to new updates and QoL updates since it’s still only in its early access phase.

V Rising is a promising vampire survival game that anyone can enjoy. The Dice gang is still exploring the game and haven’t reached the end-game content yet due to its complexity and huge number of features. We’ll provide more details once our full review comes out in a few days so check that out! It is now available on Steam for Php 449.50 while its cosmetics bundle “Dracula Relics” and “Founder’s Pack: Eldest Bloodine” is priced at PHP 845.90.

What do you guys think? Let us know your thoughts in the comments below.

Save and Preserve Dying Cultures in Season