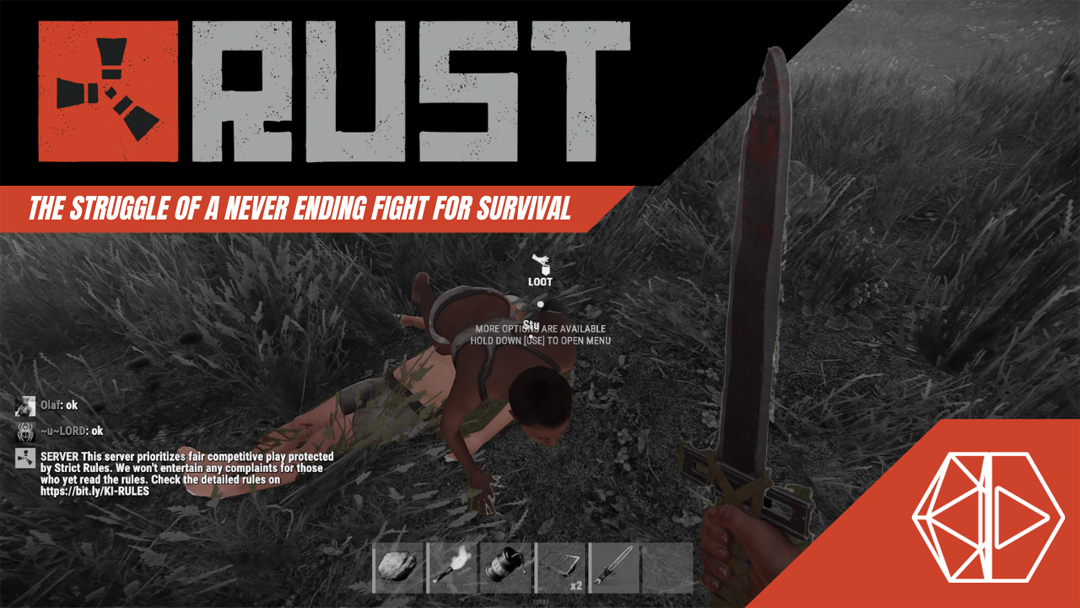 Have you ever felt the urge to get back to a game after resting for a few hours? Did you ever feel frustrated when something or someone kills you in a game and makes you want to take revenge on it or them? If your answer is yes, then Rust is for you. This game tests you to your limits as it brings immersiveness to a whole new level thanks to its gameplay and mechanics.

Released last 2013, Rust is an MMO first-person shooter survival game that explores an uncommon theme for online games. It features gameplay elements that some people might find very challenging and exhausting.

Start Of The Struggle

Rust relies on servers hosted by various groups, may it be official ones by devs or by the game community. Each server has randomly-generated maps that reset in a given timeframe. Players can go vanilla which is the standard game mode or they can go for modded maps. These maps are community-generated and allow you to explore a variety of modifications if you’ve gotten bored with vanilla. However, for this article, we’ll focus on vanilla maps so you’ll get the gist of the game easily.

Entering a server for the first time after opening an instance of the game will take a lot of time to completely render the whole map. In my experience, I’ve put the game in my SSD already and loading inside the server takes 5 or more minutes that can be a real drag if you’re itching to go in already. However, it’s quite satisfying once you get in since its graphics are relatively great given its age.

You’ll wake up on the seashore every time you spawn unless you have your spawn point set by placing a sleeping bag. Since this is a survival game, your starting task is to simply gather resources and gain a foothold in the server. Resources are available everywhere so you won’t find it hard to get basic necessities. Moreover, you’ll respawn with a rock as your starting gathering tool and a torch that you can use when night arrives.

Before we get into the juicy part of the game, it is important to discuss the things you have to be aware of. Maps in Rust are important because the terrains and environment are different throughout your playthrough. These are the things that you should be aware of:

It’s great if you’re the only one in the server gathering, but it’s hard if you’re coupled with hundreds of people doing the same things. You see, this game is initially a free-for-all map that specializes in player-vs-player (PVP) interaction. The fun and struggle begin here as you’ll have to use your quick wit in outplaying other players. Wood and Stone are your main priorities in this game when starting your adventure.

However, a good tip is to find loot boxes and destructible containers scattered across the map. Some of the loot crates involve tools that help give you a boost and advantage over other players. These include axes, paddles, chainsaws, flamethrowers, knives, and even guns. These can normally be found near monuments including safe zones so they’ll be your main source of materials in the game.

Death Is Your Bestfriend

You will die a lot in this game. When you die, you leave your body vulnerable and other players can loot you on the spot. This is where a player’s frustration develops and comes into play. The urge to rise up and come back will be your determination, but death will also leave you unmotivated. Rust is unforgiving when it comes to losing your progress. Make sure to not attach yourself too much to items and equipment lost in fights to last in the game.

Apart from dying and getting looted by players, the base that you’ll be building throughout your game has an upkeep mechanic. Every base has a Tool Cupboard or TC for short. This lets your base stand its ground without decaying and losing health over time. If you’re confused, let me explain briefly.

Each part of your building can be crafted using various resources such as wood, stone, metal fragments, and high-quality metals. When you craft a part, they have a certain amount of health that will decay over time. The only way to prevent this from decaying is by placing a TC and putting the resources that you used in placing your building parts. For example, if you’ve crafted a stone wall, you should have stones in your TC to maintain its health.

Another important part is raiding bases. It means that you can loot other players’ hard work by destroying building parts. You can achieve this by using various methods but the most effective one is by firing rockets from a rocket launcher or throwing C4s. Did I mention that once you log out, your body won’t disappear and will be in a state of sleeping only? Yeah, that’s right.

This is why building strategically is important in the game as it decides your future in the server. Getting offline raided is the most common occurrence so make sure to fortify your base before getting off in the game!

The Never Ending Struggle For Survival

My main advice for players who are new is to be patient and expect a lot of deaths due to other players or hostile animals roaming around. Always check the map and see where you can settle your base in, at the most advantageous area possible. You can never be complacent in your state as you should expect other people will always try to out-progress you.

Most Vanilla servers have a bi-weekly wipe which means that the map and your progress resets every two weeks. There will be blueprints, however, that you can research throughout the game that sticks in your character longer. There is also a Blueprint wipe but it normally occurs monthly which gives you a fresh start in the server.

The aforementioned elements in the game are what make Rust so interesting pushing you to keep on trying again and again. These things are also what breaks a player’s spirit and quit the game for a while. However, their masochistic characteristics normally take over making them want to start anew. I know this because I’m one of those players who jump from server to server trying to get the best start.

In Rust, you should always keep your guard up whether you’re playing in the game or not. Luckily, you can use Rust+ to help you monitor your whereabouts and base status even if you’re not playing. Overall, my experience in this game makes me want to improve more in terms of gunplay and building. I get new ideas every time I encounter players in a server, so do try interacting with some.

You can also talk to them using chat or voice comms which can potentially lead to friendships and alliances. Playing solo is hard but, there’s an option to team up with 7 other players for Vanilla servers. It’s always great to play with friends and other people because your progress will be faster. Faster progress means you’ll find better weapons, items, raid items, and resources that will set you apart from the others.

Rust is a gem for me and after almost a decade, the player base and community are still very active. Recently, there was a Twitch Rivals tournament in Rust that involved various YouTubers and Streamers. This is also one of the factors why more people want to try out the game.

Lastly, I recommend people to play this game if they are down with challenging themselves. This involves a lot of skill and strategical thinking so make sure to familiarize the mechanics first. If you’re used to gathering, killing enemies, and doing monuments, you’re already set to dominate the server for the wipe.

What do you guys think? Let me know what you think of Rust! If ever you want to play with me, just hit me up in the comments section!

Tomb Raider, Lara Croft and the Temple of Osiris are free to get on Steam until March 24th