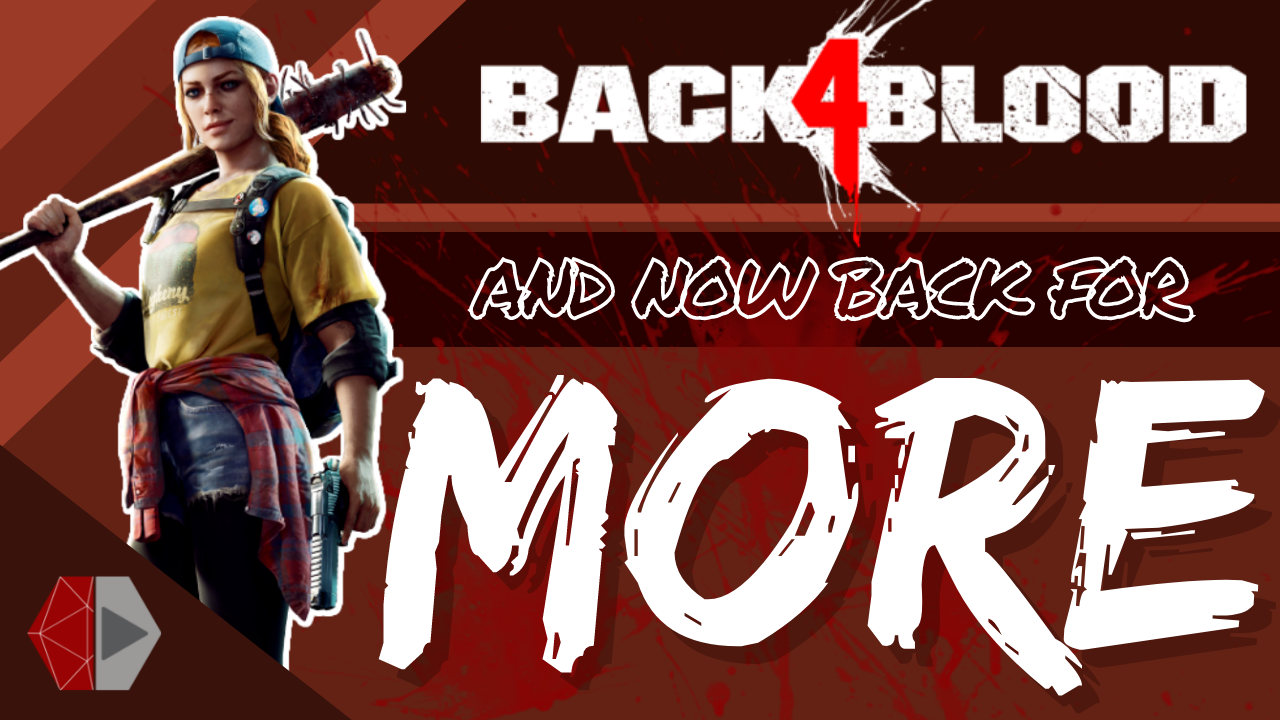 With the hit success of Left 4 Dead and Left 4 Dead 2, we expected a third installment. However, after years of waiting and potential teasers, nothing came. That is until Turtle Rock Studios decided to work on a spiritual successor in Back 4 Blood. So Let’s see what differentiates this from its predecessor.

Note: This also includes the latest expansion of the game: Tunnels of Terror

WHAT STARTED THE END OF THE WORLD?

Before I head on to the gameplay mechanics, how about a bit of lore first? Unlike the Green Flu in Left 4 Dead, we are faced with parasitic worms. Found in Quebec, Canada, The fictional Devil worm found its way into the hand of scientists. Trying to understand and study the worm started the apocalypse in this game.

The worm takes over the body and mind of the host in hopes of spreading itself to other hosts. So this time we aren’t really against flesh-eating zombies, but rather parasitic organisms. The lore already differentiates the story and history of the two games.

Unlike the typical zombies or Zs, the enemies in Back 4 Blood are called the Ridden. Host to the parasitic devil worms whose main goal is to spread it to every living being. The Ridden are anything but easy in this game as they are affected by different effects. This effect can either be a boost to their damage, speed, or they may even be armored.

To add to that are the evolved Ridden which has specialized mutations that can cause more problems for your team. Some even have different variants. Below is a list of the evolved.

With their four arms, they are very agile and can blend in well with normal ridden. They have the ability to leap which makes shooting them down a lot harder. They also possess a fast charging ranged attack which can slow down or even pin cleaners.

Bloated ridden mutations whose main goal is to get near any survivor to attack or cause damage upon death. This mutation can vomit acid that damages and attracts other ridden to survivors. They also explode upon death, so be careful on cleaning one at point-blank range.

As the name suggests, these are tall variants with one of their arms heavily mutated. Even though they look fragile, they can tank a lot of bullets before succumbing to them. Their attacks can either grip a survivor or push back survivors to separate them.

Mutations with protruded necks. Make sure that you have enough ammo or coordinate with a teammate to kill these. They will call a swarm of ridden when startled or when you fail to kill them. At times a single rifle clip won’t be enough to take one of these things down.

One of the boss-like mutations, they have a thick hide that acts as their armor. It is one of the four ridden which actually has a health bar when you fight it. They can leap at a survivor and are agile for their size. Unlike any boss, they have visible weak spots (orange orbs) on their bodies.

Although not really aggressive, these boss-like mutations can one hit anyone. They will go after whoever attacks or startles it and will try to devour them. On a successful devour, it will try to run away by digging a tunnel. The only way to get out of its grasp is to have it sustain enough damage or by having a stun gun.

A big bad boss of the game, the massive size alone is enough to warn you to not take it one on one. With sweeping attacks and huge ranged blobs, you should be wary and ready when fighting one. It will tunnel out once at 50% health but expect to fight it before the round ends.

The game’s final boss which has 3 different stages or forms. Each form is harder to beat which makes it a bit more fun than the typical ridden. Unlike the other mutations, this only spawns in the final act of the game.

We play as the Cleaners, a group of immune survivors who are tasked with getting rid of the Ridden. Each Cleaner has their own bonus or buff that can benefit themselves or their team. So let’s check out each cleaner and what they have to offer.

Assigned medic or support of the group. Doc can heal up any member of the team once per round (without the need of items). Healing with items can also give you or your team bonus health. Just make sure that when you’re playing Doc, you would remember to use her heals.

The youngest of the team, a bit inexperienced, and yet proves himself loyal. Although nervous and chatty, this Cleaner can and has managed to get himself out of sticky situations. With his abilities and traits, he can be your party’s scout

The team’s doomsday prepper. Meticulous and always ready for whatever comes. Having him on the team means more room for ammo and offensive tools.

Armed with a baseball bat, Holly will run down and duke it out with any Ridden that gets in her way. Her traits and abilities make her the tank of the group.

A marksman who could stack up damage per kill. Pretty effective with sniper rifles and well any other gun. Efficient in holding down any position as well.

A blunt personality with a keen eye for any form of hazard. Karlee may look like a troublemaker, but she looks after her team.

Because we all need a mom during the end of the world right? Christine Tuttle or known as Mom to her peers is another support type of character. She could easily get her team’s morale up and their revives faster.

A military man that brings the boom to his enemies. He could easily spot danger and makes sure that they are well dealt with.

The refugee who rose up to being a restaurateur. Heng had it rough so he aims to provide for his community. He gives off valuable intel regarding tools and parts that will help the team survive.

When the going gets tough, Sharice gets going. Being a firefighter before the apocalypse, she knows how to make a bad situation better. She could turn her enemy’s armor into your armor to use.

You know what’s better than a linear story-driven zombie shooter game? Well, the randomness of it all! That is how it has been in a lot of Zombie shooters, wherein every stage has random contents for you to uncover. However, in Back 4 Blood this randomness is expressed in card draws.

A set of cards are drawn at every start of the round, the first deck is for what danger and challenges await. The second draw is for the player to choose the perk they want to go with at the start of every round. If you run out of deck cards you can choose basic cards that affect ammo, health, stamina, or your money.

You get your cards from this shop, these cards and other peripherals are however unlocked in an orderly manner. You can unlock them for supply points which are given at the end of every round. The higher the difficulty the more supply points you gain per round.

The deck building in this game is pretty straightforward, there are no restrictions. As long as you own the card, then you can put it in a 15-card deck. So you could build a specific deck for any character you want to play in Back 4 Blood. Just choose the right deck at the start, since you cannot change it in the middle of the game. However, upon joining an existing game, you can change your deck at the beginning of a new level.

Another feature that sets apart Back 4 Blood is the ability to customize in-game. From cosmetic purposes to the weapons that you carry. You could really have the setup you want not just with your perks, but also with your weapons.

It doesn’t offer any combat advantage, but it does make your weapon look bad-ass. Weapon cosmetics could affect how your weapon looks, to how it sounds when it is being shot. The skins can be purchased from the cash shop or from supply lines.

You also have the ability to dress up your cleaner. These can range from full sets, or clothing parts (head, body, bottom). They do not offer any tactical advantage, but they do make you look good. The skins can be purchased from the cash shop or from supply lines.

In every run you could change up your primary and secondary weapon, however, you have to observe their attachments. Weapon attachments improve the weapon’s overall performance. They can be gathered from the field or from shops. Just know that some weapons only allow 2-3 attachments instead of the maximum of 4. What you attach is up to you and your playstyle.

The latest expansion of Back 4 Blood. The Tunnels of Terror offers the players brand new supply line cosmetics and cards. But at the cost of dangerous explorations and terrors. The tunnels are home to far more aggressive and improved breed of Ridden. New Challenges and dangers await you here.

Starting a game here requires someone in your party to have the DLC purchased.  Once in the tunnels, you are given far harder corruption cards to deal with. You are however given ominous chests that give damage over time in exchange for rare to legendary gear. Along with it are two new playable characters Heng and Sharice.

So what are you waiting for? Grab a copy of Back 4 Blood on PC (Steam, Epic Game Store), PS. Better yet get yourself an Xbox Gamepass and enjoy this title and others for $1 on your first month.

Mario and the Rabbids return in Mario + Rabbids Sparks of Hope