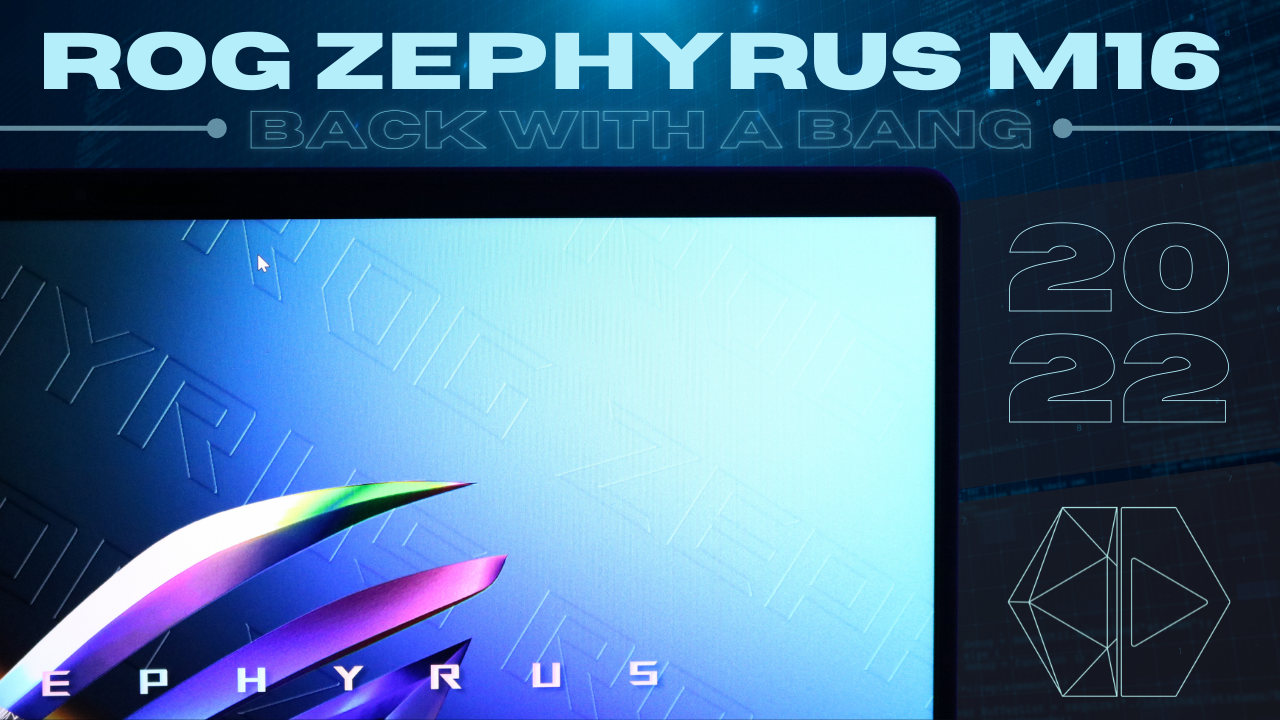 The Zephyrus M16 got some much-needed love from ROG this 2022, receiving upgrades across the board. The already beautiful and powerful thin and light is back with the latest kicks the market has to offer. We’ve actually played around with it a bit before but now we’re ready to give you the full rundown. Read on then for our ROG Zephyrus M16 (2022) review.

The Zephyrus M16 (2022) generally remains unchanged externally. We still have a relatively thin, light, and small frame with the same aesthetics as last year. The Dot Matrix display is still here too, glistening and glowing under the right lighting conditions. Much of the same material we had last year is also what’s in this year’s model. Making it one tough and premium feeling cookie. After all, this is a refresh so mostly only the internals undertook big changes. If you enjoyed how the previous model looked, you’ll still enjoy this one. However, this also means the problems we had with the last one are still present with the new one.

While without a doubt the Zephyrus M16 is a beautiful-looking laptop, it does have some shortcomings. One of those is being one hell of a fingerprint and smudge magnet. It can quickly become a nuisance from time to time as cleaning requires a damp microfiber. Dry wiping with other materials is not enough, sometimes it still isn’t even with a microfiber. So, get ready for some good wiping. The other problem is a design approach by ROG or any other brand which I personally do not like. That is overlapping the display lid with the rear exhausts.

Whatever the reason behind doing this kind of design, whether to allow the laptop hinge more flexibility or give it the ability to lie flat, it doesn’t change the fact that it will do damage to the screen in the long run. For the case of the M16, this was done so you can push the display lid up to 180 degrees. Yet, I do not see any need for any laptop to lie fully flat on the table. No one ever uses laptops this way, a good 75 to 90-degree hinge angle would’ve sufficed for most users.

It may be okay for a consumer or business laptop where usage is only on the light side. However, on a gaming laptop where the exhaust is mostly roaring all the time, this type of lid design is dangerous. True enough during our time with the M16, we had instances when the lower part of the display became really hot to the touch. If not for those two shortcomings, the M16’s design and build would’ve been perfect.

Now, this is where things get really interesting for the Zephyrus M16. Last year’s model had a good display providing high refresh rate and a nice visual experience. However, the 2022 M16 takes it up a notch with ROG’s latest Nebula Display feature. It may sound gimmicky but it does the job quite well. So well, I immediately noticed how clear, vibrant, and alive the display is when I first fired the device up. Even more so as our review model has a QHD display, making everything crispier. The brightness though can be overwhelming at times so I had to tone it down a bit.

Yet, overall this is one hell of a great display, especially when used for gaming and media consumption. Games with great environments or emphasis on their worlds really spring to life and at times I just found myself wandering around enjoying the view from the Nebula display. It’s also a real treat for content creators as editing photos and videos was a blast thanks to its color accuracy and reproduction. As for audio, we have the standard laptop speakers with support from Dolby Atmos. ROG did include a bit more oomph to it. It’s not otherworldly but definitely above average plus we have the two-way noise-canceling feature of ASUS.

Nothing much changed from last year’s keyboard and trackpad. We still have a chiclet-style TKL (tenkeyless) layout here with good feedback and travel plus RGB bling. I did have to adjust personally since the keyboard is a little more compact than on my daily driver, the Lenovo Legion 5 Pro. Still, though, I had a very pleasant typing experience plus you still get those extra media keys and ROG Armoury crate quick-fire button. As for the trackpad, we have a large smooth glass pad making gestures and swipes easy to do. Despite its size, you won’t have that much of a problem accidentally swiping it with your pal as it still has enough separation from the keyboard.

Now, despite the Zephyrus M16’s relatively compact and small frame, ROG was able to cramp enough ports to make your life easier. It even has an extra USB 3.2 Gen2 Type-A port compared to last year’s model. On the right, we have a microSD card reader and that extra USB 3.2 Gen 2 Type-A port. The card reader was a real welcome sight. Especially for content creators like me as I can easily transfer images and videos with it.

It may not be a full SD card slot but any SD card slot is a plus in my book. Then on the left, you have two USB Type-C ports, of which one is a USB 3.2 Gen 2 with display port and power delivery and the other a Thunderbolt 4. Joining those two is the other USB 3.2 Gen 2 Type-A port, an HDMI 2.0b port, an RJ45 Ethernet port, and a 3.5mm combo audio port. For connections, we have the new standard Bluetooth 5.2 and WiFi 6E.

Powering the device is Intel’s very own Core i9-2900H paired with Nvidia’s RTX 3070 Ti and 32GB of RAM. This setup screams power as we have some high-end specs the current market has to offer. The Core i9 is one hell of a beast able to handle any and all heavy CPU workload you throw at it. So much so that our real-world render test of a 2-hour long video took only around 38 minutes. That’s a mighty impressive turnaround time, as for synthetic tests well it got a score of 6,187 in Cinebench 20. Generally though we’ve had smooth sailing on any CPU-centric activity be it light or heavy.

For our other synthetic benchmarks, as expected we got some pretty high scores on both 3DMark and Unigine. Translating that to gaming, we see much of the same stellar performance. Triple-A games at ultra sit comfortably on good average frame rates save for Total War: Warhammer III but that’s partly because of the number of assets it loads during large-scale combat.

This is on QHD resolution too, so reducing it to FHD or 1080p will provide even better performance. Although, you can very much comfortably play at QHD and take advantage of that beautiful Nebula display. Overall, we’ve had a great experience with the M16 when it comes to heavy activities whether it be gaming or content creation. So, there’s really not much to say except this one is a true beast.

ROG did no bold claims about the M16’s battery life. Even so, it did perform quite admirably on this front lasting around 7 hours and 3 mins during our video loop test (1080p video with 50% screen brightness and audio with earphones plugged). During our own day-to-day usage of it performing light to medium tasks, it lasts about 3 to 5 hours give or take. Not too shabby in my books as you can more than carry it to a coffee shop for a good half-day of usage before needing to plug or head home. As for upgradability, you get 2x m.2 SSD slots and 1 extra DDR5 DIMM slot.

Our unit came with just a single 1TB SSD on there and with the storage needs of today that is a bit lacking. So, it’s nice to know that we have 2 slots for storage and I highly advise you fill that one up. Sadly, the other DIMM slot has soldered memory on it, and depending on your variant this is either 8GB or 16GB. In our review unit, we have a 16GB soldered and it came with another 16GB extra for 32GB in dual channel. If you happen to grab a model with just the 8GB on it then it may be a little bit tricky for you, so be very careful when choosing your M16.

Alright, ROG did a lot with regards to cooling for the M16. We have their intelligent cooling feature, liquid metal compound, Arc Flow fans, and six heat pipes. Suffice to say, ROG did a really good job keeping the device cool under most circumstances. During our thermal tests with Prime95 for the CPU and Furmark for the GPU, the laptop reached about 88° and 85° max, respectively. While those numbers aren’t all that impressive we do have to consider that this is a very compact device. So temps at under 90 are still good in my books. Plus these were stress tests and in real-world instances, the M16 did perform cool under load. During prolonged gaming, it only peaked at around 75° for the CPU and 63° for the GPU.

Now, those are impressive numbers for such a thin laptop. However, while it maintains control of temperatures the same can’t be said for fan noise. The M16 truly roars and is as loud as a plane taking off. Not even its speakers can drown out the fans when they are in full blast. So, when you are playing or doing heavy work I highly recommend using earphones or headsets. Oh and quiet mode doesn’t help, I even experienced the fans blasting on idle with no heavy app running. This may be improved with some software tweaks or updates down the road.

The Zephyrus M16 is sure to make a splash with its return this year. It has great performance, a truly amazing screen, and a compact body that’s easy to carry around. Plus, it doesn’t look overly aggressive but provides enough aesthetics to still look appealing. However, it does have a few quirks that can be deal-breakers. First, is the fingerprint and smudge magnet chassis which is a challenge to even clean. The other is one that is a personal deal-breaker and that’s the exhaust design. Hot air from the rear blows straight to the bottom of the display. With the fans roaring strongly all the time too this will not bode well in the long run. If you can get past those quirks though you’ll be greeted with a monstrous device that can game at ultra settings in QHD and provide enough visual eye candy with its Nebula display.

The Zephyrus M16 2022 may not have that much of a difference from the previous model. Yet the changes it brought with it are enough to be considered a good upgrade from last year’s model. However, that compact body, great performance, and beautiful display comes at a high cost. Anyone looking to snag this bad boy will have to shell out at least Php 139.995 (~$2,670) for the base model with an i7. For our review unit, you’re gonna have to kick it up to a budget of Php 169,995 (~$3,242). For that price, I can guarantee you can find a more affordable device with at least the same performance or a high-end desktop. Either way, with its upgrades and price tag the M16 really did come back to 2022 with a huge bang.