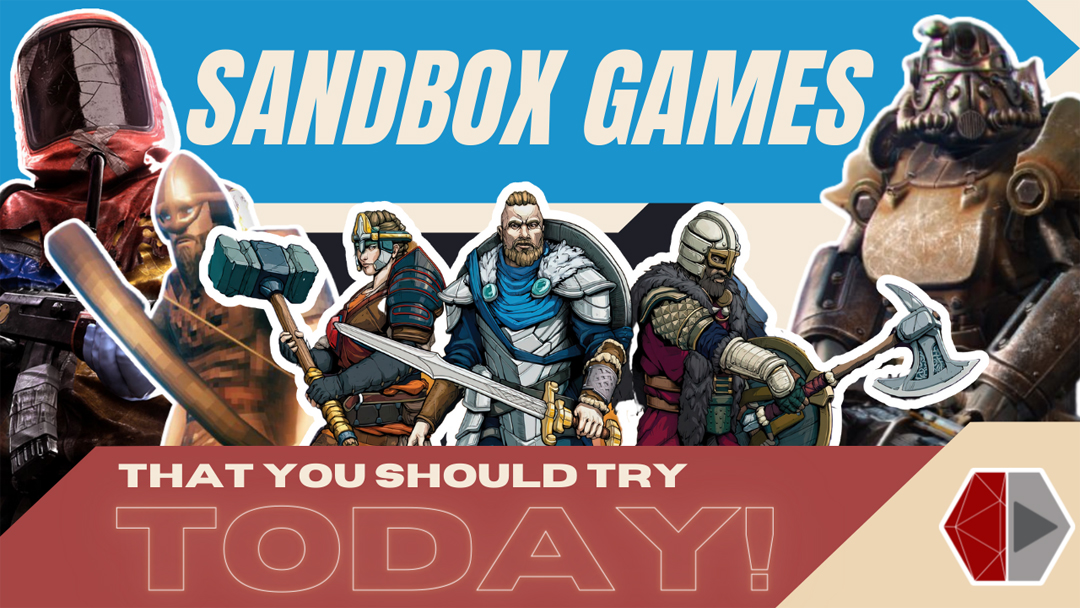 In the world of video games, lots of genres are waiting to be discovered but some will inevitably make their way to you no matter what you do. Sandbox games are one of those things that almost every gamer will eventually play. This is because the chance of you feeling the satisfaction due to your game progression is very high. Here are some games that I would personally recommend to you if you want to have a fulfilling moment in playing games. Let’s begin!

Note: Sandbox Games mainly give players the freedom to do things and explore the environment without much restrictions. Essentially, these are “choose-your-own-adventure” games that potentially bring enjoyment and satisfaction to players of all ages.

Allow me to put this game at the top of my list. Whether we like it or not, Minecraft will always be one of the games that we’ve played at least once in our lives. Since its release in 2011, young and old players alike tried this pixel game due to the possibilities and adventures you can do. Each world creation generates different starting areas, surroundings, resources, and enemies.

The main attraction of Minecraft is how broad you can craft and create different items from the materials that you get around you. Apart from that, there are three worlds that you can explore which will lead you to the end game. Lastly, the modding community is over the top providing various new features and gameplay for you to try. I recommend this to be your first sandbox game to know and feel what it’s like to have fun regardless of your age.

These two games are in one spot since I’m showcasing their core gameplay elements. The vanilla Don’t Starve allows you to play the game only in solo mode while Don’t Starve Together lets you play with friends. It features players choosing different starting characters containing different skillsets and abilities. The core objective of players is to survive for as long as they can.

Players can use the resources scattered everywhere to build and craft items or tools to help them survive through the night. Make sure to monitor your sanity, hunger, and warmth as these will be the factors that will affect your survivability. Personally, I’d recommend this to play with friends to increase the rate of your survival. Defeating enemies and gathering resources will be your main tasks so make sure to coordinate with your friends!

One of my most played Sandbox games is Terraria. I don’t know about you but Pixel Games really capture my interest regardless of what genre it may be. This is a 2D adventure game where everyone will start from scratch. Much like minecraft, you’ll craft tools and items and construct buildings based on the resources you gather. The main difference, however, is that this is a PvE (Player vs Environment) oriented game. Moreover, You can only progress with your randomly generated world by killing bosses in the game and unlocking new materials to be gathered.

Back in my college days, my housemates and I played Terraria almost 24/7. If we finished one playthrough, we’ll challenge ourselves more by generating a world in a harder difficulty. Years after, we found out that there is a dedicated modding community available on Steam. This made us play the game again with a different goal in mind — trying out to finish Terraria with different mods.

Lastly, Terraria and Don’t Starve developers recently collaborated together by bringing one of the bosses in each of their games. Pretty cool collab indeed!

The youngest sandbox game on this list to come out is Core Keeper. It’s still in its early access phase but it offers a lot of hours of playtime already. One of its main features is you’re gonna do everything underground. Depending on your class, you’ll get an advantage on some skills and equipment. Regardless, you can get them as you level your abilities in the long run. The catch here is that you have to execute the tasks repeatedly to level that specific skill.

Overall, Core Keeper makes the experience better when playing with friends. You can also delegate tasks like we did: a resource gatherer, farmer, builder, fisherman, and adventurer. To know more about this game, read our in-depth look here.

Next on our sandbox games list is Tribes of Midgard. Much like with the aforementioned games in this list, this makes you gather resources, fight and loot enemies, upgrade equipment, and craft new items and tools. The twist in this game is it is also a hero/tower defense where you need to defend your town from invading enemies in the game. However, the main game mode also forces players to finish the instants in a set amount of days or be totally overrun by a nonstop wave of monsters and giants.

Each game session generates a world that you and your friends can explore. As a PvE-centric game, the combat here is quite nice. Choose among a good selection of classes when you reach a certain level. Then use your newfound abilities and skills to defeat monsters and bosses. There is also a dodge mechanism where you can flawlessly defeat enemies all the way.

One unique sandbox game on this list is Raft. This game revolves around players surviving on the sea by moving their raft and mainly gathering floating resources. These materials will let them expand their raft and craft more tools to help them get by. Since this is an open-world game, you’re quite literally wandering over a very large body of water.

There’s a story to the game to bring more depth and flavor. Try to gather clues and information on the islands that are scattered everywhere. There’s also PvE in the game that allows you to fight sharks, bears, and many more. I suggest playing this with friends but if you’re into wandering the sea alone, go ahead and don’t be shy.

Another one on this list is Valheim. This sandbox game lets us explore the world of Norse mythology. Your task is to basically — yes, you thought correctly. If you’ve noticed, most games on the list need you to gather resources, craft tools, items, and build things. Much like with Core Keeper, however, character skills and abilities will depend on how you play the game.

You can increase each one of them by repeatedly doing them such as chopping trees, running, punching anything with your bare hands, and more. Valheim is quite hard if you’re new to this game. Fighting monsters is a real challenge since you will have to rely on your dodging skills to mitigate the damage that you’ll receive especially from bosses.

The only dedicated single-player game on this list is Fallout 4. I included this role-playing game because you can practically do anything without a care in the world. What story? You can go straight and kill everything and everyone you see. That’s how much of a sandbox this game is, at least in my perspective. Take note that this is a first-person shooter game so your skills with a gun are your key to victory. Or, just simply talk your way out of everything and persuade people to practically finish the game.

Make sure to savor every moment in this game because it’s overall good in terms of story, gameplay, and game-breaking bugs.

Rust is one of those sandbox games not for people who cannot commit and invest time in playing. This is an MMO (Massively Multiplayer Online) game that brings players in different servers together. Do not be deceived as this is not your ordinary survival sandbox game since it requires you to constantly check on your character. Craft items, tools, and weapons using the resources that you gather and build structures that will be your (hopefully) safe haven.

The catch in this game is that when you log out, your character stays in the game’s server. Your character will just sleep where you left him/her off and this means that other online players can basically kill and loot your body while you’re not around. What’s exciting is that there is building durability for your structures and if you don’t provide enough resources in your tool cupboard (storage for resources to provide upkeep to your place), your building will decay. Ultimately, everything that you’ve gathered, grinded, and crafter will be left vulnerable to everyone who happens to roam around your area. Try it and see how long you can get without being raided at least once.

There you have it! These sandbox games will definitely make you want to play nonstop or if you can’t afford that, maybe for a few hours straight. What do you guys think? If you have more suggestions, let us know in the comments section below.

Langrisser I & II Remake is finally getting a Western release