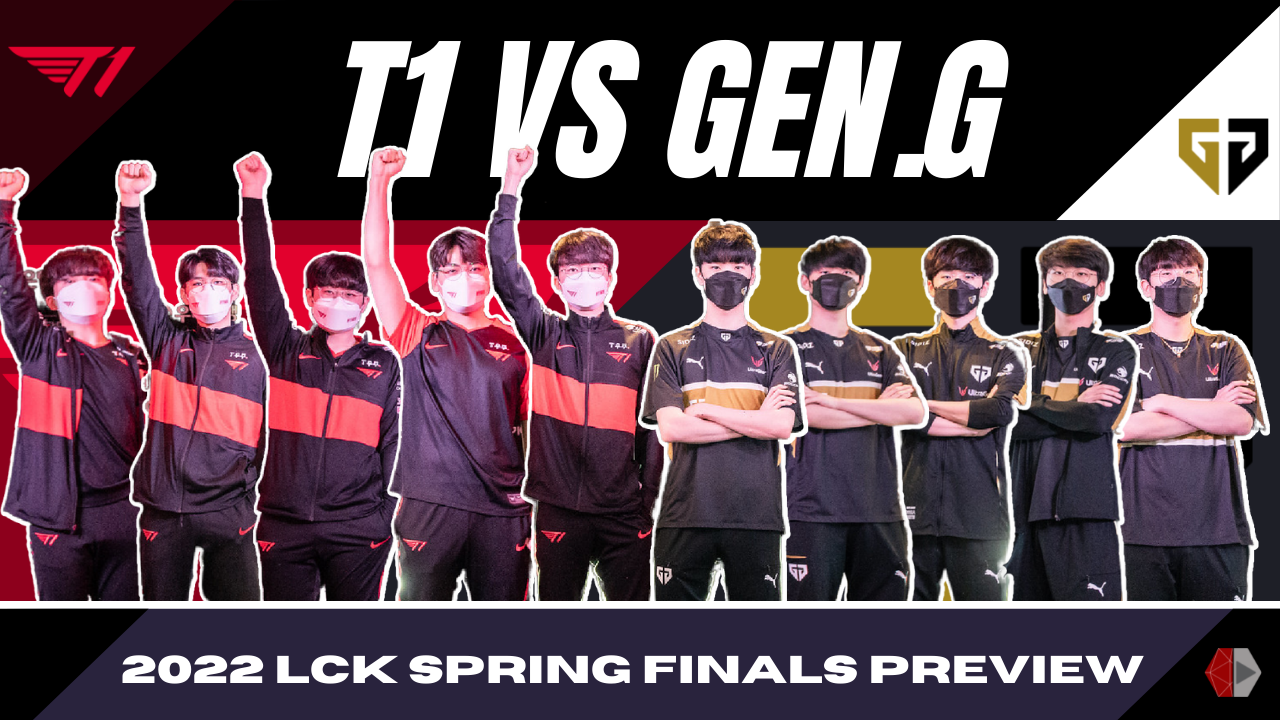 It’s T1 vs Gen.G for the 2022 LoL Champions Korea (LCK) spring title! Despite a regular season full of miracle runs and upsets, almost everyone expected these two teams to meet in the finals. There’s a lot going on between these two teams, so here’s a preview of the finals match between T1 and Gen.G.

T1 lives in the shadow of its past achievements. Back when they were SKT, they won three world championships, two MSI titles, and eight LCK trophies. After their rebrand to T1, they had a semi-finals appearance at worlds and one LCK trophy. But this split, T1 did what SKT could never accomplish: a perfect, 18-0, regular season.

At the helm of T1 lies team captain and mid laner, Lee “Faker” Sang-hyeok. As a key member of both SKT and T1, Faker has continuously struggled to live up to his previous accolades. However, this season saw him return to form. He extended his career record of 72 unique champions played with picks like Kai’sa and Veigar, as well as delivering T1 plenty of crucial wins with his impressive outplays and clutch team fighting.

Faker’s not alone, though, he has a team of young players who have quickly become world-beaters, in their own right. For instance, AD carry Lee “Gumayusi” Min-yeong and support Ryu “Keria” Min-seok have established themselves as the best bot lane in Korea. Their jungler, Moon “Oner” Hyeon-joon also stood out this season for his exceptional gank timing and Lee Sin mechanics.

The biggest revelation from T1’s 2022 roster is rookie top laner Choi “Zeus” Woo-je. Zeus shocked the competition in his first full split on the starting roster. So far, he has proven himself to be an extremely flexible player; carrying games with Jayce, turning team fights around with Gnar, and playing weakside with Gragas.

Additionally, all T1 players, barring Oner, were part of the 1st LCK all-pro team with Keria winning regular-season MVP. Currently, many fans and analysts see T1 as a shoo-in for the championship. Perhaps this could be the season when T1 claims their tenth LCK title and, later on, surpasses the legacy of SKT.

While T1 has failed to live up to past achievements, Gen.G doesn’t have that many achievements, to begin with. Despite winning the 2017 world championship, the org has failed to claim an LCK title for the past eight years. In a bid to turn things around, Gen.G built a superteam over the 2022 offseason.

Longtime Gen.G AD carry Park “Ruler” Jae-hyuk is the focal point of this roster. All previous iterations of Gen.G played around his pristine mechanics and team fight positioning. Despite becoming the 2017 worlds finals MVP, Ruler is yet to win a domestic championship.

Flanking Ruler are other gifted players who haven’t achieved as much domestic success as they had hoped for. In particular, their mid laner, Jeong “Chovy” Ji-hoon, is known for his ability to get CS leads even in losing mid-lane matchups. Chovy’s former Griffin teammates, top laner Choi “Doran” Hyeon-joon and support Son “Lehends” Si-woo, also joined the team.

Finally, Gen.G’s roster is rounded out by jungler Wang “Peanut” Ho-han. The veteran jungler has played for some of LoL’s most successful organizations like the ROX Tigers and SKT. He’s also the only person on the starting lineup that has won an LCK championship.

In the regular season, Gen.G established themselves as the clear second-best team in the LCK. It’s certainly going to be an uphill battle, but there’s still hope that Ruler and co. can claim their first LCK title.

Road to the Finals

T1 (18-0) and Gen.G (15-3) secured the 1st and 2nd seeds, respectively, from the regular season. This meant that they were directly seeded into the semi-finals, with T1 selecting their opponent from the quarter-final winners. For their matches, T1 opted to face the Kwangdong Freecs (KDF) while Gen.G had to play against defending LCK champions, Damwon Kia (DK).

The T1 vs KDF series was an absolute stomp, an easy 3-0 for T1. KDF found themselves completely outclassed in each role, with Zeus even beating Kwangdong’s well-respected veteran top laner, Kim “Kiin” Gi-in. The series even ended in around 76 minutes- the fastest in LCK history.

On the other hand, Gen.G vs DK was a much closer affair, with Gen.G winning the series 3-2. After several back-and-forth games and DK jungler Kim “Canyon” Geon-bu terrorizing the map, Gen.G finally pulled it together to win the series. They even overcame a 10k gold deficit in the last game, a testament to their fighting spirit and strong mental fortitude. (I highly encourage you to watch the whole series, it’s an absolute banger!)

Interestingly, we’ve never seen a T1 vs Gen.G match with their full rosters. LCK covid restrictions meant that Gen.G had to play with substitutes for their matches against T1 when players like Ruler and Peanut tested positive for Covid. Despite this, T1 still comes in as the heavy favorite against Gen.G

It’s the king of the mid-lane against the heir apparent. Faker and Chovy have similar champion pools and are both integral to the success of their teams. While Chovy’s mechanical ability is better, Faker’s game sense and in-game leadership remain unmatched. All in all, this makes the mid-lane matchup the one to watch in the finals.

Keria is, without a doubt, the best support in the LCK. He’s the first support player to become regular season MVP, and his playmaking ability and mechanics are unparalleled in Korea. But Lehends is a close second with pocket picks up his sleeve: Singed and Shen, to name a few. With the support role dictating a team’s early game, the Keria vs Lehends showdown should be exciting to watch.

Can T1 claim their record-breaking tenth LCK title or will Gen.G be able to win their first?

The T1 vs Gen.G match for the LCK 2022 spring trophy is set to take place on April 2, 4:00 pm. Additionally, the finals will be held at KINTEX in Goyang, South Korea in front of a live audience. If you can’t make it to Goyang, you can watch the finals live on the LCK twitch channel.

For updates on the latest LCK action and everything gaming, don’t forget to follow us at Dice & D-pads.

Goodies you can buy at Retro Gaming Expo