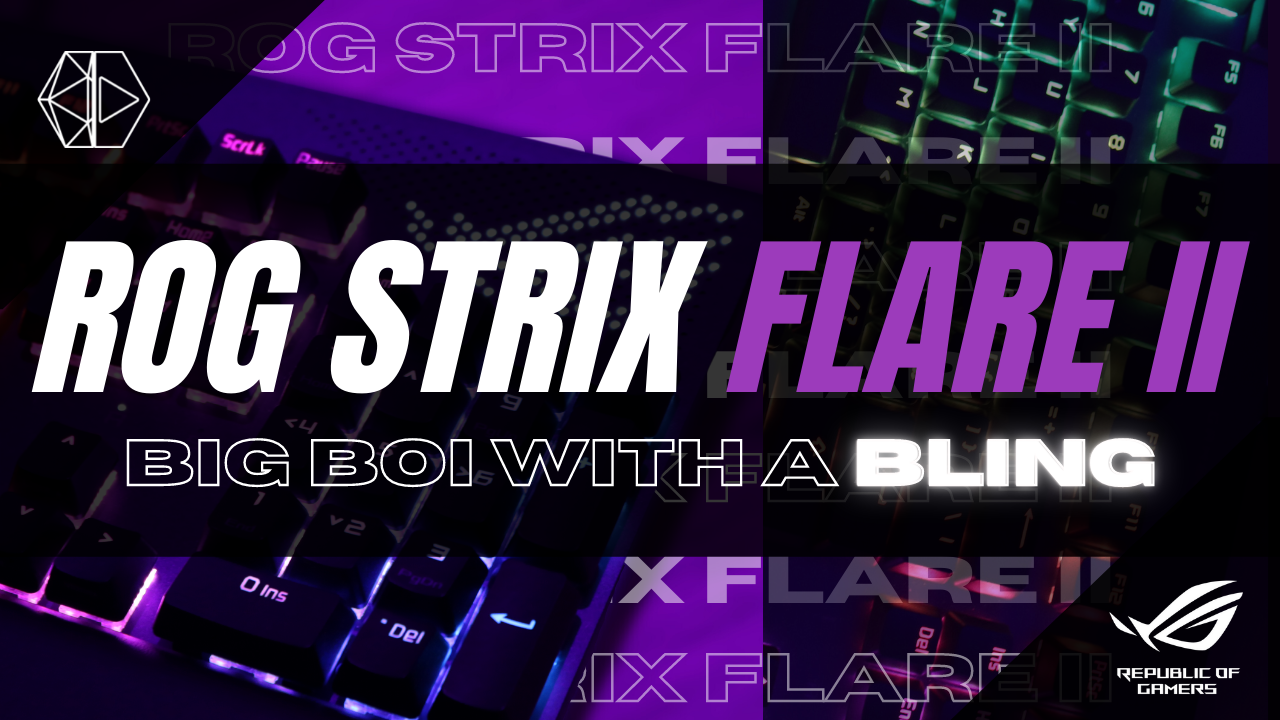 The ROG Strix Flare II Animate is a full keyboard with robust features and bling!

A full-on keyboard with a bling

Unlike some of the other entries into the Strix keyboard line-up the Flare II Animate, despite the flashy name, isn’t overly aggressive with its design. You have a simple full keyboard layout with just some extras on top. The only real bling you have, apart from the shining RGB lights, is the AniMe Matrix display. Situated on the top right of the board. The display, much like the ones you find on ROG laptops, is fully customizable.

Not only that it also offers even more by showing system information, audio visuals, and system indicators (next, pause, play, etc.). So it’s not entirely just bling, it provides some functionality. Apart from those, you have a subtle yet big keyboard. I personally only use TKL (tenkeyless) keyboards or smaller but that’s because my space is limited. Despite its size though, the Flare II Animate is not overly heavy. You can still easily tuck it away and bring it with you. Provided you have the luggage space.

Speaking of durability what you have for your keycaps here are double-shot PBT. Meaning, you have sturdier keys with more texture. This actually allows for speedier typing as you can easily grip the textured keycaps.

For wireless enthusiasts out there, sorry to disappoint. The ROG Strix Flare II Animate is wired only, perhaps because of the AniMe Matrix Display? Either way, you’re going to have to do some cable management with this one. More so, because its cable is thicc and we really mean thicc. That thickness though makes the cable sturdier than most. However, the size of the cable isn’t your only problem, you also have two USB connectors to deal with.

The first of the connectors is the one that’ll supply the power to the entire board. It’s what’ll make everything tick, from your media keys, to the AniMe Matrix display, and the RGB lights. The second one is for your USB header, as the keyboard has a USB passthrough. Yet what use is a passthrough if you’re already using two slots to even have it. This means, if your device has limited I/O, you’re going to have to adjust accordingly to accommodate the Strix Flare II Animate.

Perhaps what sets the Strix Flare II Animate from most of the mainstream crowd is its hot-swappable feature. ROG even made it easy and convenient without the need to take apart the entire board. With just the included puller you can easily pull out and swap in any 3-pin switch on the board. This is a feature more common on enthusiast-level boards, so it’s more than welcome. It also allows for a bit more flexibility, in case you want to swap out the default switches or just try others out.

The Blues of the Republic (ROG NX Blues)

Right, while the keyboard is hot-swappable you’ll first have to deal with its default configurations. That is either Cherry MX’s Red, Brown, or Blue switches or ROG’s very own NX. The one we have in our review unit is the ROG NX Blues. Clicky and tactile as it can be, I can’t really distinguish its difference from most blues I have tried. Although, the one on my Keychron K1 is a bit more tactile compared to this. Either way, this will still satisfy anyone who prefers the noise and feedback of a blue switch. Plus with a polling rate of a whopping 8,000Hz, who can complain?

We also have stabilizers ROG claims to be special. Yet, from my personal experience, it feels like any other stabilizer out there. It is a welcome feature, as it prevents wobbles on longer keys such as the space bar. However, that is the purpose of a stabilizer, and ROG’s, again, doesn’t feel all too special. Overall though, my typing experience was enjoyable as these are the switches I prefer. It wasn’t anything groundbreaking and gave me no further advantage in gaming than in any of my other gaming keyboards. Still, this is much better than a membrane keyboard.

ROG didn’t leave the Strix Flare II Animate bare as it has some extra features to provide some comfort and functionality to its users. The first of which are the media keys we’ve mentioned earlier found on the top left corner of the keyboard. You have here a volume scroll wheel, a skip/previous track switch, and a pause and play button. The other two are just switches to lock the windows key and turn off the keyboard lights. Either way, those media keys are a convenient extra feature that I’ve found myself using often.

The other feature is one of comfort as the keyboard comes with its own wrist rest out of the box. However, there’s a little bit of setup needed for you to attach them. First, you’ll have to remove the light diffuser on the base of the keyboard. Only then can you attach the wrist rest reliably. Thankfully you can tuck away the diffuser safely in the wrist rest itself as it has its own small compartment. Lastly, if you have the time and energy you can more than customize the lights of the keyboard using ROG’s Armoury Crate software. You do have per-key customization and Aura Sync support.

The ROG Strix Flare II Animate is not just your run-in-the-mill full layout keyboard. You have a surprising amount of flexibility and customization thanks to the board being hot-swappable. So, while it’s not a blank slate like most enthusiast-level boards, you can at least easily swap between switches. Then you have the added bling of the AniMe Matrix Display, which at times can still provide some useful info. The icing on top are the convenient media keys and the comfort of a wrist rest out of the box.

Our only gripe is the thicc USB connector and the fact that you need two slots to fully maximize the board. Oh, and also the slightly steep price tag of Php 11,390. There are other boards out there that are hot-swappable for a lower cost. Yet, if you’re a fan of the Republic or your peripheral ecosystem is pure ROG you can’t go wrong with this one. Either way, it’s still an overall solid keyboard if you can afford to spend that much.

That’s it for our ROG Strix Flare II Animate review, see you all in the next one!