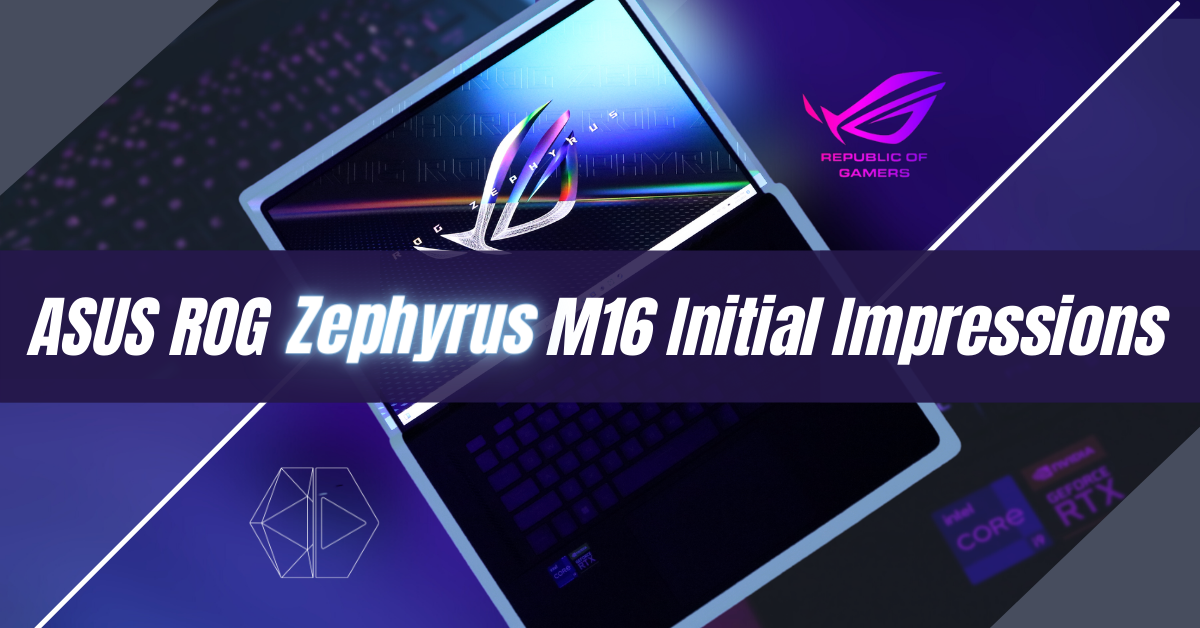 ASUS is back with a bang this 2022 with updates to their ever-expanding Zephyrus line. Among those receiving some bumps in specs and then some is the ASUS ROG Zephyrus M16 which we now have our hands-on. We’ll be taking this bad boy for a spin in the coming days but for now here are our initial thoughts with our short time so far. Take a look at our ROG Zephyrus M16 hands-on!

The ASUS ROG Zephyrus M16 may be getting a refresh this 2022 but we have the same ol’ look it had the year before. It still has that subtle yet sophisticated vibe with just the Dot Matrix on the lid as bling. Nothing changed for that too, it still has a prismatic shimmering glow when hit by light. So, those twinkles are still there to catch the eyes of the public. Don’t change or fix something that ain’t broken right? However, I did wish ROG took a different approach with the design of the rear exhausts.

Don’t get me wrong those exhausts add a bit of flair but the blast of air from those hit the display directly. In the long run that won’t bode well. Yet, they probably won’t be able to achieve the 180° Ergolift feature if they went for a different approach. So at least you can push the display all the way down for a good flat look. Plus you won’t have to worry about breaking the hinge thanks to its flexibility.

The material of the device is the same too and while it boasts a stylish matte finish it’s one hell of a fingerprint magnet and highly susceptible to wear and tear. Removing stains and marks takes effort even with microfiber. Build-wise though it feels solid and well-made with little to no flex on the screen and keyboard deck. Lastly, it’s still one compact and easy-to-carry device thanks to its weight and size.

One of the upgrades the Zephyrus M16 received was for the display. Much like its Zephyrus cousins coming out this year the M16 got the Nebula display treatment. ROG’s latest hot take on upping display technology. That name isn’t just for show though as we immediately noticed the quality of the screen right out of the box.

It also helps that the M16 is running on a WQXGA at 2560 x 1600 resolution. Icons, images, and everything else really pop and the display is crisp and clear. Of course, this one still has a high refresh rate at 165Hz, so we’re expecting some good smooth gaming. This display also boasts greater color accuracy and range, we’ll have to check and see. Though judging from what we’ve experienced so far it may not be just a boastful claim.

Now on to the major changes to the hardware of the M16. With the arrival of Intel’s Alder Lake or 12th Gen mobile processors, ROG was quick to the trigger to update their line-up. As such, under the hood of the Zephyrus M16 is none other than one of the flagship Intel Core i9 processors, the i9-12900H. This is one hell of a beast during our initial benchmarks using Cinebench as well as when paired along with Nvidia’s RTX 3070 Ti for 3DMark and Unigine.

There are variants with the 3080 Ti and 3060, though what we got was the middle ground. Despite that though, the 3070 Ti is more than enough to cover your gaming needs from our initial tests. We’re expecting great things once we really take these two for a spin. Lastly, we have 32GB of RAM and 1TB of SSD storage. RAM will be more than enough but that SSD storage will fall short after a while. Especially with the sizes of games nowadays.

Then on the OS side, we already have Windows 11 pre-installed. If you’re coming from Windows 10 there will be a bit of an adjustment as everything looks a little different. So far though we’ve had a pleasant experience with it on the M16.

Now with a compact size comes the worry of not having enough ports to support all your connection needs. Well, despite its small size the Zephyrus M16 surprisingly provides just enough. We have on the right a microSD card reader and one USB 3.2 Gen 2 Type-A port. That card reader is a much welcome real surprise.

Especially for content creators to easily transfer images and videos. Then on the left, you have two USB Type-C ports, of which one is a USB 3.2 Gen 2 with display port and power delivery and the other a Thunderbolt 4. Joining those two is the other USB 3.2 Gen 2 Type-A port, an HDMI 2.0b port, an RJ45 Ethernet port, and a 3.5mm combo audio port.

Your standard Keyboard and trackpad

As for the keyboard and trackpad, nothing really changed from before. You still have that tenkeyless chiclet keyboard with media buttons and a ROG center quick trigger up top. The trackpad is still big enough to do gestures moves but small enough to not hit when typing. It’s also the same smooth clickpad as before. Despite that though, the keyboard is a bit shifted to the right, so I had a bit of adjusting to do when typing coming from my external keyboard.

The ROG Zephyrus M16 of last year was already a beast of a compact laptop, so we expect this year’s to be even more. Much of the goods remained such as the thin and light frame, the Dot Matrix bling, and the overall subtle aesthetic. We then have some pretty good upgrades with Alder Lake as well as that Nebula display. So far, we’ve been having a great experience with this new Zephyrus M16. The only problem we see is the steep asking price, our review model has a tag of Php 169,995. It’s going to take a lot of convincing for anyone to shell out that much if there are other more affordable alternatives. However, we shall see if that Nebula display and ramped-up specs are worthy of the asking price. That’s it for our Zephyrus M16 hands-on, stay tuned for our review!