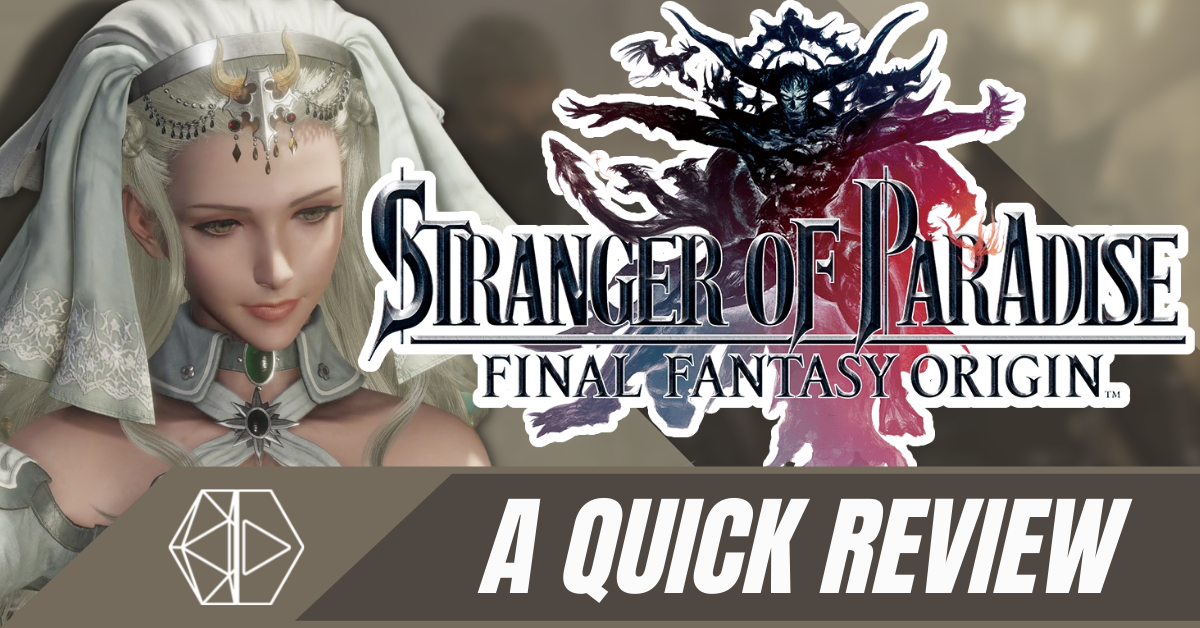 Stranger of Paradise: Final Fantasy Origins isn’t really the official sequel to Final Fantasy XV. Rather a prequel to the events of previous Final Fantasy games. Although this will be a gameplay review, there will be spoilers for those who haven’t played the first few titles. So don’t say we didn’t warn you.

And now, the end is near

You play as Jack Garland, yes! that Garland from the first-ever Final Fantasy. Rather you play as him in a retelling of the story before he became Chaos himself. You set forth in your journey defeating monsters to prove yourself worthy of breaching the chaos shrine. All the while fulfilling the prophecy regarding the Warriors of Light and the crystals.

Unlike previous titles, Stranger Of Paradise: Final Fantasy Origins is a nittier and grittier take on the series. The protagonist isn’t one to mince words, rather a downright man-on-a-mission kind of person. Such as punching a boss mid-speech, aside from that he is mainly focused on defeating chaos.

I’ve travelled each and every highway

You are shown three difficulty levels when you start the game; story, action, and hard. All of which corresponds to what kind of playstyle you prefer. But trust us, even the Story mode difficulty is harsh enough as it is. You can however change the difficulty at any given time.

I did what I had to do

The game itself follows the formula of the last few Final Fantasy games, which is more hack-and-slash than turn-based combat. However, this one takes the cake by actually being a souls-like game in disguise. The difficulty of combat here is through the roof, where losing all HP takes you back to your save point.

Even the formula for the protagonist seems different than that of the previous ones. Unlike before where the protagonist looks like they came from an anime, Jack seems like he came from a wake. He mostly comes off as brooding, focused on his mission, and a bit crude. A proper character formula for an anti-hero turned villain if I do say so myself.

I planned each chartered course

Stranger of Paradise: Final Fantasy Origins features the job system which was lacking in Final Fantasy XV. To those unfamiliar with it, this system lets you change classes and skills. The classification for the jobs is Basic, Advanced, and Expert. Unlocking a job may mean that you need to level up and unlock them on the skill tree nodes. So far there are 27 different classes, to master and choose from.

Here is a list of the current jobs and requirements to unlock the advance and expert ones.

When I bit off more than I could chew

Combat in this game is quite easy to grasp since there are no fancy combos or spell key binds like Final Fantasy XIV. Combos are programmed in the character settings by assigning certain skills to be triggered in a chain or as the first skill. However, it still differs per job used, such as the spell wheel for mage classes which lets you pick the spell to be used in battle.

I faced it all

As the future protagonist, you must train yourself hard to be acknowledged and be worthy of the title. To do that you have to grind for gear and experience in this game. Leveling up isn’t that hard as encounters in this game are frequent and they respawn after you use a cube. Another thing is the replayability of dungeons which could be used to grind for experience at certain levels.

Just know, however, that advanced and expert jobs requires more experience to level up than basic jobs. Another way is by using anima shards which can be dropped or received after clearing a quest. Using a shard grants a set amount of experience (which the system shows, so don’t worry about that.

I find it all so amusing

As for gear drops, there is no problem about the lack of it, rather it gets infuriating on how many items you have to sort through. However, don’t dismantle those gears just yet! Sometimes items will drop and with job affinities, these stats unlock job affinity bonuses. Job affinity bonuses differ per job, they give you bonus basic stats or effects on higher levels.

So make sure that you have utilized your and your party member’s equipment for the sweet bonus. Other gears in Final Fantasy Origins feature skills that can be equipped as quick cast or combo parts. Just know, however, that removing them from your equipment slot will leave the combo blank unless you fix it. A neat thing about this game is that whatever you’re wearing in-game is the same gear you’re using in cutscenes (fashion!).

I did it my way

Whether you’re playing it casually, as a dress-up simulator, or practicing for Dark souls, just know that you played it in the way you wanted. The story content is enough to keep hardcore and avid final fantasy fans to glued to the screen for the next 14-20 hours. Meanwhile the combat and job system will challenge and keep you grinding for days.

Honestly I’ll finish the story in a couple of days, and probably grind and unlock all the jobs along the way. Well Until next time, I’ll be busy grinding for I MUST DEFEAT CHAOS!