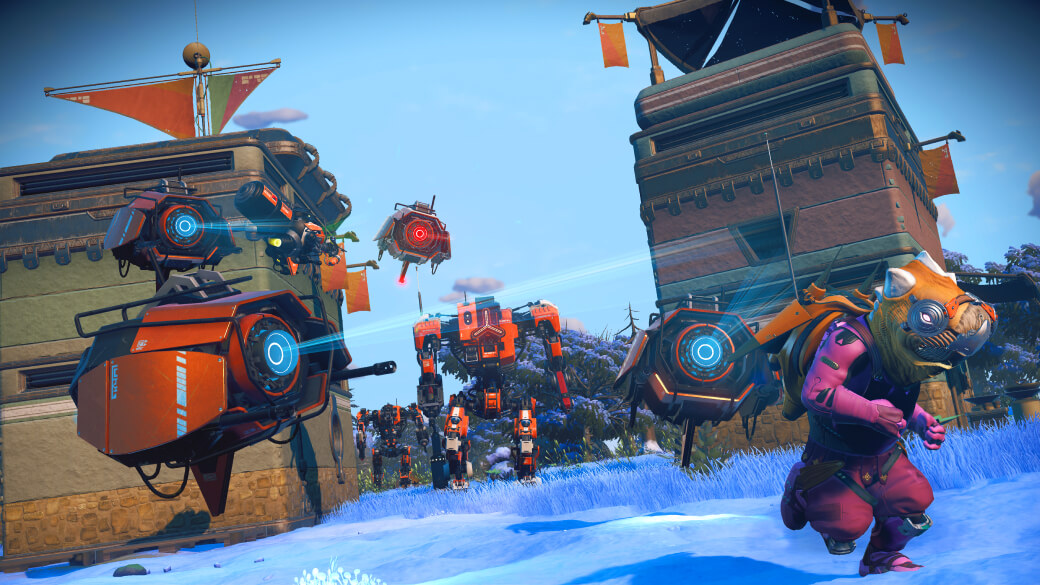 We get it Hello Games!

It’s no question that Hello Games have redeemed themselves with continuous free updates to No Man’s Sky. Although, they’re not finished yet as they have released another one. This time, The Sentinel Update is here, giving us a massive overhaul of the combat system and the sentinels for FREE.

A new unit of sentinels is added, in the form of battle mechs! These mechs are very mobile, and equipped with a jetpack, so good luck trying to escape them. To add to that mobility, they also have flamethrowers! These great adversaries can reward you with hardware mech upgrades. You can use these on your own mech, so “fight fire with fire”

Normally, when sentinels are spawned, they spawn far. They then go to your last known location and fight you if you are there. Otherwise, they will search for you. Well, this is where the summoners come in. They just summon sentinels that are ready to fight near you. They are generally weak sentinels, but they continuously summon new sentinels. Leave them alone, and an entire army will quickly rise to overwhelm you.

Much like the summoner drones, repair drones are also weak. However, they can rapidly heal other drones: walkers, mechs, summoners, drones, you name it! Everyone needs a healer, even drones. So keep a lookout for these cheeky bastards, they will make your life harder.

The 1st to lead the charge, a new and improved drone will be the main combatants on their quest to wipe you off the map. What makes them different now is that they are tankier than your normal combat drones, so it will take a significant amount of firepower to bring these down.

However, these combat drones don’t just simply shoot you with lasers, the heavies and the normal ones now have a varied arsenal. From firing lasers, to scatter blasters, explosive mortars, to even an actual shield. Anyone who plays shooting games can tell you how annoying shields are. Now we have a swarm of drones that have them and also protect others.

Sentinels also have a new structure than can be seen in planets: Planetary Sentinel Pillars. These pillars are guarded by a swarm of sentinels, which includes the deadly hardware mechs. High Risk, High reward, as these pillars give you quests, upgrades, weapons, and even exotic multi-tools.

Since, this is essentially a combat update in all intents and purposes, aside from overhauling your enemies, your combat with the multi-tool also gets an overhaul. There are new combat-focused multi-tool effects and upgrades. These include adding elemental damages for each of your weapons or allowing your lasers to stun enemies. They have reworked the existing weaponry, changing its visuals and feedback, to make it feel better for the player.

Even multi-tools have been added, like the Neutron Cannon, which can be charged up and Active Camouflage, for those benevolent players. The Paralysis Mortar is essentially an EMP grenade, and what is EMP effective on? ROBOTS! The number of multi-tools you carry has also been increased from 3 to 6. So you have more multi-tool loadouts in your arsenal. A prepared interloper is a deadly interloper.

Of course, if you’re fighting an army of robots, you can also bring your own army. The Sentinel Update also improves combat with your own mech, which now has more weapons and increased mobility. If you’re not riding it, you can outfit it with an AI, such that it fights alongside you. But, mechs are not the only ones to fight beside you. The very fauna in planets also assist you in combat, so the number of Creature Companions that you can have is increased from 6 to 18!

The best part of this update? IT’S ALL FREE. Well, you have to buy the game first. We’ve given you a general gist of all that’s been added in this Sentinel Update. If you’re skeptical whether this article is just a figment of your imagination, well you can see proof right here.