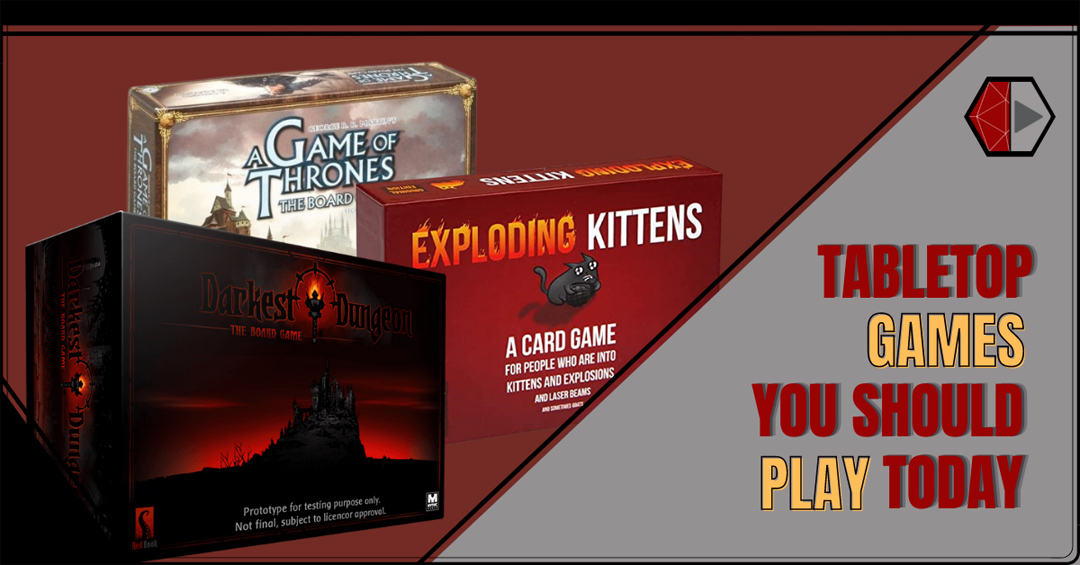 During this pandemic, playing tabletop games with friends has been hard. However, with the global restrictions easing up, it’s time to revive that fun face-to-face activity again.

In our previous list, we tackled digital multiplayer and party games that you can play today. Today, we’ll list down our top tabletop games that you should play with family or friends. Let’s begin!

Do note though, that we are still in the midst of the pandemic so please be extra careful when meeting in groups.

This category includes games that were released in 2021.

From the original 7 Wonders game comes a new addition to the franchise. Much like with the base game, the player’s goal is to achieve the highest victory points. However, 7 Wonders: Architects revolves on wonders and when finished, it will end the game.

This just means that the game is more beginner and child-friendly as the estimated game time is lower than other installments.

Darkest Dungeon: The Board Game

Darkest Dungeon: The Board Game is a cooperative dungeon crawler game much like the video game. Players can accept missions with varying threat levels and defeat bosses at the end of each campaign. If you haven’t played the video game yet, then we suggest that you try it as well.

Launched on Kickstarter last November 2020 and today, the pledges reached more than 15 times their original goal. You know that this game is highly anticipated because of this so check it out!

As part of Disney’s 50th anniversary, the popular entertainment company launched its fast-paced board game called Mickey and Friends Food Fight. This dice game’s goal is to win three rounds by clearing the player’s tray. Players will simultaneously roll the dice, fling food onto the central tray, left, or right based on what the player rolls.

We haven’t played it personally yet but based on the game’s description, it will definitely be fun for everyone — family and friends alike.

If you’re fond of Dungeons and Dragons type of games, then here’s a 2021 take on it. Hero Quest features 1 game master that will organize the maze-like dungeons and 4 players. The 4 participating players can choose among 4 classes namely wizard, elf, dwarf, and barbarian.

Expect lots of dialogues and role-playing in the game which will hype your squad even further. We’re quite excited in trying this game out too once we get our hands on it.

These games are great for all ages. Some of which are old games but are equally fun even today!

One of the classic card games of today. Uno may have gone digital already, however, nothing beats holding the physical cards and shouting “UNO” in front of your group.

The goal of the game is to empty your hand and if you’re down to your final card, you’ll have to say “UNO” so that it becomes valid. Failure to do so will penalize you and have you draw two more cards. Thus, the cycle begins and you must try to empty your hand again.

A game for people who love cats and explosions. Exploding Kittens is a fun card game with the goal of not getting the “bomb kitten” card. The most powerful card in this game is the “defuse” card which gives you a free pass when you accidentally draw a bomb kitten card. It’s more fun to play it when you’ve played it already so check it out!

A spinoff to the classic Monopoly board game is Monopoly Deal. This card game’s goal is for the player to have three full properties laid out on their pile.

Watch out for cards that allow a player to steal from your properties though! Make sure to always have a “Just Say No!” card on your hand to prevent them from stealing!

A Game of Thrones: The Board Game (Second Edition)

One of the board games that really took my time (literally) and my interest in tabletop games is this. A Game of Thrones The Board Game is basically why I’m loving tabletop games even further. Based on the famous book series, and eventually TV show, by George R. R. Martin, this game follows the rich lore of Game of Thrones.

You can play with up to 6 players representing the different houses. Just explaining the mechanics of the game will take you an hour if you are new to the game. The last time I played this with friends, it took us around 6 hours to finally finish it. Check this out if you have a lot of time to spare!

A fun game with high replayability value. King of Tokyo lets you pick among giant monsters with their own sets of abilities. Cards drawn in the game also serve as the key to winning it all. The main goal is to be the last one standing amongst other monsters. This is a nice game for family gatherings so come check it out!

Last, but not least is 7 wonders. The game will let you think a lot about the next steps that you’ll make. This board game requires strategy and a little bit of politics with the person adjacent to you. The goal of the game is to have the highest victory points (VP). With that said, there are a lot of ways to get VP so try to pick different civilizations every time you play this!

That wraps up our tabletop games list that you should play today! Make sure to take proper safety cautions when meeting up with your friends or family personally!

What do you guys think? Let us know your thoughts in the comments section below.

The Emperor's Legion Clan Pack for Legend of the Five Rings: The Card Game announced