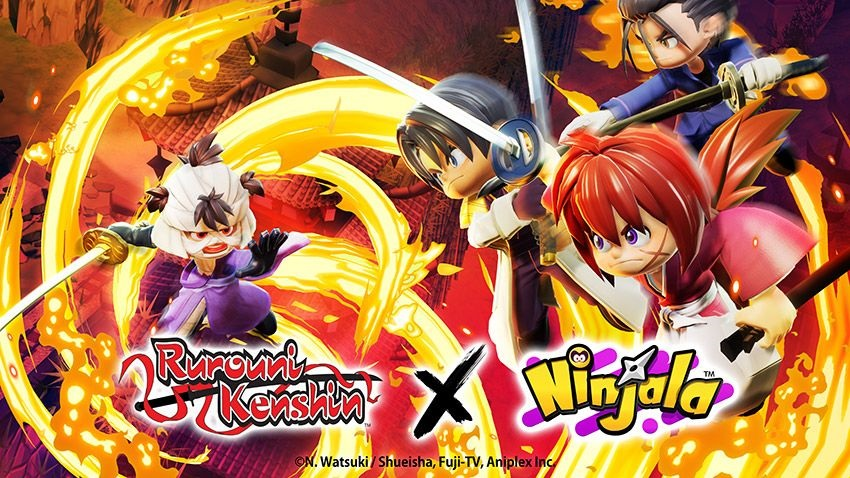 Ninjala is on a streak since its release last year and continues on with its collaborations. This time around the game will have a collab with the well-known Anime, Rurouni Kenshin. Are you ready to see Battousai in chibi form?

The Rurouni Kenshin Anime x Ninjala Collaboration, like most of their collabs, was announced during the 20th dev diary of Ninjala. This is also a way of celebrating the 25th anniversary of the Rurouni Kenshin anime. Much like the previous partnerships, this one will include special outfits and unlockables. First and foremost, we have outfits for Kenshin Himura, Hajime Saito, Aoshi Shinomori, and Makoto Shishio.

The Shishio outfit will be available in the game’s Gacha Gumball Machine. Additionally, the Gacha also includes five different Ninja-gum such as Kenshin Himura’s Sakabato, Makoto Shishio’s Mugenji, and Sanosuke Sagara’s Zanbatou. Three other outfits will also be available in the Shinobi shop.

Apart from all the outfits and Ninja-gum, the collab will also include a recreation of the special attacks of the Rurouni Kenshin main cast in the form of emotes. These have hitboxes, so yes, you can hit opponents with them. Then you have IPPON Decorations of Kenshin Himura and Makoto Shishio and Gum Utsusemis of Sojiro Seta and more. As well as a special T-shirt after Sanosuke Sagara and a Sakabato Bottle.

Ninjala is also implementing a battle frequency bonus for the collaboration. Players can earn rewards such as collab stickers, Shinobuzz Gum, and Gumball Machine Coins. Lastly, the game will be hosting an in-game tournament dubbed the “Rurouni Kenshin Cup” starting January 8th at 6 PM PST and will run for 6 hours. The collaboration begins December 15th, 2021 and will be up until January 12, 2022.

Spider-Man Remastered is getting a PC release this year