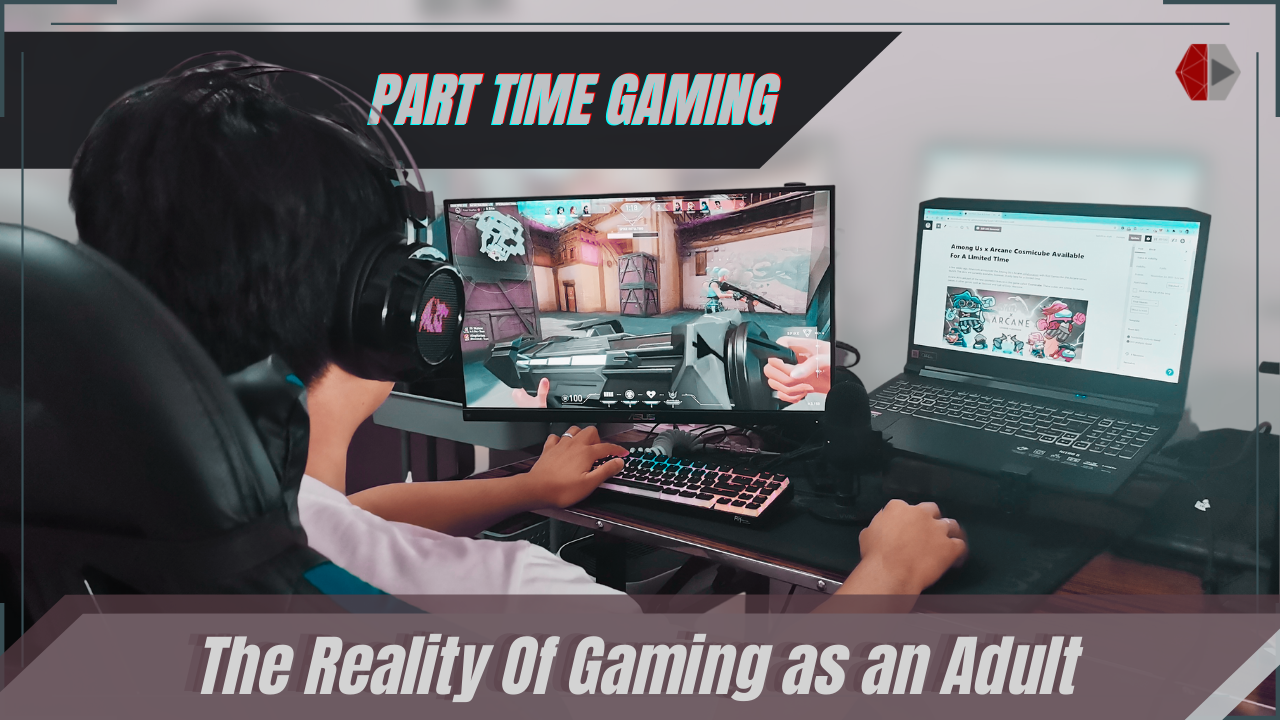 Remember that time when you were a kid and what matters is playing that cool new game with friends? You imagined yourself as an adult with all the money and time to buy and enjoy the latest games. However, the cruel reality is that now that you have the money you no longer have the time. Such are the woes of gaming as an adult.

Congratulations! you just turned 20 and probably working your first real job, paying the bills like a real adult. You think to yourself “I got the money to buy that game that I always wanted”. However, you just don’t have the time to play. Sadly, this is the sad truth for most of us who are a slave to our day job. Yet gaming destresses us and gives us time to relax and enjoy after a long hard day.

Gaming once in a while is beneficial as it can be an outlet for relieving stress and fatigue. A survey conducted by Leonard Reinecke revealed computer games as a coping mechanism for stress recovery. The study observed the association of the usage or playing of video and computer games after stressful and exhausting situations in 1,614 participants.

What Keeps us from Gaming?

Even though we badly want to game, there are a lot of factors that keep us from playing. There are days or weeks where we badly want to play, yet real-life obligations just won’t let us. We have our work duties and responsibilities to worry about and deadlines to keep. Finding time to game was always a matter of sacrificing rest so you can play.

Despite the craving, we usually choose to rest due to exhaustion and work fatigue. Another factor is that we spend our off days socializing with friends and family. After all, we have been busy for a week or so and only have a little bit of time to bond with them before going back to the grind.

One more factor is the threat of burning out, the unshakable feeling of looming anxiety hindering us from enjoying things. It is one thing to be stressed after work, however burning out is something which should be taken seriously. My only suggestion is for you to seek professional help when it gets bad. Sometimes resting your mind and body is better than getting that MVP.

It is even harder for people who juggle multiple jobs, it just seems impossible to game. However it isn’t entirely true, I for example have two jobs and a sideline but I still have time to play. Although, this is only possible by knowing when to stop overworking and learning when to reap the fruits of your labor.

Turning your part time gaming into your full time career

Who says life is all work and no play? Sometimes you just have to mix career and gaming into one. Take streamers and shout casters for instance. From starting their careers in different fields to ending up in gaming or starting their own journey in this field. These personalities eventually hit two birds with one stone in their pursuit of the perfect career. Perhaps you could learn a thing or two from their stories.

Who said gaming as an adult has its limits? Meet Michelle Statham aka Tactical Grandma who’s not your typical granny. The 56-year-old streamer is known for playing battle royale games like Call of Duty: Warzone. She usually plays with other female streamers while running a live chat with her viewers.

Her first-ever game was Pong for Atari, and she has been gaming ever since. She got into streaming as a result of having arthritis on her thumb which hindered her from using controllers. Although she only started streaming a few years ago, she already has a steady following on Twitch and Tiktok.

He started off as a Disc Jockey (DJ) and later as an improv and theater actor then later co-founded ComedyManila in an attempt to revolutionize the Philippine comedy scene. Eventually he got recognized for his contributions to a local comedy show “Bubble Gang”. He, later on, worked for MTV but was eventually made defunct.

His first stint at shout casting was in 2011 when he got involved with MOGTV. He was then invited to cast the Gigabyte Mineski Pro-Gaming League, there he gained notoriety in the DOTA2 community. Although a gamer since birth, Eri never played DOTA nor the sequel DOTA 2. He still hosts events and does event shout casting, as well as doing tech reviews. You can follow his Facebook and Twitter accounts for more updates.

The perks of gaming as an adult

Other than the potential of making it big someday as a streamer, gaming has other benefits. Everything we do provides us with experiences and information we can use in real life. In rare cases, we may also learn new things such as historical information or useful trivia. In fact, gaming isn’t an exception to this. These are just some of the different perks and benefits to gaming aside from being just a stress reliever or entertainment.

It improves your social skills

Games today features different communication methods. For instance, you can now use voice communication in games like EVE Online and Warframe. As a result of this new in-game technology, people can grow their social skills. Gone are the days where communication is only face to face. Hence, we can talk whenever and wherever we are. Another thing is that it somewhat teaches you how to emphasize, be it the death of your favorite character or by doing a quest for an NPC.

With the advent of technological advancement comes Virtual Reality (VR) technology. VR provides the user with freedom to move as they please in-game as is in real life. As a result VR users are getting the exercise that they need to maintain good health while they play. Games such as Beat Saber and Super Hot VR could help the player to be active and stay in top shape.

Games also improve reaction time in real life, First Person Shooters (FPS) and rhythm games help players work on their dexterity and agility. A study even found that surgeons who played video games were faster and made fewer errors than their colleagues who did not. Games such as Valorant and OSU could help players train their eye and hand coordination.

While some games aim to teach their audience to think critically, other games reward players for their perseverance. Similar to gaming, some real-life problems are meant to be forced and tackled head-on. Consequently, games like Darksouls and GTFO sometimes force the player to play and replay scenarios to find the solution to beating the stage.

Addiction and all that is bad for you

“Too much of the good thing isn’t good for us” or so the saying goes. Although a great escape from the daily grind, gaming can also be bad for you. As we play games, our brain releases dopamine in response to pleasurable experiences (in this case, gaming). Our response to this is to seek out more of this pleasurable experience (you can read more about addiction here.)

Playing too much video games can also affect your physical, psychological, and social life. Below is a list of some of the negative effects of too much gaming.

Work-Life balance is what matters

Gaming as an adult is a tricky situation as age comes with responsibility and obligations. However, don’t let it discourage you from doing what you enjoy. You just have to hit that sweet middle spot of fulfilling your obligations and rewarding yourself with ample time to do what you enjoy.

We hope that you find the time to do what you want, we know how much it sucks to be working non-stop. Every member of Dice & D-Pads knows the difficulty of balancing our work, social, and gaming life. So we honestly wish everyone here luck.

Until we meet again!

Contents hide
Checks and balances
What Keeps us from Gaming?
Turning your part time gaming into your full time career
Notable gaming personalities
Tactical Grandma
Eri Neeman
The perks of gaming as an adult
It improves your social skills
Excercise (VR)
Hand and eye coordination
Persistence and hard work
Addiction and all that is bad for you
Work-Life balance is what matters