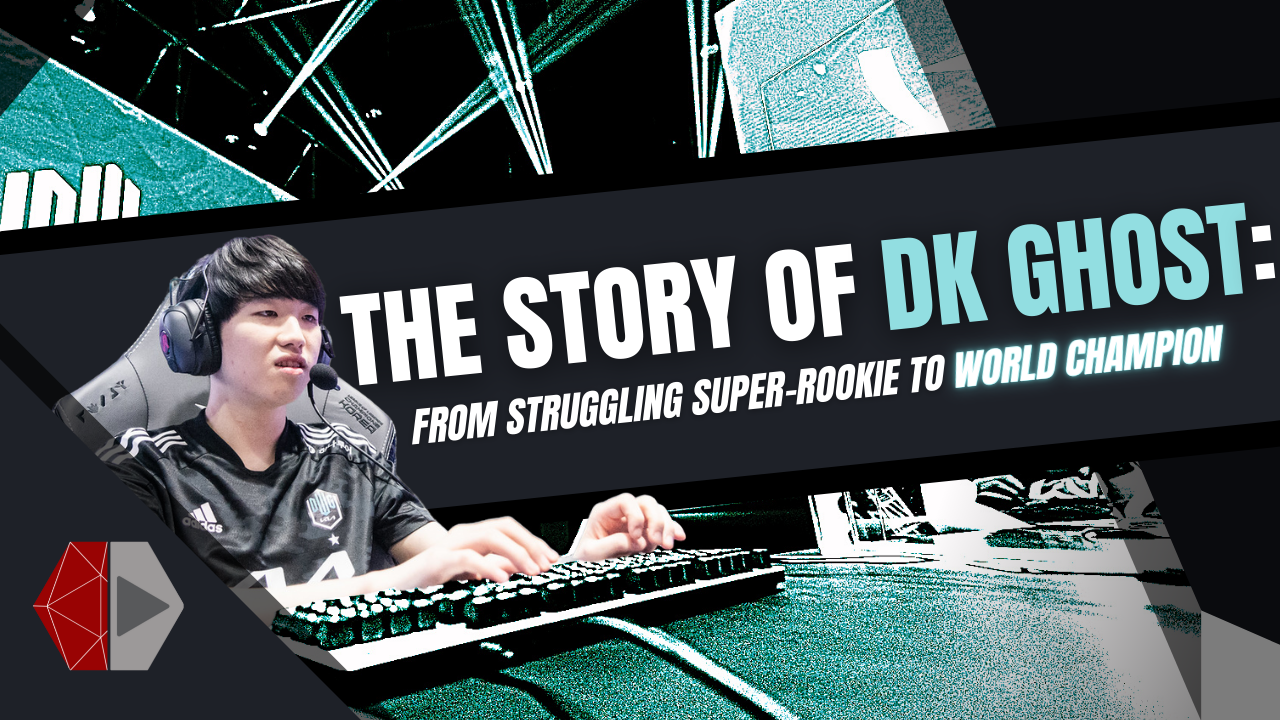 Despite their loss to EDG in the 2021 LoL World Championship finals, Damwon Kia (DK) has still firmly cemented themselves as Korea’s best team. Moreover, DK was also in every final, domestic and international, since summer 2020. This matches the record initially set by SKT from 2015 spring to 2016 summer.

However, DK wasn’t always this dominant. Back in 2019, they were a consistent fourth-place team in the LCK, and barely a challenger for the world championship. While the team boasts the likes of future Worlds MVP Kim “Canyon” Geon-Bu and superstar mid-laner Heo “Showmaker” Su, it was the arrival of one man that made this team go from good to great: Jang Yong-Jun, aka DK Ghost.

Contents hide
CJ Entus’ Super Rookie
BBQ Olivers: Bottom Half of the LCK
Back to square one for DK Ghost
An Upward Trajectory with Sandbox Gaming
First year with Damwon
Ghost and Damwon’s Success
The Rest is History
What’s Next?

Despite his eventual peak in Damwon Gaming, DK Ghost took a while to ramp up. He was initially pegged to be Korea’s next super rookie, but he failed to reach playoffs in the first three years of his career. By the time he had moved to Damwon, nobody saw anything special in him, until they won LCK Summer, and conquered the world. DK Ghost’s pro career started at the ripe age of 16 when he was scouted out by CJ Entus (CJE) in April 2015.

Despite this, he never played a game in the LCK from 2015 to 2016 spring due to being underage. At the time, analysts and league insiders hyped him up to be Korea’s next superstar AD Carry. Korean Challenger players also feared him in SoloQ for his insane mechanics. Everything was lining up for Ghost to make his debut and establish himself as the ‘Faker of the bot lane’.

His time on the big stage would eventually arrive in the 2016 LCK Summer split. Despite having legends like Madlife on the roster, CJE was having the worst split of their existence, entering the second-round robin with a 1-8 record. Alongside a certain Gwak “Bdd” Bo-Seong, people expected Ghost to be the super-rookie that would save the floundering CJE roster. Unfortunately, his Superman moment would not arrive. He only played one series that split, a 0-2 defeat to MVP.

Adding insult to injury, CJE finished the split with a 3-15 record, even getting relegated in the process. From Ghost’s point of view, this definitely wasn’t the start to his pro career that he wanted. Following CJE’s relegation, he looked elsewhere. Ghost eventually settled on the newly-rebranded BBQ Olivers (BBQ) team, where he would play his first full split as a starter.

BBQ Olivers: Bottom Half of the LCK

In the winter of 2015, a Korean challenger team by the name of ESC Ever stunned the LCK community. During the 2015 LoL KeSPA Cup, they managed to upset an SK Telecom T1 team fresh off winning the world championship. A year later, in the summer of 2016, they finally qualified for the LCK and were looking to make their mark on Korea’s top league. Unfortunately, they lost several of their key players to LPL teams and were barely able to live up to the hype. They finished 9th in the 2016 LCK Summer split, slightly ahead of CJ Entus.

Despite many changes, things wouldn’t improve for BBQ with the addition of Ghost. Coming into the spring of 2017, ESC Ever had rebranded as BBQ Olivers and was looking to turn around their fortunes. The rebrand wouldn’t really matter as they finished 7th and 9th in the spring and summer splits, respectively.

Entering 2018, the team made even more changes. BBQ managed to add Kim “Trick” Gang-yun and Lee “IgNar” Dong-geun, fresh from their dominant performances in G2, and Misfits, respectively. This wouldn’t translate to improvements in the standings either, as they finished 9th in LCK Summer 2018.

Back to square one for DK Ghost

Since the LCK wasn’t franchised back then, this meant that Ghost had to play in yet another promotion tournament. This time, they would be knocked out of the LCK by an up-and-coming challenger team, Damwon Gaming.

For Ghost, this meant that he was back to square one. At this point, he had yet to reach the LCK playoffs and his team had once again been relegated from the LCK. In the eyes of many analysts, Ghost also wasn’t a standout performer on his stint with BBQ. Not a good look for someone pegged as Korea’s next great ADC.

An Upward Trajectory with Sandbox Gaming

Following the relegation of BBQ Olivers, Ghost joined yet another newly-promoted (and rebranded) LCK team. This time, he was to be the AD Carry of Sandbox Gaming. He was paired with the likes of Park “Summit” Woo-Tae, a player widely considered to be one of Korea’s best top laners. Unlike his stint in BBQ, things started to look up for Ghost.

Sandbox Gaming always tried to play towards their greatest strength, the top lane. As a consequence, Ghost had to play on the weaker side of the map for most of their games. At this point in his career, he was no longer a superstar bot laner who could 1v9 games, but a role player- a weakside AD carry that would absorb pressure and allow other members of his team to thrive.

Fortunately for Ghost and Sandbox, they would thrive with this type of playstyle. For the first time in his career, Ghost managed to reach the playoffs. Sandbox Gaming also achieved fourth and third place, in spring and summer, respectively. These were the organization’s best regular-season records, to this day.

Despite their strong regular season showings, Sandbox Gaming failed to make worlds. They lost to Kingzone DragonX in the 2019 Worlds qualification gauntlet. Later on, Kingzone would also miss out on worlds after Damwon Gaming defeated them in the gauntlet finals. This aside, 2019 was Ghost’s most successful season so far. He could only hope things would get better as he signed a contract with Damwon Gaming to be their AD carry in 2020.

While Ghost joined Damwon at the start of 2020, he rode the bench for most of the spring split. The team opted to field long-time AD carry Shin “Nuclear” Jeon-Hyeon and would finish 5th in the regular season. However, Ghost did get to play all of Damwon’s playoff games, where they would ultimately finish fourth.

These results were, more or less, what people expected of Damwon. After all, they were a young team with young players. They were good enough to be a team that could make the playoffs, but not take the championship and challenge the more established orgs of SKT (T1) and Gen.G. However, in the summer of 2020, the boys in the sky-blue jerseys would stun the world.

Out of nowhere, Damwon Gaming steamrolled over everyone in the 2020 LCK Summer split. At the end of everything, they boasted a 16-2 match record, one win short of the all-time record. The entire team, except for Ghost, would also be part of the LCK all-pro team. Ghost would still be part of the 2nd all-pro team, behind his other teammates. In the playoffs, Damwon gaming would smash DRX 3-0 in the finals, to claim their first LCK championship. Korea had not seen a team as dominant since the glory days of SKT, and LCK fans were starting to get excited.

Come to think of it, Ghost’s new playstyle was perfect for how Damwon played the game. As mentioned earlier, he was a weakside AD Carry who did not need that many resources to succeed. This meant that Damwon could funnel gold into their two primary carries in Jang “Nuguri” Ha-Gwon and Heo “Showmaker” Su.

Ghost was also fine with being left alone in bot and could manage himself well in 2v1 situations. This allowed Damwon’s jungler, Kim “Canyon” Geon-bu and support Cho “Beryl” Gyeon-hee to roam around the map to set up vision and carry out ganks. His teammates also credited him with being the shot-caller in a lot of high-pressure team fights.

As a result, Damwon quickly overwhelmed opponents by being everywhere on the map at once. The gold funneled into Showmaker and Nuguri also meant that their mechanical prowess and godlike game-sense could translate easily into wins. All that was left for this team to do was to win the 2020 LoL World Championship.

The Rest is History

Much like LCK Summer, Damwon Gaming took the 2020 LoL World Championship by storm. Damwon would prove to be a cut above the rest as they tore through team after team. They defeated European powerhouse G2 Esports, and domestic rivals DRX, en route to the final. Eventually, they beat Suning Gaming 3-1 in the finals, securing Damwon’s first world championship and Korea’s first Worlds win since 2017.

DK Ghost had come a long way since his debut on a struggling CJ Entus roster, four years prior. He never turned out to be Korea’s next superstar AD carry. However, he was an integral part of the Damwon machine. After all, Damwon first rose to prominence once he started playing on the roster.

Following their 2020 season, many expected Damwon (now Damwon Kia or DK) and DK Ghost to dominate 2021 and establish LoL’s next dynasty. Unfortunately, that wasn’t the case. While they managed to win the 2021 LCK Spring and Summer seasons, they failed to win an international event. Most notably, EDG managed to upset the team in the finals of Worlds 2021.

As usual, the future of DK Ghost is quite uncertain. While he is staying on Damwon until 2022, the contracts of Showmaker and Canyon are set to expire this year. Combined with the fact that Beryl may be headed towards military service, people find it unlikely that the current Damwon roster will ever play together again.

Then again, DK Ghost has been here before. He has joined many teams in the middle of rebuilding and rebranding and has shown that he is willing to reinvent himself for the benefit of the team. It took him four years since his debut, but he eventually reached the peak of the sport. With that kind of perseverance, it’s definitely not out of the question for him to return there.