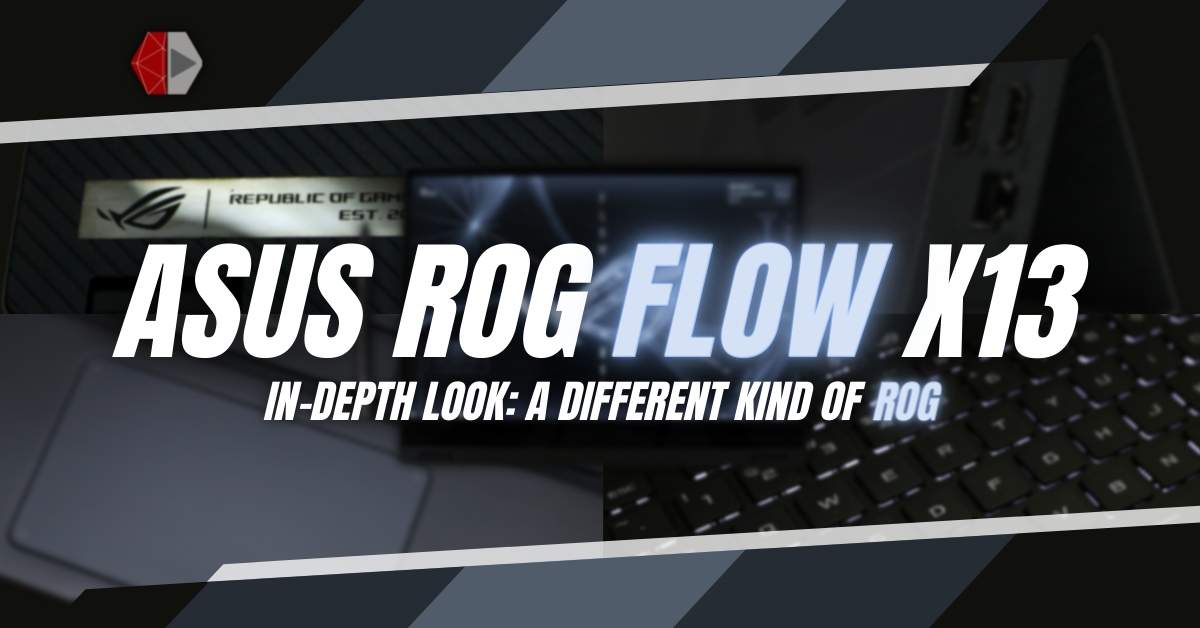 The ROG Flow X13 is unlike any before it, here’s our in-depth look!

ROG is not one to shy away from creating eye-catching machines, this all started with the original Zephyrus back in 2017. The GX501 revolutionized how we saw thin and light gaming laptops during its time. Fast forward to today and ROG is looking to yet again change the game for another segment — The 2-in-1s.

Enter the ROG Flow X13, a gaming machine with a lot of twists. So what makes this one different from other ROGs as well as the rest of its peers? Let’s find out in our ROG Flow X13 in-depth look.

Contents hide
A professional look
The Flow X13 can do Yoga
A 4k display with a catch
Impressive Speakers
A simple keyboard and a glossy touchpad
Ports that will leave you wanting more
Performance that needs a boost
Initial Verdict
ROG Flow X13 Variants, Specs, and Price
XG Mobile Specs and Price

When you first set your eyes on the ROG Flow X13 you’d think it’s a professional work laptop. That’s because, unlike its ROG brethren, you don’t have any over-the-top design flairs. There’s no AniME Matrix display, no flashy underglow RGB lights, there isn’t even a rising bottom chassis for extra cooling.

What we have here is a straight forward slick, simple, and discreet-looking machine. It’s not entirely bland though as you still have subtle a dual-tone display lid with textured lines alongside a ROG nameplate. However, with this kind of look, it’s easy to slip the Flow X13 in coffee shops without drawing crazy attention.

That same professional feel extends to the keyboard deck. The palm rest and touchpad area retain the same textured lines as the display lid. Although cleverly hidden on the right-hand side is the ROG eye logo, smooth design touch there ASUS. However, the rest of the deck is now in a matte-type finish. Sadly, the entire chassis is sensitive to fingerprints and smudges, so better have a microfiber ready at all times. Other than that, it’s actually a breath of fresh air seeing a gaming laptop without all the flairs.

The Flow X13 can do Yoga

Yes, you read that right and as we’ve mentioned earlier, ROG is looking to shake up another segment of the laptop market — The 2-in-1s. Now, 2-in-1s aren’t really new in the block, we’ve seen them years ago. They are the attempts of manufacturers to create a Mobile and PC hybrid or rather a tablet and PC hybrid. So typically, these machines can transition from being on a desk to being on a couch or bed.

Only this time, ROG is kicking it up a notch by introducing a device that not only provides flexible productivity but also flexible gaming. As such, the Flow X13 is able to bend enough to transition to different modes. These include your traditional laptop mode and the 2-in-1 specials — tablet, stand, and tent mode. Before you ask, yep, you can game while on tablet and tent mode, provided your game supports touch controls.

We did mention that the ROG Flow X13 is also a device for productivity right? As such, not only do we have a touch screen display and various modes for flexibility, we also have our very own stylus. It’s not often you see one out of the box. It’s non-rechargeable and just a basic stylus but at least ROG went out of their way to give creators the tools they need without any extra purchases

A 4k display with a catch

Now ROG didn’t only provide us with a flexible gaming machine, they also added a beautiful display to top that off. The Flow X13 we have here comes with a 13.4-inch 16:10 UHD (3840 x 2400) IPS Gorilla Glass touch screen with thin bezels. Yep, that’s a 4k display on a teeny tiny body meaning more pixels, meaning crystal clear and crisp images. However, despite the eye candy, there is one glaring problem, we only have a 60Hz refresh rate. In an era where even the most inexpensive gaming laptop has high-refresh-rate displays, 60Hz will be a deal-breaker.

Especially, if you’re someone like me who’s had the distinct pleasure of using 144Hz to 360Hz daily drivers. The difference just stares you in the face as everything feels really slow. Even normal scrolling when browsing through files or the web feels sluggish. Of course, this also translates to gaming, slow-paced games won’t be affected that much but fast-paced ones, oh boy. Luckily, there is another variant with a 120Hz FHD (1920 x 1080) display. Sadly for us, we’re taking a look at this one.

Laptop speakers aren’t something you can always brag about, even with all the fancy terms you see and hear. Although for the Flow X13 those claims may hold true. Handling all our outside audio needs are a pair of speakers with Smart Amp and Dolby Atmos. Those two aren’t just for show though as they do produce quality audio, along with virtual 5.1 2-channel surround sound. Highs and mids are good, and lows are present though will leave you wanting more. There aren’t any cracks at max volume and sounds always come out crisp and clear.

Yet we still recommend plugging in your audio gear of choice when playing sound-sensitive games. Titles like FPS such as Valorant, Rainbow Six Siege, or CS: GO. Since speakers won’t really be of help in specifically locating gunshots and footsteps. For slow-paced games though like sandbox, survivals, RPG, and the like, you’ll find the speakers on the X13 more than enough. This is also true with just plain listening to music when taking a break.

A simple keyboard and a glossy touchpad

ROG really wasn’t fooling around in toning down the “gamer”-aesthetic of the ROG Flow X13. Not only do we not have any RGB bling like the Strix series, but the keyboard’s backlighting is also just pure white. Yes, folks, there is no Christmas or disco lighting here, just plain old white. Fans of RGB won’t like this but content creators and professionals will be more than happy.

As for the keyboard itself, you have the standard tactile chiclet keyboard with good feedback and relatively short key travel. Plus, you have easy-to-access media keys right on top for volume control, mic mute, and Armoury Crate. Then you have a glossy clickpad right in the middle of the chassis. The size is just about right to provide ample room for swipes and gestures. That glossy finish also makes it relatively easy to glide your fingers on.

Ports that will leave you wanting more

That’s a total of just two useable USB ports for your peripherals and connections. This is all you get unless you grab the ROG XG Mobile or the external GPU solution for the Flow X13. With the XG you’ll get an additional four USB Type-A ports, an RJ45 Ethernet port, a Display Port 1.4 with G-Sync support, another HDMI port, and an SD card reader. Then again, the XG Mobile is a separate purchase, so you’re going to have to shell out more if you wish to fully take advantage of the Flow X13 ecosystem. This also affects what we’ll discuss next.

Performance that needs a boost

Now let’s talk about the performance of this machine, after all, it boasts it can do gaming. On the CPU front, we have a real beast, the AMD R9-5900HS. It’s more than powerful enough to handle any heavy lifting required on the processor side. As evident with the initial benchmark score it got during our Cinebench R20 tests. The 8-core, 16 thread R9 hit around 4,084 points in the said test. An impressive score for a mobile processor as it’s only a few thousand short of the monster Threadripper 1950K.

However, it’s not the R9-5900HS we have a problem with, it’s with its GPU partner the GTX 1650 Max-Q. It’s bad enough we only have the 1650, what’s even worse is we get the lower-powered Max-Q variant. Although, it’s totally understandable since cramming a more powerful GPU on the already thin and light body of the Flow will only present heating problems. Yet, take a look at what you’re missing, here are our initial benchmarks of a few games with this setup:

All of these games are at their highest presets, some of the lighter ones can be handled by the GTX 1650. However, in the Triple-A territory, it just struggles badly, even with the help of the R9-5900HS. Plus, there’s also the factor of the 4k display, no way will the GTX 1650 support that kind of resolution in gaming. The only way to achieve playable frames is by lowering both graphical settings and resolution. With that, you’ll be giving up the gorgeous visuals of a 4k display.

Then again, you aren’t without options for a power boost here. Like we’ve mentioned earlier you have the benefit of an external GPU solution with the XG Mobile. We haven’t gone through extensive benchmarks of games with the XG connected. Though we are projecting a huge bump in performance seeing as the GPU we have there is the RTX 3080.

The ROG Flow X13 is shaping up to be more of a powerful 2-in-1 rather than a full-on gaming option. You do have some pretty good things going on here. A subtle and professional look, a thin and light frame, a good keyboard, impressive speakers, and a beautiful 4k display. Couple that with flexible modes such as tablet, stand, and tent along with a stylus and you have a pretty good device for content creation and productivity. However, on its own, it pretty much lacks the oomph to be a good gaming option. The R9-5900HS is a monster processor capable of gaming in 4k but the GTX 1650 Max-Q just won’t cut it.

Luckily, we are given an option to bump the GPU side with the ROG XG Mobile. We’ve yet to fully test its performance but we do expect great results. Then again, this is an extra cost to an already expensive machine, after all, the XG is sold separately. So from the looks of it, if you’re a hardcore gamer looking for your next partner then the Flow X13, despite all the gimmicks, may not be for you. On the flip side, if you only plan on just doing some light gaming along with content creation and work, you may want to put this on your list.

We’ll be sure to test the machine further and release our full review in a few days. So watch out for our final thoughts if this one will truly disrupt the market.