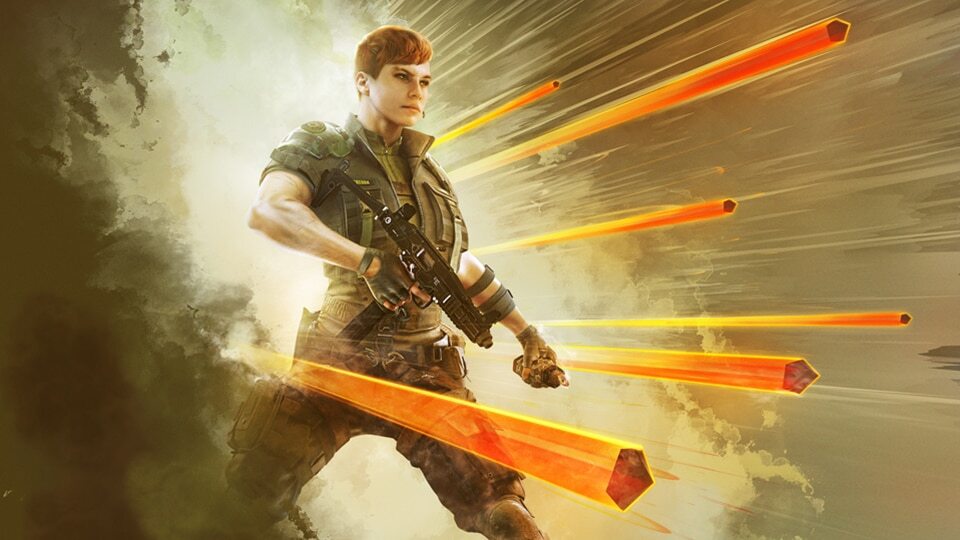 So many stuff (Kind of) coming with R6’s Operation High Calibre Changes!

Rainbow Six Siege’s 6th year comes to a close as we get the full details on the changes Operation High Calibre brings. The update includes additions to customizations, maps, HUD, and more. Let’s see what the team at Ubisoft has in store for players in this ever-growing competitive game.

Of course, we start with the new operator of Operation High Calibre: Thorn. Brianna “Thorn” Skehan is a defending operator. Hailing from Ireland, she grew up on a farm with 4 older brothers, so she has learned all her life to defend herself. Being assigned under Caveira’s team since joining Team Rainbow, she grew a close relationship with the team’s resident engineer: Mira. Mira upon hearing of Thorn’s history designed a gadget fit for her personality. That is defending with a blast, hence why she has the Razorbloom Shell gadget.

The Razorbloom Shell is a sticky grenade like the Semtex. However, upon sticking, it does not detonate automatically. It waits for Attackers to reach its radius and detonates after a few seconds. Be warned, these grenades will auto-kill or DBNO (Down but not out) you when you get hit. Although, it does have a very loud and slow detonation time. Early players have timed this, allowing a fully extended shield-Montagne walk through the entire radius and get away safely.

It may seem simple but that’s where players have to be creative. This gadget gives information, and more importantly, gives Attackers just a split-second of decision-making. The time for them to either find or shoot the gadget, fall back, or push forward, gives Defenders an advantage. Why? Because they will be too busy dealing with the gadget to pay attention to Thorn. Additional slowing gadgets, like Ela’s and Melussi’s, as well as barbed wires will delay attackers from escaping the razorbloom shell’s radius.

Speaking of barbed wires, Thorn’s arsenal, fortunately, comes with one while her alternative is a deployable shield. Her Primary Weapon includes the M870 shotgun, infamous for being Bandit’s and Jaeger’s shotgun. Her other primary is a brand new weapon since Zero’s Assault Rifle: The UZK50GI. This may be an SMG, but it is powerful enough to easily make holes in destructible walls. Her secondary weapons are the 1911 TACOPS pistol and the C75-Auto MAchine Pistol used by Vigil and Kali.

The Map Rework for Operation High Calibre is Outback, featuring massive changes in the bar, motel, and garage. As well as new alternative routes to allow better roaming for players. Take a look at the changes below:

There are also a lot of balance changes for the game in this season…well what game doesn’t? One of the major ones is Finka, who can now revive herself. Aside from actually healing permanent health introduced in previous seasons, this year, Finka has now become a much stronger operator. Making her a formidable support as an Attacker, paired up with her decent guns.

Another major change is sure to put-off some players. Cameras no longer work after a few seconds when placed outside the map. Which includes Valkyrie’s Black Eyes, Maestro’s Evil Eye’s, and Bulletproof cameras. Similar to Mozzie’s drones, they are disabled after a few seconds. RIP Valkyrie’s Cheese Strat (2016-2021)

Yet another major change is a complete HUD Rework which boosts the accessibility for players. The new compass, aside from being bigger, now shows icons of bomb sites or pings. The pings are now icons, instead of just yellow or red dots. This allows for smoother communication among players.

Additionally, the HUD now has all resources shown on a single screen. This includes bullets of the primary and secondary weapons and the number of drones/gadgets/utilities left. As well as operator-specific stuff such as ammo-type and cooldown and resource bars. Even the resource bars have a mini cooldown icon indicating when it can be used again (e.g. Clash’s electro shield.).

This is to allow players to see everything on the screen, removing the need to switch guns to check remaining ammo. Furthermore, button prompts, such as picking up gadgets, vaulting, barricading/reinforcing, now have an icon for their corresponding action. A nice and simple addition to boost Siege’s accessibility for the players.

Customization is now getting a full rework. You can now mix and match elite gears with normal ones. As well as using elite victory celebrations with normal gear. Even allowing changing the operator card in the loading screens. With this, players are now able to express themselves better.

A new class of weapon skins are being added to the game. Exotic Weapon Skins now completely change the design of the gun and animations when in use. Instead of well…just changing its skin. To best understand it, this is maybe similar to a skin released in the past: Vigil’s K1A crossbow skin which completely changed the gun’s design. Now, imagine this but with a unique animation, similar to the victory celebration of elite operator skins. However, when using the gun during the game.

Well, there you go, that’s all you need to know about the R6’s Operation High Calibre changes. The update is now available on the test server and will probably be released officially in a week’s time. So look forward the Siege’s newest season.