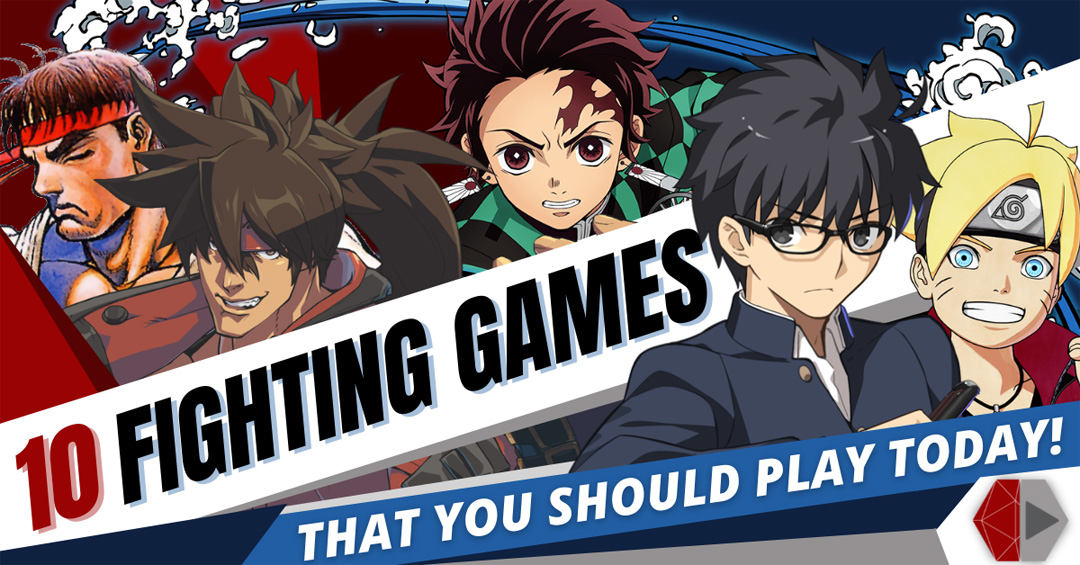 The fighting game genre is one of the classics when it comes to video games. Today, we’ll make you sit down with least 1 of them by giving you a curated list of the best. We’re dividing it into two parts: Newly Released and Old But Gold. Ready? Here are the 10 Fighting Games that you should play today.

Newly Released means are titles that came out this year (2021). They’re fresh from the oven, so you should really try them out!

Guilty Gear Strive is a 2.5D game with an interactive battle system and has a beginner-friendly mechanics that is easy to understand and execute. Released last June 11, the latest installment in the Guilty Gear franchise made a great impression to fighting game enthusiasts. It can draw you in even if you’re not a fan of the genre with its steampunk-like art style and great soundtrack.

An anime art style mixed with flashy 2D fighting game mechanics and Japanese dub, Melty Blood is sure to capture anyone’s attention. Choose from diverse characters and unleash combos with supers on your enemies in classic anime fashion. If you’re familiar, yes it does have the vibe of the Fate series. Anyway, try it out it won’t disappoint!

You surely wouldn’t want to miss an opportunity to play the Demon Slayer video game that came from the hit anime of the same name. Apart from its beautiful and accurate art-style from the anime, the battle immerses you further and will make you want to do a lot of combos and spam supers throughout a match. Beginners to this game will not have a problem as its mechanics is fairly easy and it’s similar to how Naruto Ultimate Ninja Storm works out.

Old doesn’t always mean that it’s forgotten or too late. A lot of games that were released on or before 2019 can still compete with the latest fighting games and are still highly recommended and fun to play.

If you’re a fan of the DC universe, well here’s a game that you shouldn’t miss. Combat is simple, use a mixture of commands to try and achieve combos to fill the meter build-up for access to supers and skills. Even though you don’t enjoy the 2D fighting part of the game, its plotline and animation just makes it worthy of a try. Heck, you can just even watch the compiled cutscenes that is 2 hours long and you got yourselves a movie!

Anyone not too versed with Fighting Games are still familiar with Tekken. One might say that the series is the poster boy of the genre, along with a few others down this list. This classic fighting game franchise keeps evolving through the ages. Tekken 7 attests to that with its high quality graphics and complex move sets. There are characters that beginners can use whose combos are done with just simple commands. However, if you’re up to the challenge, try one of the Mishimas to test your mettle. The game also features a rage drive and rage art system when characters’ health goes down by almost 10 percent. Make sure to block attacks because this is a combo-heavy game!

Much like Tekken, this one is up there as one of the legends in the genre. Say hello to Mortal Kombat, known to never make us fail to tap on our brutal and gory side. Mortal Kombat 11 is the latest installment in series, it follows the story of MK 9 (due to change of management). The combat for this game is fluid and easy to understand. Even if you don’t know how to execute complicated commands, you’ll still surely know how to K.O. someone in Mortal Kombat fashion. Due to its gore, the audience for this game is somewhat divided. Nevertheless, fighting games will not be this famous if not for this franchise. Check it out and see if you have what it takes to make fatalities happen in the game. Fair warning again though, there’s a lot of blood and gore in this one.

Apart from Tekken and Mortal Kombat, another iconic fighting game franchise out there is Street Fighter. We bet that if you’re reading at this point, your parents or grandparents will pop into your mind because they introduced you to this game. Street Fighter V continues its legacy as it brings a more visually appealing look that stays true to its roots. Beginners will surely have fun given that its combat is forgiving to players given that combos in the game are optional.

When people say “Kamehameha”, only 1 thing comes into mind and that is Dragonball. From the hit animated series, numerous games have come out over the years and for us, Dragonball Fighter Z really takes the cake of it all. The game is beginner friendly because you can achieve combos that deal decent damage with just the mash of a single button! Yes, you can just hit 1 button consecutively and you’ll win casually against bots and even fellow players. The game is beautiful and visually appealing due to its colorful effects and particles. You won’t get bored playing this as it offers various modes and challenges that will keep you wanting more.

What do you get when you gather some of the iconic game characters from the most popular Nintendo and the rest of the gaming universe? You get Super Smash Bros. Ultimate! This is the latest in Nintendo’s Smash Bros franchise that lets you play using one of your favorite characters in the video gaming world. The combat is not the usual “get your enemy’s HP down to 0” because it uses percentage as the means to knock them off the arena. The higher percentage, the farther you can hit your enemies away from the battlefield. Unfortunately, this game is available only for Nintendo Switch consoles.

We’re sure that this is not what you expected as there is a much more stable Naruto fighting game out there which is the Ultimate Ninja STORM series. However, we’re giving this game a chance to defend itself since its multiplayer combat system is really worth the try. You can play as one of your favorites in the series or customize and personalize your own. What we liked about this is that you can choose a specific jutsu or fighting style making it way more diverse than the other Naruto game. A match can go up to 8 players on different game modes and it fully utilizes the 3D directions so you can show off your ninja skills. It’s also beginner-friendly so you should definitely check this out!

That wraps up our list! What do you guys think? Let us know if you have any recommendations or if you want to play any of the listed games with us in the comments section. See you in our next list!

Surviving the Unforgiving World of GTFO