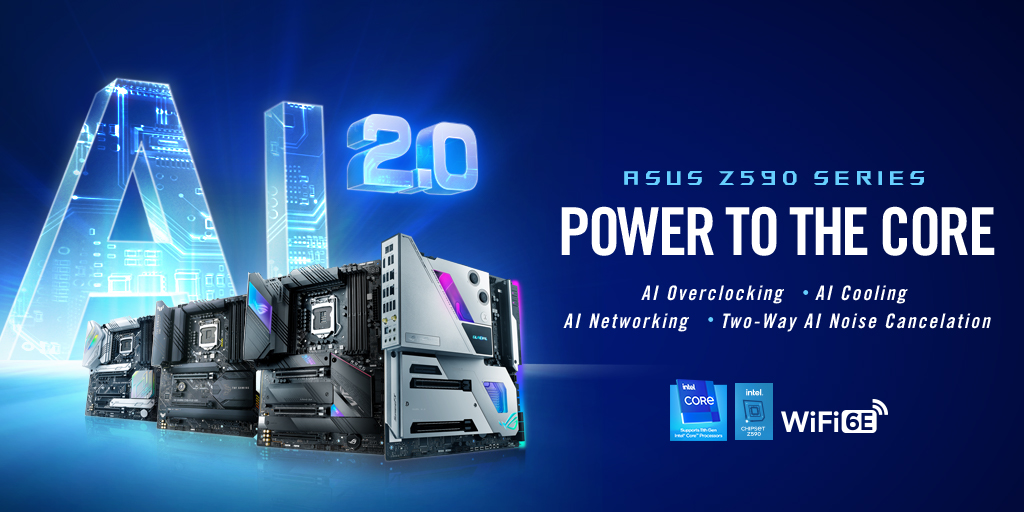 Fresh from the heels of CES 2021, ASUS unveil their complete line-up for the Intel Z590 chipset. The entire portfolio spans the high-end Maximus line all the way down to the more budget friendly TUF Gaming line. All of these boards will be available mid February 2021.

Leading the pack is the new members of the Maximus line. At the very top we have the ROG Maximus XIII Extreme Glacial. Geared towards handling the most demanding overclocking tasks with a sprinkle of liquid cooling. The Glacial comes with a massive full-coverage water block to keep all its components cool and frosty. Then, of course, we have RGB LED control capabilities for those dazzling array of lights.

It is joined by the ROG Maximus XIII Hero and the non-liquid cooled ROG Maximus XIII Extreme. Both of the Extreme variants come with the new ROG Fan Controller module. A hub that fits into a 2.5″ form factor for easy mounting. It comes with six pairs of addressable RGB and four-pin fan headers. Lastly, it has two thermal sensor headers for additional monitoring capabilities.

All three will feature up to two onboard Thunderbolt 4 USB Type-C ports to support all those next-gen connections. Additionally, the Maximus Extremes will come with the ROG Clavis, an outboard USB Type-C DAC for the audiophiles out there.

In addition the PCIe 3.0 and 4.0 SSD slots are sandwiched by heatsinks on both sides. Ensuring heat from these SSDs are kept minimal. ASUS will also unveil a wide range of 500-series boards for the H570, B560, and H510 chipsets. Finally, ASUS will be updating the firmware of their 400-series motherboards to support 11th Gen Core processors.