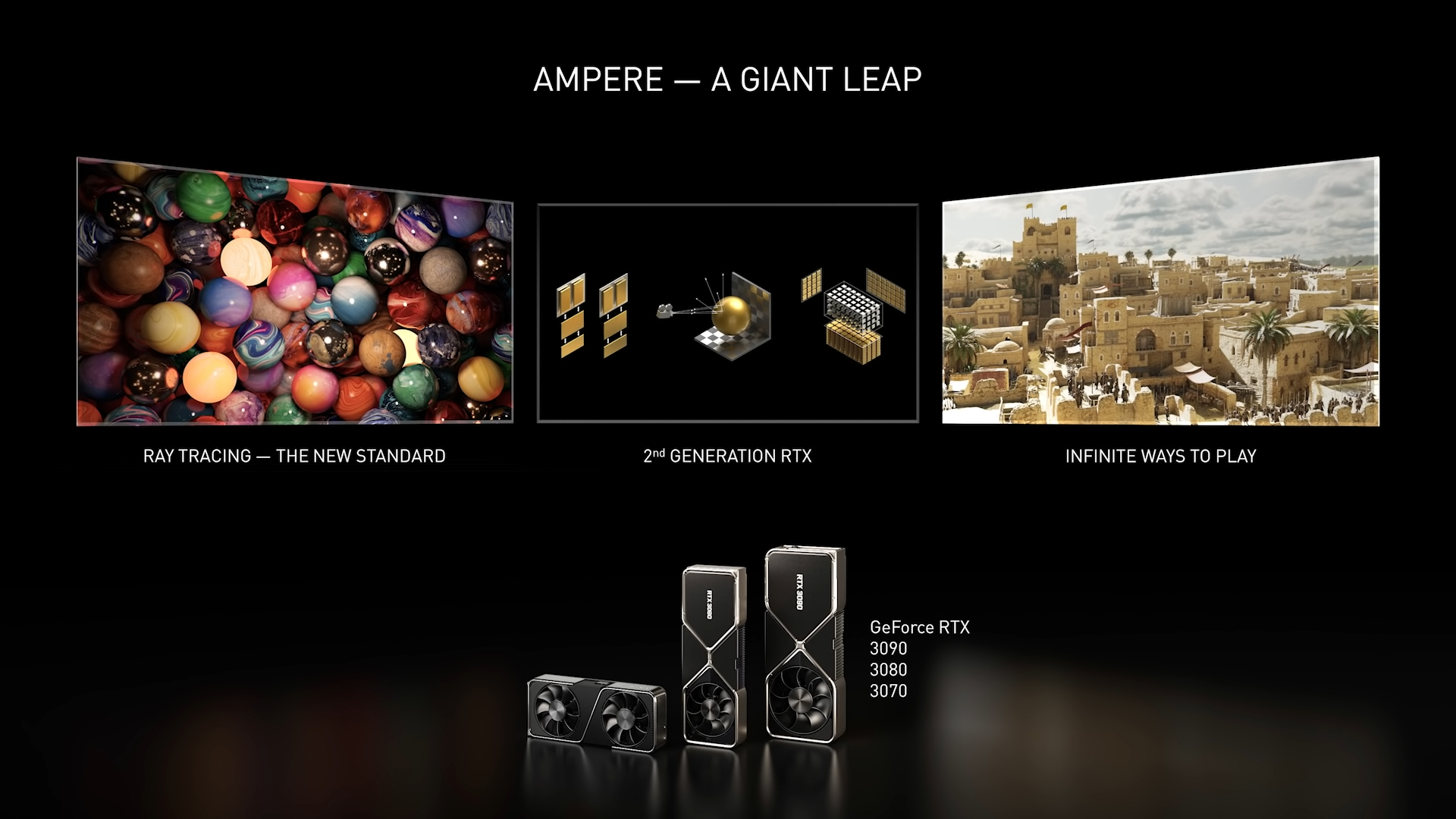 To finish August, Nvidia decided to show us the future of PC Gaming. The Company just introduced their RTX 3000 Series GPUs with the new Ampere Technology. Let’s take a look at each of the GPUs announced.

So what makes the new Ampere Technology special? Well, first we wil have to look at the 3 main technologies for Nvidia’s RTX: Programmable Shading, Ray Tracing, and AI. These technologies are managed by the Shader core, Ray-Tracing Core, and the Tensor cores, respectively. The new Ampere technology, so called the 2nd generation RTX, will have 2.7x Shader Core (30 Shader TFLOPs), 1.7x RT-Core (58 RT-TFLOPs), 2.7x Tensor Core (238 Tensor TFLOPs) than the previous generation of RTX. Combined with 28 Billion Transistors, the new Samsun 8nm NVidia Custom Process, and the new GDDR6X VRAM, this generational leap will allow gaming to move forward.

Now, you ask, what are the tensor cores for? well it is used for Deep Learning AI, one of the most notable applications of this is DLSS 2.0. DLSS 2.0 is a process that allows the GPU to render a game at a lower resolution with the help of AI. It predicts what will be displayed by the missing pixels. Allowing you to play at a higher resolution at the same performance. This allows 4K gaming but with the load of 1080p gaming at 60+ or even 100+ FPS.

Underneath all these techno-jargon, what does it really mean? Well, to sum it up, let’s provide the basic process of how a game is played. In the current generation: The data from the game is extracted from its storage, using the CPU and then RAM. The CPU then decompresses the data and feeds it to the GPU for display.

However, with the new RTX technology, instead of the hassle of using the CPU and RAM, the decompression immediately goes to the GPU and its VRAM. Providing better bandwidth than what was possible with an SSD. This causes it to be more efficient that the current Turing technology being used by the 20-series cards.

Now we move on with the announced cards, starting with their flagship GPU, the RTX 3080. A card with the ampere technology mentioned earlier. Having twice the performance of a 2080 at the same price. The 3080 will feature the new GDDR6 memory and the tensor cores that will allow DLSS 2.0.

Additionally, a new thermal design was introduced. Allowing for a push pull configuration. It both cools the GPU and pumps fresh air to your other components. Then we have another fan to also cool your GPU, and release it. This is an interesting design that controls the airflow within the case itself to, not only cool the GPU, but the rest of your components as well. The RTX 3080 will be available on September 17.

For a better look on how these cards perform with respect to the previous generations, here is graph shown by Nvidia.

For those of you who still have 10 series GPUs, you may ask, why should we upgrade, when the RTX 20 series, was overpriced while only providing small percentage increase in performance. Well, the Ampere technology, will provide double the performance, than when compared to the Turing technology of the 20 series cards, with respect to the Pascal technology, at a much lower price. So if you haven’t decided to upgrade yet, now is the time.

We look forward to future cards announceements, such as if a 3060 will ever come to light or Super and Ti variants. Nonetheless, Nvidia has setup big competition for AMD teams with their GPUs, and with their pricing it seems they also want to compete with the PS5 and Xbox Series X. Looks like the future of gaming seems to be bright, now’s a good time to get into PC Gaming. Don’t even get us started with how the mobile scene will look like. If these performance boasts are true, then laptops will also receive a huge bump.

Here are the official prices for the cards in the Philippines:

A moment of silence for NES/SNES creator, Masayuki Uemura