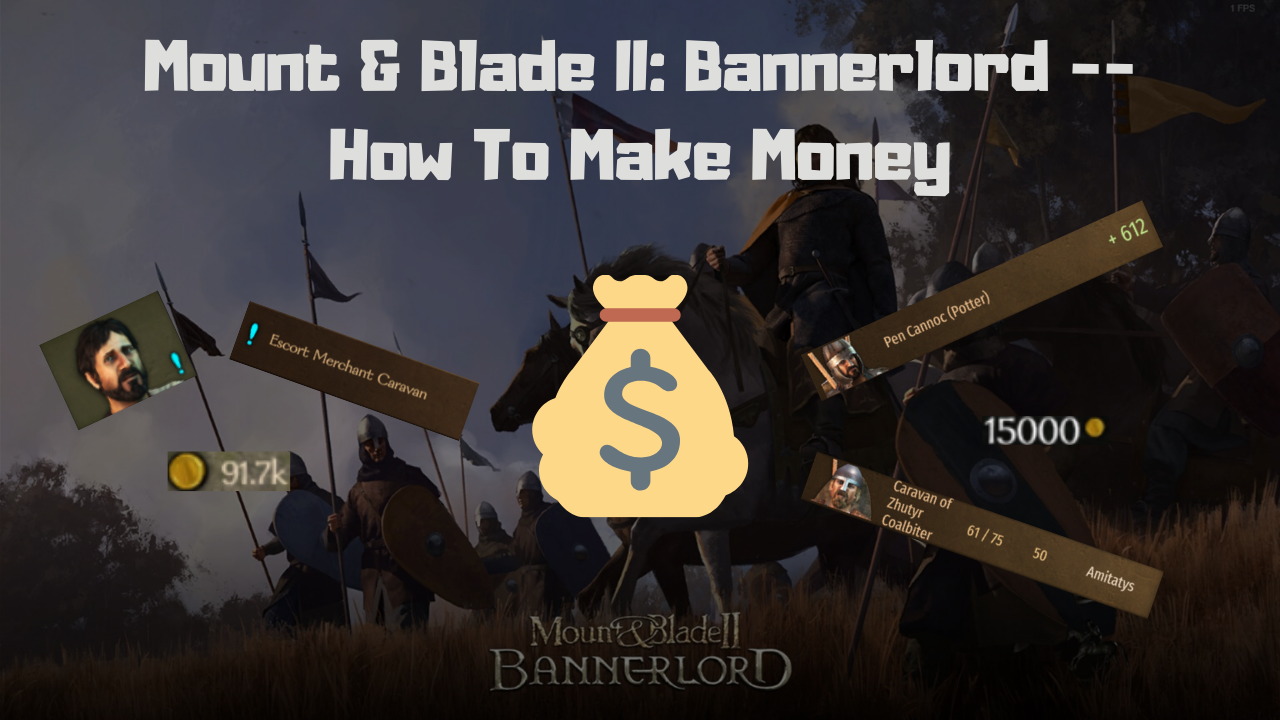 Bannerlord features a lot more ways to make money than its predecessor, we’ll show you some of the easiest when starting out!

Mount & Blade II: Bannerlord released to the clamor of fans about a week ago. While we only got an Early Access version, things are looking mighty fine. One of the frequently asked questions, both for beginners and veterans alike, is “How do you now make money in Bannerlord?”. Well, there are actually several things you can do to earn money. We’ll teach you the easiest methods when starting out in our Mount & Blade II: Bannerlord how to make money guide.

There’s money in Looters and Bandits

This is probably your easiest and most direct way of earning dough in the early stages of your playthrough. Your basic looters are practically peasants wearing only rag-tag shirts and wielding stones. Even in large groups, these thieves are easy to handle and destroy. The loot you get are also not that bad when starting out. After you’ve formed a better party and get tired of our rogue peasants, you can then move on to the stronger bandit groups.

Now, these guys have proper equipment, with some even on horseback. So, be wary when engaging large groups of them as you might lose a man or two if you’re not careful. However, they are still relatively easy to overcome, with numbers or proper tactics. Depending on the region you’re at, these bandits change form. In the mainland, you have the mountain and forest bandits and in the desert, you have the steppe bandits.

Apart from selling the loot you get from them, you can also sell them as prisoners. During combat there is a chance that instead of killing an opponent you’re going to wound them. After a battle, you can grab the wounded as prisoners of war. Take em all when you’re still starting out, the looters may not be much but money is money right?

You can also choose to raid their hideouts to grab the loots they’ve stolen through their rampage. Looters and Bandits are your easy source of money whenever you need some, even at the later stages. After all, they are everywhere and are easy to defeat.

Bannerlord’s quest system are way more diverse compared to Warband. Gone are your tax collecting, letter delivering, and hands-on training shenanigans. Replacing those meager quests are proper rewarding tasks. They are now automatically turned-in too, after your deeds. So, no need to run back to the giver to reap your rewards. This time around nobles aren’t your main source of quests but rather our merchants and gang leaders. Yep, we have gangs all over the world now and they hold great influence over settlements.

Some of the most basic quests you can take while starting out is defeating looter and bandit groups. Most merchant NPCs give out these quests to lessen the threat to their caravans, and for safer trade routes. It’s a basic quest requiring you to defeat one or two looter/bandit parties (increases depending on renown). Since these groups are everywhere you can easily chase after them just outside a settlement. These reward around 600-700 denars per turn in, which is not bad for early players. The other good-paying quest from merchants are the escort caravan ones.

As the name suggests, you’ll be escorting a merchant caravan until it visits two settlements. Now, the payout will depend on the number of days you’ve been escorting the caravan. The highest we’ve ever gotten was 9k denars. However, this took as from one end of the map to the other. So, it does take a bit of time and its mostly just travel. A fair warning though, it won’t be smooth sailing all the time as there will be a bandit spawn in one of the settlements you’re going to visit. The attack will happen the moment the caravan steps out of the settlement.

These are typically large groups of bandits with 40-50 members. They have the same firepower as mountain, forest, and steppe bandits so be ready for a fight. The caravan guard will be joining you though so you’re not alone. Occasionally, the caravan may also get attacked by large roaming looter/bandit groups. These are the easiest most profitable quests we’ve done so far. With the caravan escort having the biggest payout.

Hiring your own Caravan

A new feature introduced in Bannerlord is the ability to hire your own merchant caravan. Yep, you can now live your days as a trader, well one of your companions will. You won’t be the one directly controlling this caravan though as you’ll assign one of your party mates as the master. It will cost you 15,000 denars to start your own merry band of traders. You can do this by interacting with one of the merchants of any big settlement. After which, your caravan will be on its way to travel the world. You won’t be earning big time right away. It’ll take at least a few weeks for your caravan to profit from trading.

This can be a hit or miss too, there will be times when the income is huge, there will be times when it’s not, since the prices of goods fluctuate. There’s also the risk of your caravan getting attacked, though if you assigned quite a capable companion then they’ll easily recruit more guards and defend it properly. So far though, our caravan escapades have been very fruitful and we’re gaining positive income on a daily basis. It also earns bigger than workshops, on its good days that is. Be warned though, if you are at war with another faction they may target your caravan if it passes through their territory.

Product Enteprises make a return in Bannerlord though they are now called “Workshops”. They’ve also changed from Warband and now completely operate independently. You no longer have control over how they buy and use materials. However, they are still a good and constant source of positive income. To buy your own workshop you’ll have to walk around the town district of a settlement and talk to a shop worker. To easily locate where a shop is press the “alt’ key, this will highlight the spots in town. Walk up to any workshop, talk to a worker, then proceed

with your purchase. A workshop will cost around 13,000 to 16,000 denars. You have the choice of retaining the workshop’s produce or change it to something else. Don’t worry, you can easily change the workshop type even after purchase for 2,000 denars. The number of workshops you can have will depend on your Clan level. At level 1, you can have a maximum of two. Now, from our playthrough we’ve noticed the following factors that affect the income of a workshop:

Let’s get into each factor in more detail.

A prosperous settlement is a rich settlement and a hub of bustling trade. This means, caravans will likely flock the settlement and its citizens have enough dough to splurge on items. More caravans means higher chances of traders buying your produce and selling raw materials. The citizen part we’re not entirely sure if it affects workshop income directly.

However, prosperity isn’t permanent. If a settlement gets besieged then obviously caravans won’t be entering its gates. A change in management will also affect a town’s prosperity. This means your workshop in a town recently ravaged by war will likely earn lower than normal.

We found this out when we have two breweries at different towns — Rhotae and Askar. Both towns have two bound villages that produce grain. However, we were earning bigger in Rhotae than in Askar. That’s because Rhotae is more prosperous than Askar, it’s also easier to travel to it since it’s in the mainland.

A good way to determine what workshop to set up in a settlement is to check the primary produce of its surrounding villages. Villagers have to make a living too, so they’ll trade their village’s main product to a town. Kind of like a mini caravan of sorts except they don’t travel the world. So, if a town has villages surrounding it that produce a single type of product then that bodes well for business. For example, in Pen Cannoc, its bound villages all produce clay. So, the most obvious workshop to purchase would be a pottery. Clay will be in high supply in the settlement so its price will be cheap. Meaning, less capital for your potters to, well, pot and more pots for your potters to sell.

Villagers of villages bound to a town will solely trade with that settlement. However, we have villages bound to castles, so how does that work? Well, castles obviously don’t have their own market as their primary purpose is to be fortresses to house soldiers. Meaning, villagers won’t be making money if they bring their produce to a castle. Their best course of action is to sell to the nearest town. If they have two towns relatively close to them, they’ll swap between the two. So, keep this in mind when figuring out the best workshop for the town you’re checking.

Places to set up shop

Now, we’ve done our fair share of research throughout the land checking which towns are best to set up shop. Here are the towns where we currently have workshops that earn quite nicely.

We’ve found other possible towns but we’ve yet to test if they earn as much as our current shops.

That’s about it for your money making strategies when starting out. In the middle stages of your game your main source of money will be from the taxes of your fiefs.