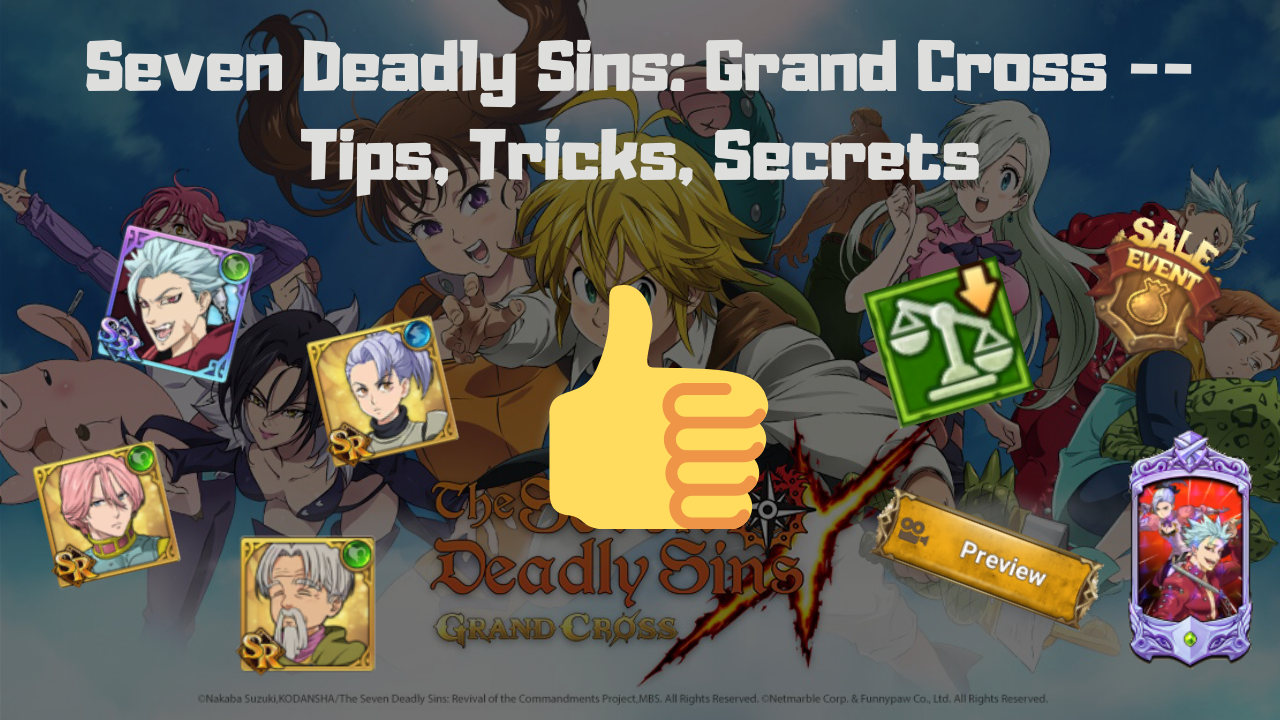 Seven Deadly Sins: Grand Cross is chugging along quite well but it does have some secrets!

Seven Deadly Sins: Grand Cross does quite a good job with its tutorials. Even giving out free rewards after each explanation. However, not all features of the game are given detailed attention. That’s where we come in! Here are some general tips, tricks, and stuff you may not know about Grand Cross.

By the way, you can check out the rest of our Seven Deadly Sins: Grand Cross articles here:

Contents hide
Hero Positioning Matters
Costumes have permanent cumulative bonuses
You can preview a hero’s skillset
Invite Veronica to the Tavern for a selling bonus
Sub Heroes’ Unique traits work even when they are not in active combat
Overall stats affect the bonuses provided by associate heroes
Death Match and Village discount buffs stack
Boss Battle Death Match percentage carries over to the next day
That’s it!

Hero positioning in fights actually matters in Grand Cross. Why? because your initial set of cards is dictated by where your heroes are. To understand better, at the start of a match both of your hero’s skill cards will be present. Meaning you have 6 bronze cards (Rank 1, 1-star) for your team. The 7th or leftmost card will be a random bronze from any of your heroes. However, do also note that your hero’s first skill will be the one spawning first.

So, no, there’s no chance that you can have a silver card at the beginning for your heroes’ second skills. Now, if you wish to increase the chance of starting with a silver first skill card (Rank 2, 2-star) from any one of your heroes, then its best to place them at the leftmost slot. That’s because the leftmost’s hero’s cards spawn first, followed by the middle hero, then the rightmost. Meaning, if that random bronze card matches your hero’s first skill card, then you’ll start the match with a silver.

Unlocked a fancy or hilarious new costume for your hero? Go ahead and wear it! Worried that the bonus of your previous one won’t trigger? Don’t be, because costume bonuses aren’t tied to the costume themselves. They add to a cumulative pool. Meaning, any and all of the costumes you’ve unlocked will add their bonus to your hero’s stats. Well, not all, as you can only register 5 costumes at a time for your hero’s outfit, weapon, and cosmetics. So, our advice? Go ahead and grab as many costumes as you want for customization and register the ones you wish for those stat bonuses.

You can preview a hero’s skillset

Drew a new hero from the Gacha? Why not test out their skills, maybe just for fun, or if you wanna see if they have some use in your roster. The game has a preview feature that allows you to check out hero skills. The preview button will lead you to a training grounds-type of scenario. You can then test out a hero’s skill, all of it from Rank 1 (bronze, 1-star) to 3 (gold, 3-star). Even their Ultimate will be available for you to play with. It’s also a nice way to kill the time, if you just want to chill and check everyone’s skill kit.

Invite Veronica to the Tavern for a selling bonus

Our dear Princess Veronica has a major role to play in the game. She provides a sales bonus for an hour. Meaning, all those sweet treasure chests now sell for more moolah. Even all the other stuff you sell will have that sweet bonus. All you have to do is talk with her and provide a gift, which is random. Of course, Veronica won’t always be available for you to grab that bonus. Well then, how exactly can we call upon her help? Now, if you aren’t aware of it yet, you will have visitors in your tavern daily. These are characters from the game, which you can interact with and increase affection.

A schedule of who will visit the tavern is available at its reception podium. Veronica can randomly spawn as a visitor, but you can actually summon her and replace your current one for diamonds. Don’t fret, you can make her a visitor for free once a day. After that, you’ll have to actually spend diamonds. So, our advice is that when you do have that sales bonus for free, sell all that you wish to sell. Don’t forget to also do this daily, even if you don’t have any treasure chests stacked, bonus gold is still bonus gold, right? Oh and one last thing, this bonus only applies when you sell at village merchants, not when you do it directly in your inventory. So, sell with care.

Don’t sleep on your Sub Heroes, they’re not just there as back-up for when one of your main fighters fall. They also provide help from the shadows as their Unique traits are active despite being on the bench. So, if you have the luxury, use a beneficial Sub for your current combat needs. Such as Cain for Death Matches as he provides a 10% atk-related bonus for your party and Gilthunder for PvP, thanks to that 30% def-related stat bonus.

Ever notice why sometimes heroes without any association with your units provide bigger bonuses that those who have? Well, that’s because a percentage of your assosciate unit’s overall stats are added to the main hero. This is apart from the 1% bonus you get for each level of the associate’s Ultimate. As an example, check out my Adventurer Ban with two different Jericho associates. Both are SR combine attack associates, yet one of them provides a bigger bonus.

Notice how the Level 1 New Generation Jericho has a slight advantage over the Lv. 12 Adventurer Jericho in bonuses. That’s because I have the New Generation geared-up with two equipment sets. If I remove those equipment sets, you’ll notice that the Lv.12 Adventurer Jericho now provides a bigger bonus. So, when you have the extra resources, take time in gearing and leveling your associates.

Boss Battle Death Match percentage carries over to the next day

Often times spawning a Death Match isn’t much of a problem. After all, they sometimes spawn instantly or jump from a small percentage to 100%. However, there may be instances when you truly have to grind for that spawn. If you’re worried that that progress resets along with the daily refresh, don’t be. Your progress carries over to the next day, so you can still continue where you left off.

That’s about it for our tips, tricks, and secrets. If you think we missed out on something, do give us a bump in the comments section below. We’ll add those tips to the list as well for our fellow gamers.

Contents hide
Hero Positioning Matters
Costumes have permanent cumulative bonuses
You can preview a hero’s skillset
Invite Veronica to the Tavern for a selling bonus
Sub Heroes’ Unique traits work even when they are not in active combat
Overall stats affect the bonuses provided by associate heroes
Death Match and Village discount buffs stack
Boss Battle Death Match percentage carries over to the next day
That’s it!