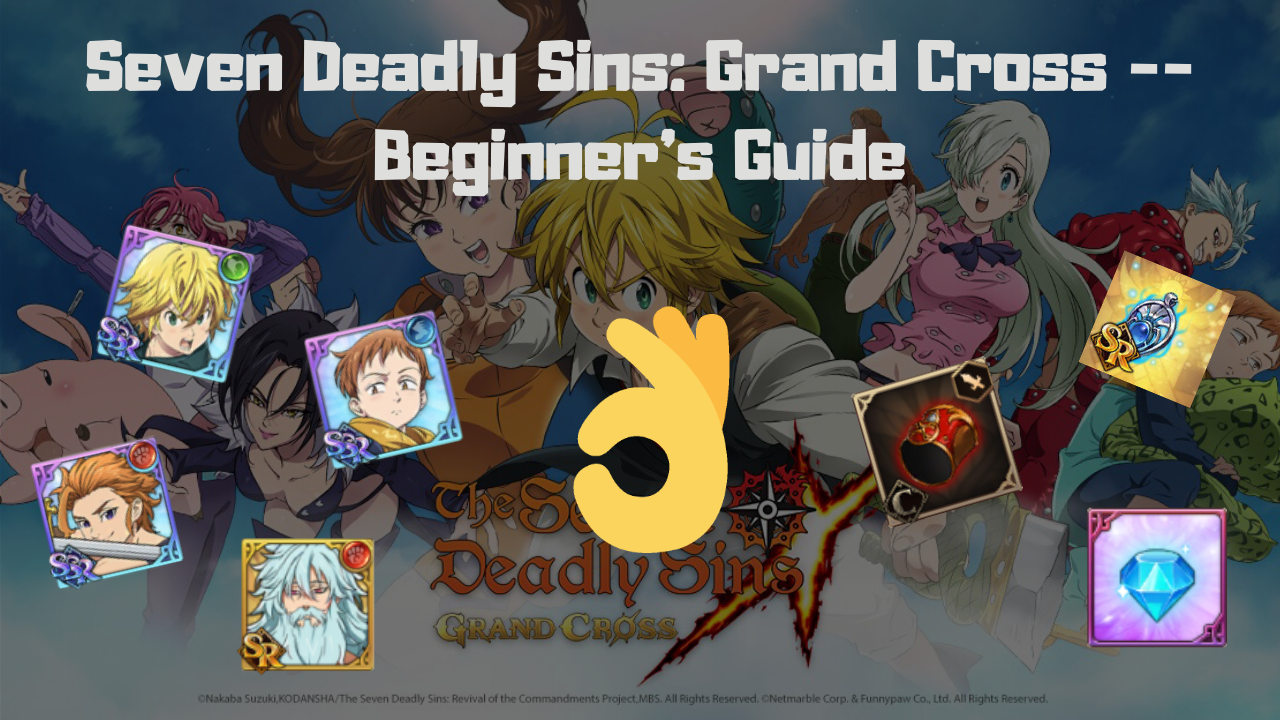 Seven Deadly Sins: Grand Cross released about three weeks ago to the delight of both its Anime and Manga fans. Little did we know though that it can cater players outside of that spectrum. Check out this article of ours to know why this game is just so good, even if you ain’t a fan. Now, if you’re one of the new bloods entering the realm of 7D: Grand Cross, you might get overwhelmed by the sheer amount of content. Don’t fret, we’ve got your backs! Read on for our Seven Deadly Sins: Grand Cross Beginner’s Guide.

Check out the rest of our Grand Cross Articles here:

Reroll if you want to

Now, we here at Dice & D-Pads have a fair share of game purists and, should we say, opportunists. Meaning, there are some of us who prefer playing games straight on and just believe. Then there are some of us who take the time to restart or, in this instance, reroll for a good beginning line-up. We do understand that there are those who are not very fond of this procedure. However, for those of you who do practice it, and there’s no problem in that, Grand Cross has a gift for you.

Usually rerolling takes a lot of time in most games as it often requires redownloading everything. However, Seven Deadly Sins: Grand Cross removes that hassle by allowing players to reset just their save data, inside the game itself. So, rerolling is quick, easy, and painless. To do so, just head on over to the settings tab, then player info and tap on “reset data”. This will delete your current save and bring you back to the beginning. All without the need to redownload.

Ok, suppose you do wish to reroll, among the currently available heroes, who do you aim for? The two most recommended starters for faster story progression are HP Seven Deadly Sins Meliodas (Green) and HP Forest Guardian King (Green). Although Green Meliodas is still your best bet. Another good starting SSR hero is Strength Camelot’s Sword Arthur (Red), but he’s more of a support than heavy damager.

So, we suggest you aim for the HP Meliodas and King. The other SSR heroes aren’t necessarily bad such as Slater and Jericho. However, those two are cash shop units, so they’re easily obtainable. Plus, our main goal for your starting line-up is for story progression, we’ll explain why in the next segment.

This one we cannot stress hard enough. Not only is the story an enjoyable snippet game graphics version of the Anime, and a huge source of various rewards, it’s also where you’ll unlock most of the important game features. Not to mention, some chapters reward you with free heroes, one of which is even a staple for almost all the content. So what are these important features you’ll get once you progress through the story?

You’ll unlock four facilities, or functions rather, from the story. These are — better cooking options through Ban, equipment salvage through Diane, sales calculations through Hawk, and most importantly, item exchange through King. All of which are vital if you wish to strengthen your heroes.

Each chapter will have its corresponding village. These villages are home to multiple shops that will be of great aid to you in farming. Namely the Materials Shop, Equipment Shop, and Pop-up Shop. We’ll explain more of how to further unlock these shops later. For now, these are their functions:

Chapter 4 opens up the game’s PvP. So if you’re a fan of that then you have another reason to work through the story. However, even if you’re not a fan of PvP, we urge that you at least regularly participate. Why? Because this will be your main source of diamonds on a weekly basis. Depending on your rank, you’ll be awarded with a set number of diamonds and boxes for the PvP equipment draw.

This will be your main Demon Blood and Water of Life farming source, the materials needed for awakening. As well as specific Orbs, the sixth piece of equipment. The only other place you can get those are at village equipment shops. Then, occasionally, standard awakening materials also drop from these battles. Although, we don’t recommend you farm them here as there are better stages to do so. Most importantly though, this is where you fight to spawn a Death Match. What’s a Death Match? It’s the game’s raid mechanic.

Death Matches are unlocked upon reaching Chapter 5, which is a little further down the storyline. They are the only source for demon horns, which are used to increase a hero’s max level through the Limit Break feature. It’s also the best source for high rarity Demon Blood and Water of Life. They are rather fun to play too, as you are now joined by another player.

So this is actually the game’s co-op feature. Albeit only limited to two participants. When doing Death Matches, communication between the two players are vital. As such, we recommend you set up the stickers you acquire via the death match achievements to create a proper communication channel. We’ll write a separate guide for these matches.

Technically not unlockable features, but these strong heroes are tied to the game’s story. Namely Speed Sin of Sloth King (Blue), Strength Undead Ban (Red), Speed Sin of Envy Diane (Blue), and Strength Boar Hat Tavern Elizabeth (Red). Blue Skinny King, most of all, is a truly powerful unit you’ll be using for the rest of the game. Be it in story progression, PvP, Boss Battles, and Death Matches. His skill kit is just truly extraordinary.

The rest, on the other hand, all have their special uses — Diane is a strong PvP unit, Ban is great for stalling as he removes an ultimate gauge orb, and Elizabeth is a solid healer with an attack disable debuff. You can acquire them at these chapters:

That’s a lot of features eh?

As you can see that’s a lot of content all hidden behind the story chapters. So once again, we all urge you to prioritize the story up until at least Chapter 5. So that you’ll have the early and mid-game features unlocked. Chapter 6 is rather special and quite hard, but it is where you’ll unlock Knighthoods or the games guild system. However, that’s no longer for beginners so we’ll talk about that in another article.

Focus on a core team first

Right, suppose RNG loves you to the point that you draw a ton of good SSR heroes. As resource is still pretty scarce for you, we recommend you focus on a single team composition first. If you followed the reroll steps, then ideally your team should look like this: Green Meliodas, Blue King, Green Elizabeth (Free)/Red Ban (Free), Flexible Hero (ideally a supporter like Green Gilthunder).

If you don’t have Green Meli, then use any good damage dealer as an alternative and the same for the rest of the spots. You’ll encounter little problems clearing Chapter 3, so you’ll definitely grab that King with ease. Don’t worry too much about Death Matches or creating a team for each attribute. You’ll have time for that once you complete the story, draw more heroes, and unlock most of the farming spots.

Right, if you find yourself having a bit of trouble with the main story then maybe its time you pay attention to the Villages. As we mentioned earlier, Villages have their own level system, this is the game’s, should we say, side quests. Remember those shops? The content they sell will all depend on the Village’s level. Not to mention, the equipment and pop-up shop only appear at Village level 2 and 3, respectively. Plus at Level 1, the materials shop only offers ingredients.

Our recommendation is to level a village up until Lv.4, so that you’ll unlock most of the important early level awakening materials and the pop-up shop. Don’t worry, leveling a village isn’t that hard to do. You’ll even open up the free stages where you can regularly farm ingredients and awakening materials. All you have to do is follow the Blue quests given by villagers. Completing all of these will level that village up until Lv.4. Getting to Lv.5 will then require you to do repeatable quests. Although, as we’ve said, if you’re just starting out then reaching Village Lv.4 is your main goal.

Pay attention to the events and notice tab

In a week the game has rotating small events you can check at its events tab. These vary from finishing free stages, enhancing equipment to joining PvP and participating in death matches. One thing’s for sure though, they offer abundant rewards, especially for starting players. These include enhance pots, awakening materials, and enhance stones.

More importantly, they are a good source of free diamonds. Be sure to also take a peek at the notice tab to check which stages have some perks. For example, last week all boss battles have half the stamina costs and Fort Solgres’ gold gain was double.

Hold off on max upgrading R, SR, and SSR gear

We’ll provide a more detailed guide for equipment. For now we’re recommending that you hold off on pouring your resources to R, SR, and SSR gear. Why? because the gains from fully upgrading a mere C gear to fully upgrading an R gear is minimal. Not to mention, upgrading an R gear costs a ton more gold than a C gear. Don’t even get us started with SR gear as those not only require gold but diamonds too if you want to make full use of them. SSRs, while the best in terms of providing raw stats, are hella expensive to upgrade. The best thing to do, for now, is to upgrade them to just +5 and not awaken them.

Right, so the general rule when starting out is for your left-hand side gear (Bracelet, Necklace, and Belt) to be +5 0-star SSRs. Then your right-hand side (Ring, Earring, and Orb) to be fully upgraded C gear. This is because the left-hand side gears have higher base stats than the right-hand side ones. Do note that when awakening a gear you’ll also unlock a secondary stat for it. This is where C gear shines as they require minimal resources to fully upgrade. Yet the bonuses are hefty. You’ll also only need small amounts of gold to reroll the values. The rule of thumb for secondary stats when starting out are as follows:

Keep your Hero Coins as currency (Silver, Gold, and Platinum)

Unless RNG truly loves you and blesses you with multiple duplicates, we suggest you keep the coins you get from draws. As you may have noticed, whenever you draw a duplicate hero they turn into a coin. Silver for R, Gold for SR, and Platinum for SSR. Their main use is to upgrade that particular hero’s ultimate move. However, their more important role is currency for the game’s coin shop. These coins have far better value when used to purchase heroes that they are as ultimate move fodder. That’s because some of the game’s top tier units are purchasable from the coin shop. Like Jericho and Slater, whom we’ve mentioned earlier.

That’s about it for our beginner’s guide, we’ll talk more about the other features of the game in separate articles. So, stay tuned for our equipment, Knighthood, Death Match, and general tips and tricks guides. Happy hunting and enjoy farming guys!