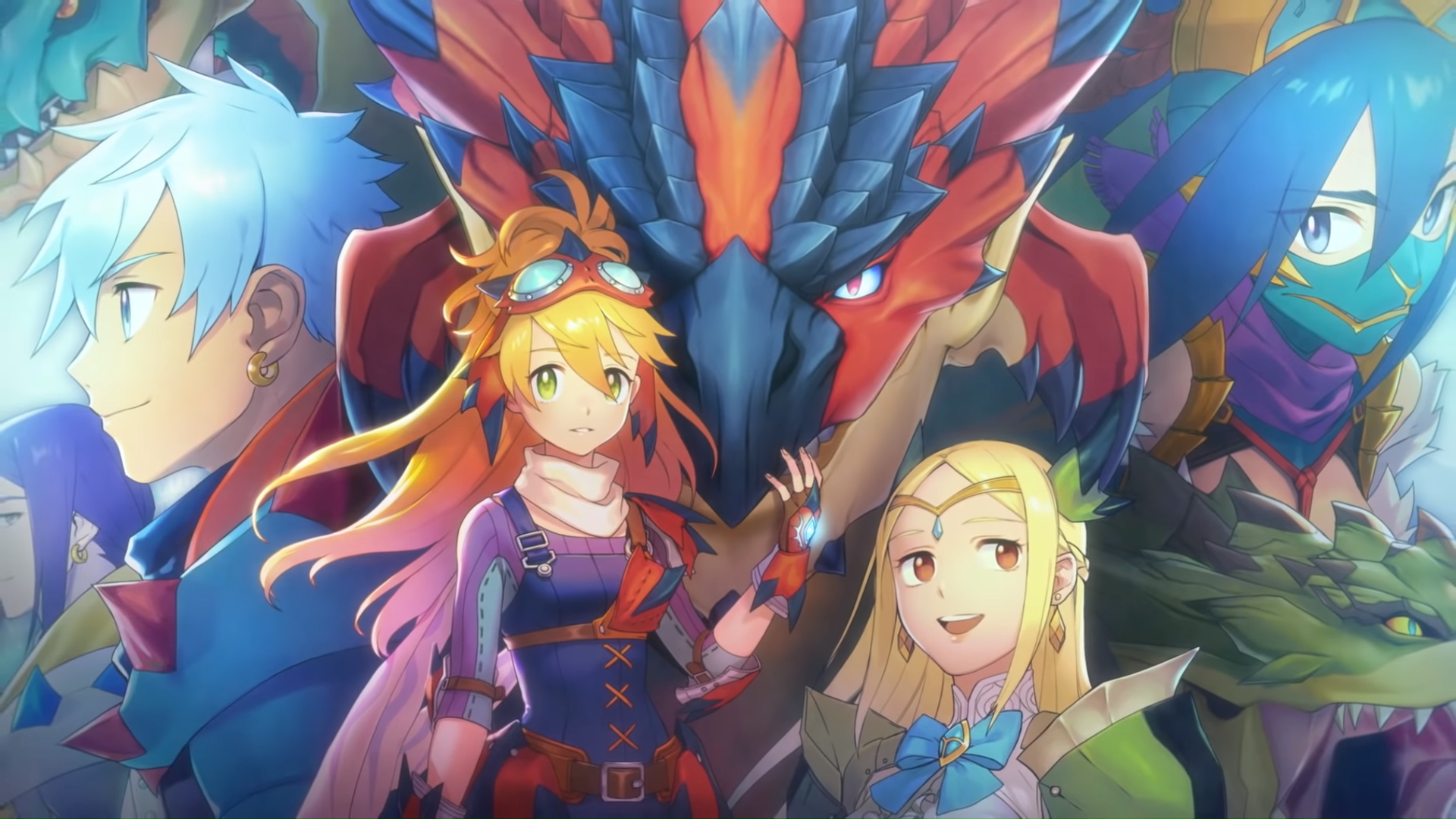 Monster Hunter Riders released earlier than expected to the delight of Japanese fans or English too, if you know how to get it. However, it uses the infamous Gacha system. Does it fall victim to the system’s quirks or can it offer more?

Author’s Note: While we were able to play much of the game, some of its features are still unknown to us since the game is in Japanese. So, some of our explanations here may be lacking.

Monster Hunter Riders borrows the visual artwork of MH Stories. So, we’ve got some colorful sprites, animations, and less ferocious-looking monsters. If you’ve been a fan of the Stories visuals then you’ll be delighted with what Riders has to offer. As for menu icons and hunter models, well they fit the overall “cutesy” theme. Especially the Hunter sprites in menus as they’re encased in marbles, making them look like proper collectibles. Not to mention, the monster sprites are cute little versions of themselves.

Apart from borrowing art from Stories, Riders also grabbed a few of its soundtrack. Some of the combat music is straight out of the Stories audio repository. The rest though are original but still has that familiar Monster Hunter essence, if you know what we mean. There’s also voice acting in cutscenes and some parts of the menu, which is much appreciated. Of course, the monster screams, attack sounds, and death wails are also included.

This is yet another aspect that the game somewhat borrows from Stories. Similar to the 3DS title, Riders uses a turn-based combat system. However, it took away the rock, paper, scissors mechanic and exchanged it for a more traditional turn-based system. Before hopping into actual combat gameplay though, let’s take a look at what other features the game has to offer.

In Monster Hunter Riders, the Hunters and the Monsters work hand-in-hand during combat. Much like what we’ve experienced with Stories. However, we’re now building a team of 3 Monster-Hunter (Pun intended!) pairs as opposed to just a single team-up.

Contrary to what you might’ve expected, the Hunters are our Gacha characters in Riders. Maybe because you have a lot more customization with them than with Monsters. Anyway, much like any other Gacha game our Hunters are divided into rarities, depicted by their number of Stars and Color. 3-star or Bronze Hunters are generally your weaker ones and 5-star or Gold Hunters are your strongest. As usual, the higher the rarity the harder they are to get.

As is the nature of Monster Hunter our Hunters are equipped with different weapons and armor. Each Hunter will have their own armor set and weapon. These sets will also determine what element the Hunter’s skill kit will be. Generally speaking, a Hunter using a Rathalos Set will most likely feature fire skills and an accompanying Rathalos weapon. In the beginning, a Hunter will only have access to a few of his/her skills. Unlocking the rest will require them to be leveled-up. This includes both active and passive skills.

Hunters can reach up to Lv.70, however, this will require a special resource. These resources can either be a general one or acquired through getting duplicates of the Hunter. Another method of upgrading a Hunter’s stats is through the gift system. Basically, there is a stage where you can farm gifts to give to a Hunter. You can increase their stats up to ten levels via this system. A Hunter’s stats also gets boosted when paired with a Monster of the same element. Similarly, pairing a Monster that matches the Hunter’s set increases stats even more.

Monsters, unlike Hunters, are acquired through quests, with some given out as rewards. A rarity system is also in place similar to what we have with Hunters. Since they’re not part of the Gacha system, there’s a normal quest line for farming them and event ones, like the Lagiacrus.

Similar to Hunters, they can also be upgraded up until Lv.70. Although, Lv.51 onwards is locked and requires a special resource obtained through quests. However, that’s about it for upgrades as they have no gift system. Monsters also have their own set of active and passive skills.

Right, we’ve been mentioning quests for quite a bit now, so let’s get into those. For quests, you have the following. Athough, we don’t really know what they’re called so we just made our own categories:

An added feature for farming materials is Expeditions, though we’re again not entirely sure if that’s what its called. Anyway, expeditions net players materials based on the Hunter and Monster pair they sent out. These include the normal upgrade materials, money, dash juice (stamina recovery item), and the special resources for increasing max level.

Onto the meat of the matter — actual Combat. As mentioned earlier, Riders features a turn-based combat system. However, it uses a more traditional one. Replacing the rock, paper, scissors we saw in Stories is a skill charge system. Turns are also based on speed rather than having each party take, well, turns. Meaning the higher a unit’s speed stat the earlier they get to move.

Each turn units recover a set amount of “SP” for skill use. We’ve yet to encounter instances of recovering more than 30 a turn though. Perhaps there’s a skill that boosts SP recovery, but for now, we’re assuming that’s the common amount. There’s also something similar to Kinship Moves in Stories. However, instead of like an ultimate move, what it does is just boost the damage of the next attack.

As this is MH, Monsters have their corresponding Elemental and Status weaknesses, with varying levels of effectivity (from -100 to 100%). The same applies to the player’s party, so you have to be careful in forming your squads. Although, Hunter’s themselves don’t have innate weaknesses. That will instead be dictated by a Hunter’s partner Monster. You can easily check out the elemental and status weaknesses of your enemies by tapping on them, which is quite helpful.

In normal cases, there won’t be a need to talk about a game’s auto system. However, it warrants an explanation in Monster Hunter Riders. First up, during quests, there is an option to speed up combat to up to three times the normal speed. Then, there’s a toggle for full auto control, with two levels. The first toggle (greyed out) will have the player’s party perform just their normal attacks. The second toggle (gold), on the other hand, will initiate auto skill use. Although, the AI will only use the lowest SP cost skill whenever it becomes available.

Lastly, there is an option for auto repeating quests. Choosing to do so will initiate an auto loop, where the AI continuously repeats the chosen stage. However, maybe due to the language barrier, we haven’t figured out how to cancel this loop or if there is even a way to do so. If there isn’t a way to cancel, then once initiated, the auto-repeat will only stop when stamina is depleted. If you’re looking for a quest skip function, then you’re out of luck as Riders is without one.

If ever you’re wondering about the paywall. Well, Monster Hunter Riders follows the common pricing for Gacha titles. A 10-pull in the game requires 1,000 gems, the package that will net you that amount (1,040 gems) is priced at $26.50 (~Php 1,345). Then you have some deals which not only give gems but also upgrade materials or even summoning vouchers as well as those monthly/weekly packs.

However, the worst feature of Monster Hunter Riders in terms of handling their premium currency is that free and paid gems are managed separately. Meaning, they must be spent individually. So, if you’ve been thinking to buy just a few gems since you’re about a pinch away from 1,000 with your free ones, think again. Yet there is some form of consolation as we are given a free daily pull on the standard banner

Monster Hunter Riders is a proper turn-based Gacha title. By proper, we mean the whole infamous package — An energy system, grinding for upgrades, and encounters with RNG. Sadly, it doesn’t bring anything new to the table apart from being a Monster Hunter title. It does have that amazing artwork and lovable soundtrack. However, that’s all it can truly offer and only fans of the series can truly appreciate that.

While we do personally enjoy the game, we can see how this might not appeal to many, including fans. After all, even if you do love Monster Hunter, an alternative for Riders is already out there in the form of Stories. That one is devoid of microtransactions and is priced as much as a 10-pull in this game. However, if you are a fan of both Monster Hunter and Gacha or can tolerate this infamous system, then Riders is a perfect match for you.