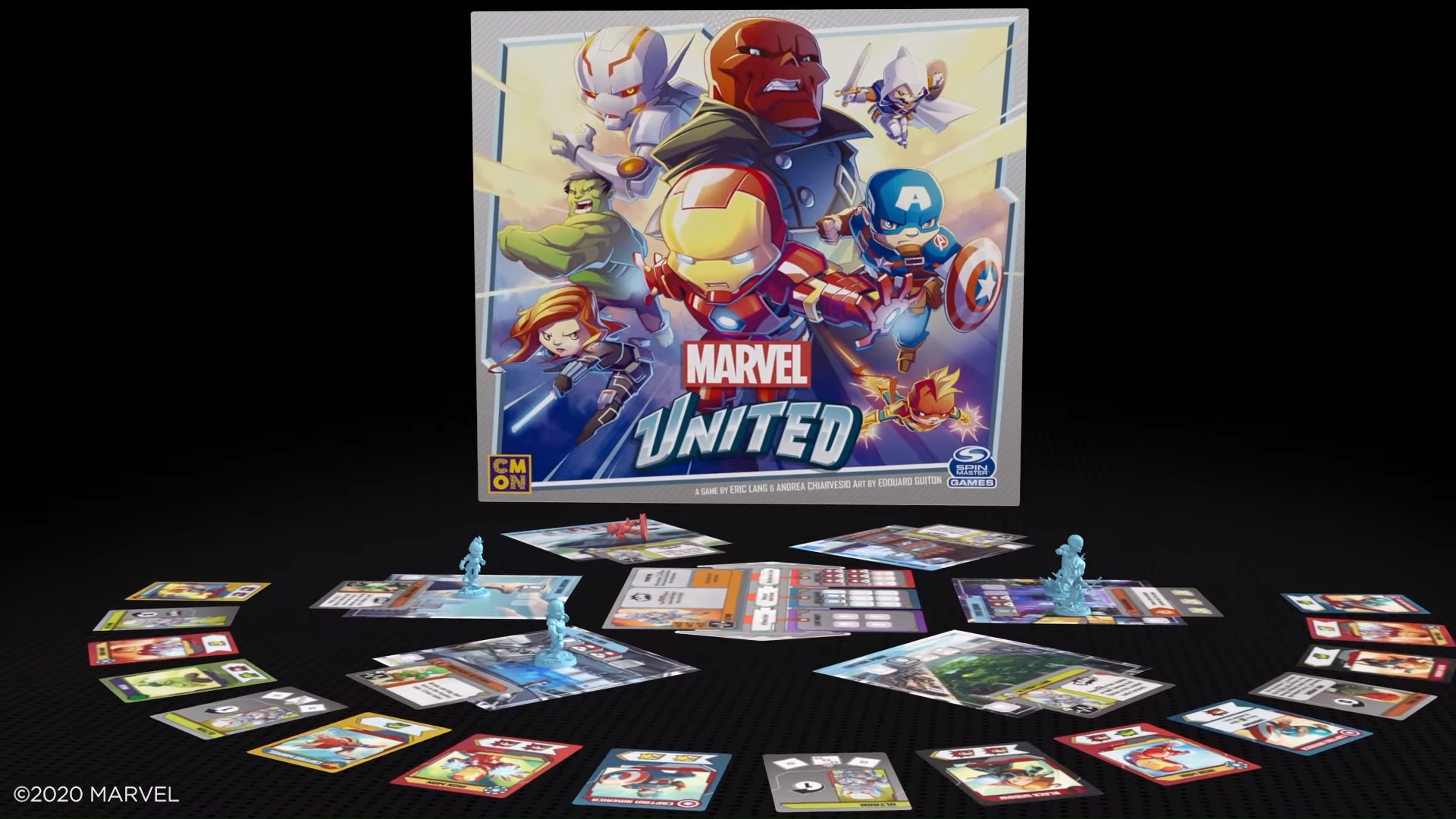 After a good set of teasers these past months, Cool Mini or Not (CMON) finally opened the Kickstarter campaign for Marvel United. The game sees our favorite heroes turn into fierce Chibi miniatures and cards.

At the helm of the development were Eric M. Lang (Blood Rage, Rising Sun) and Andrea Chiarvesio (Kingsburg). Marvel United is a fast-paced cooperative title for 2-4, where players control Marvel’s chibified Super Heroes. In true Marvel fashion, the adversaries are the known villains from the iconic comic universe. Face-off against Red Skull, Ultron, Task Master, and more as you unravel their plan during the course of the game.

The gameplay is simple yet intuitive as the players and the villain AI take turns placing cards on the board. Speaking of cards, each Hero and Villain will have their own unique playing deck. Heroes will have cards representing actions and abilities, while Villains have their own set of cards for abilities as well as a Masterplan Deck.

To start off, players choose their heroes and six locations to create the game board. Then choose the Villain they’ll be facing, revealing the top card of the antagonist’s Masterplan Deck. Afterwhich, the players and the villain alternate adding cards to the board creating a storyline, which can either end in the defeat of the villain or their victory. During the course of the game, Villains will also introduce new elements to locations. These can be Thugs, Traps, Civilians, or any other devious plots, which the heroes must face or save.

The cooperative nature of Marvel United is actually quite unique as it extends far beyond the normal “work together” concept. Hero cards are somewhat linked as players will be able to use any of the bottom actions of previously played cards. Meaning, it’s a lot more rewarding to time and plan your party’s sequence of actions. The ultimate goal of the game is to thwart the Villain’s masterplan and defeat them directly. However, in order to do so, players must complete missions before having the opportunity to face their adversary. These are tasks such as rescuing Civilians, beating up thugs, and clearing threats.

Coming in as a Kickstarter Exclusive expansion is The Infinity Gauntlet. The expansion shakes up gameplay by introducing a campaign-like system. Players will engage in a sequence of matches, facing either the Children of Thanos or the base game villains, with the goal of preventing them from gathering all Infinity Stones. The stones are then placed in the Villain’s Masterplan Deck, when drawn they are given to Thanos.

If all six falls in the hands of Thanos the game ends. During the course of the mini-campaign, Heroes have the chance to gain Power-Ups. After going through the sequence of matches, the final battle with be with Thanos himself. All of his collected stones, as well as the Power-ups heroes have gathered, are put into play. The campaign is still in its early stages, as such CMON has plenty of time to tease all of us. Including, seemingly previewing the arrival of the God of Thunder at the end of the game trailer. Either way, we have about 21 more days. So, if you’re a fan of both CMON and Marvel check out the campaign here.