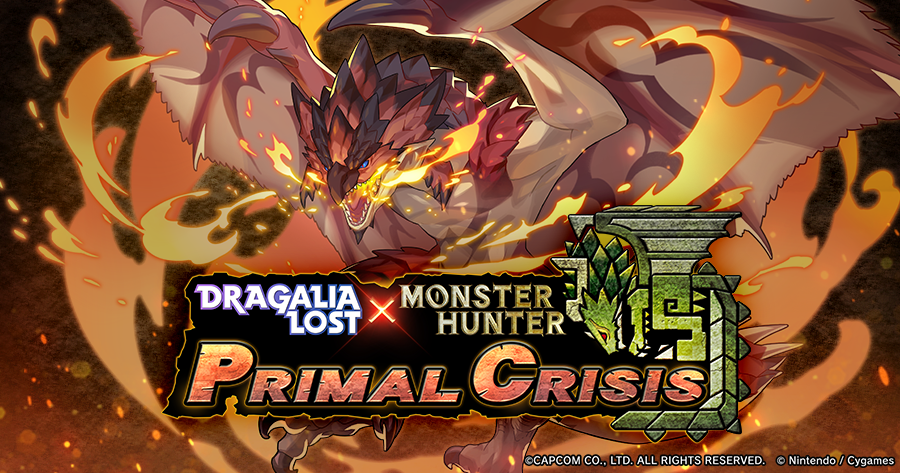 It’s time to get your gear on as the Dragalia Lost x Monster Hunter Collab, Primal Crisis is now live!

Announced back in December, Dragalia Lost’s collab with Monster Hunter, dubbed Primal Crisis, is now live. The event will run for about 18 days and is split into two summon showcases.

Primal Crisis will have players fight Rathalos and the iconic Legendary Black Dragon, Fatalis in Solo, Co-op, and Raid Modes. Coincidentally, Fatalis is also included in the Part One summon showcase alongside two Dragalia Units donning Monster Hunter Armors — Hunter Berserker (Rathalos Set) and Hunter Vanessa (Kirin Set). Additionally, players can grab Rathalos as a free 5* Dragon via Blazon Summons. The event is a treasure trove of materials as it awards all types of elemental upgrade mats. Apart from that, Rathalos and Fatalis both have no element, meaning players can form a party of their strongest units and not worry about elemental advantage or disadvantage.

The background music of the game has been changed into the Monster Hunter theme. Not only that, but the raid event UI is also fashioned to resemble the icons of Monster Hunter. Even the quests are in MH style as you have Low Rank, High Rank, and G Rank types. To push the collaboration even further, there are small tidbits of changes in the raid boosts icons as well as some exclusive MH items. It even includes Rathalos and Fatalis exclusive weapons as well as their materials as the treasure trade items. Dragalia is looking more like a pocket Monster Hunter game thanks to this collab. They also did a mighty fine job with the music, icons, and sound effects. If you wish to take part in the on-going collab check out the download links for the game below.

The ROG Zephyrus S GX701 a.k.a The World's First 300Hz gaming laptop is now in the PH