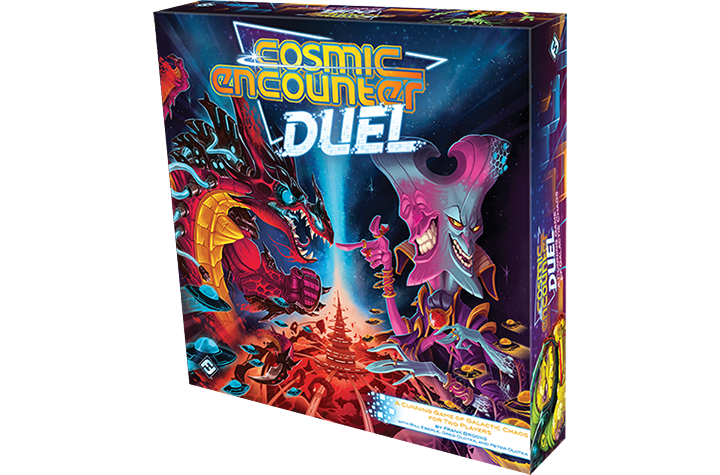 The next Cosmic Encounter title is a competitive standalone!

Cosmic Encounter is often played by 3 or more players. Although now, Fantasy Flight Games (FFG) aims to reduce that number to just two with the introduction of Cosmic Encounter Duel.

Cosmic Encounter has been one of the longest-running franchises in the tabletop market, dating back to the First Eon edition in 1977. Previous iterations had players control an alien species with the goal of establishing control over the universe. This is done through intrigue, alliances, deals, and the occasional double-crossing.

Cosmic Encounter Duel takes on a different approach though. This time around, the goal is to join the Cosmic Citizenship Council by being the first to control five planets and become a Civilization. In order to do so, you must knock out the competition in a one-on-one battle. True to the Cosmic Encounter formula, the game will feature 27 new alien species, each with their own unique abilities.

Unlike in previous editions, Destiny Cards now hold a more direct role in the flow of the game. You have three different categories for Destinies — Discovery, Event, and Refresh. Players will simultaneously take turns drawing and resolving these cards. Discovery introduces a planet where the players will duel out for control. Events are a variety of challenges and cosmic calamities players have to face.

Then Refresh cards offer breathing room for players to recover ships, gather allies, and prepare for the next duel. Apart from the core set, FFG created a Cosmic Encounter Duel Gamemat as an accompanying accessory. Cosmic Encounter Duel is now available for pre-order at your local retailer or over at the FFG website (login required). Pricing and availability are yet to be announced.